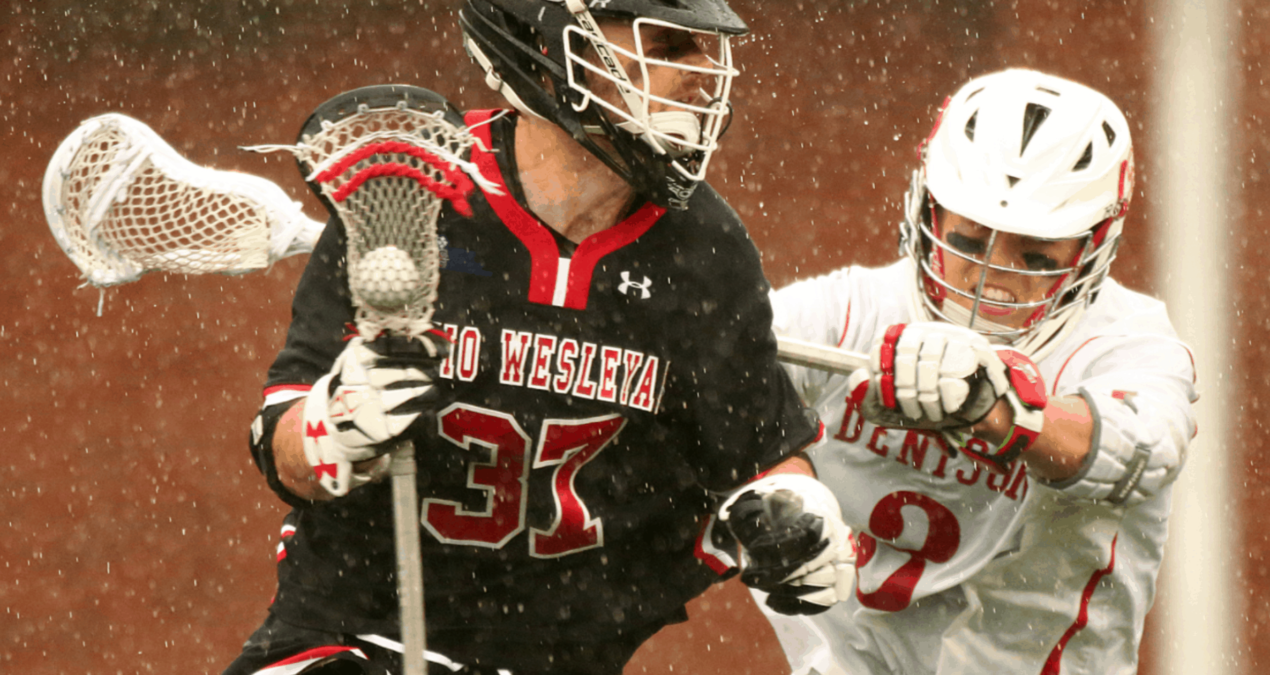 Things went much more according to plan this time around for the Big Red.

Entering this season, there was no reason to believe that it would be any different at year’s end than in past years: Denison and Ohio Wesleyan battling it out for the honor of NCAC Champion.

Since the creation of the NCAC Tournament in 2013, these two perennial powerhouses have squared off in the championship game every season. And while the Big Red held the edge in these championship matchups (3-2), they were the ones coming into the tournament with something to prove after falling short at home against the Bishops 13-8 just a few weeks prior.

Denison Head Coach, Mike Caravana, comments on the regular season loss, “We felt like we didn’t compete at the level we needed to. We ramped up competitive nature of practice and the guys responded well to that.”

Whatever Caravana and his staff did to bring more intensity into the team’s practices certainly had a positive impact on their performance down the stretch in the regular season and into the tournament. The Big Red made quick work of Kenyon in the NCAC Tournament Semifinals with a 14-3 win to earn a much anticipated rematch with the Bishops. This time, on the Bishops’ home turf.

Denison jumped on Ohio Wesleyan right from the opening whistle. The entire team played with an edge that wasn’t there the first time around a few weeks prior and they grabbed an early 4-1 1st quarter lead.

Caravana, proud of his team’s effort, remarks, “We kept the edge longer and were able to execute better.” He looks back to the regular season loss and adds, “[Ohio Wesleyan] came in with more edge in the regular season and played a great game.”

The Big Red would continue to build on their early success as the game wore on. After heading into half with an 8-4 lead, they didn’t give an inch in the 2nd half of play. Six more goals was more than enough to secure a hard-fought 14-7 victory.

In terms of strategy and adjustment, Caravana shares that they intended to “attack them from behind goal and create overall more possession time” in hopes of slowing down Ohio Wesleyan’s fast-paced offense.

Henry DeCamp ‘19, the Big Red’s faceoff specialist, dominated all game and won an impressive 18/25 faceoffs. While faceoffs are a huge part of establishing and controlling possession, Caravana points to his freshman goalie, Reeves McKenney when he talks about how the team got rolling early on.

“Reeves got us going early by getting some huge stops against their top scorer, Tennant,” he says. McKenney finished the game with saves on 9/16 shots (56.3 save percentage) on his way to securing NCAC Tournament MVP honors.

That’s not so bad for a goalie making his 5th career start. Caravana discusses the lineup adjustment at goalie: “We have been relatively inconsistent in goal and Reeves had been very good in practice. We felt like he deserved the chance and he was ready for the challenge.”

DeCamp ‘19 and McKenney ‘21 were far from the only members of the Big Red who turned it stand-out performances in the team’s biggest game of the season. Attackmen Spencer Butler ‘19 and Brooks Davy ‘19 combined for seven goals, while Peter Pittroff ‘20 added two goals of his own to go along with three assists. Other contributions for the Big Red came from midfielder, Jake Waxter ‘19 with two goals and Hannibal George ‘18, Owen Armstrong ‘19 and Henry DeCamp ‘19 with one goal apiece.

The Big Red victory locked in their fourth NCAC Championship title in six years, but it also clinched a bid into the Division III NCAA Tournament.

Looking ahead, Caravana stresses that consistency will be the biggest determinant of the team’s success in the upcoming tournament against the best of Division III. “We have to build upon this level of consistency in all facets of the game,” he says.

The entire bracket for the tournament will be released on May 6th during the Selection Show on NCAA.com at 9 p.m, and the Big Red will return to action in the first round of the tournament two days later on May 8th.

Putting away the poles: Why I left the Big Red track and field team