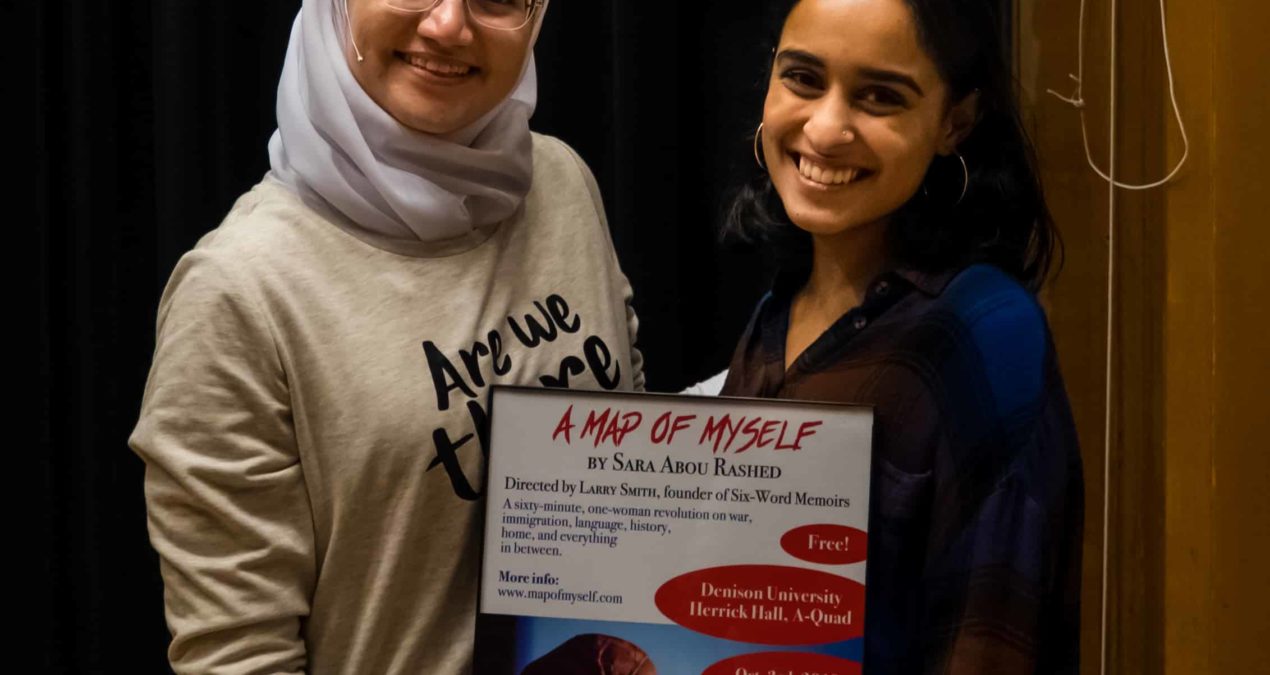 Figuring yourself out in college is hard enough, but when you are finding a new country to call home, it becomes much more challenging.

Born and raised in Syria, Sara Abou Rashed ‘21 is one of two people who wear hijabs at Denison. In 2013, her family moved to Columbus, Ohio to escape the Syrian War. When she moved to America, she did not know one word of English. On her first day at Centennial High School in Columbus, Rashed was given the Odyssey as her first reading assignment: a story about someone journeying back home.

This story in particular was influential to Rashed when she started to live in America, which she voices in her new one woman show, “A Map of Myself.”

“A Map of Myself” is Rashed’s first big attempt at bringing politics and art together, the two things she’s most passionate about by telling her personal story of immigration, but also paying tribute to other immigrants.

“It adds a human experience to the concept of immigrations which we only hear about in terms of legal issues and statistics,” said Rashed. “I’m interested in sharing my journey of finding home and having others witness and feel encouraged to do the same.”

Rashed, a major in international studies and minor in creative writing at Denison is a student whose passion is to write poetry and to spread activist thought through story. When she was a child, Rashed’s grandmother used to read poetry to her every night. Starting at the age of nine, she picked up the pen and hasn’t put it down since.

“Writing has given me purpose,” said Rashed. “At a young age, writing has shown me how much I love sharing my thoughts, feelings and words. I started reading my poems and soon enough grew to love being in front of people. I find it to be a powerful platform that can influence others. Now, my dream is to continue what I have started and share my words with more and more people.”

This past summer, Rashed wrote the script of “A Map of Myself” under the supervision and guidance of Larry Smith, the founder of “Six Word Memoirs,” a project founded by the online storytelling magazine Smith Magazine in Columbus, Ohio. Like Smith Magazine, “Six-Word Memoirs” wants to provide a platform for storytelling in all its forms. Smith is a journalist by training, but a storytelling coach through passion.

Smith is the director of Rashed’s one-woman show by assisting through script writing, brainstorming, logistics and venues.

“He loves to heart stories of others and put on shows where people can feel heard and appreciated,” said Rashed.

Recently, Rashed travelled to Athens, Greece through the Global Liberal Arts Alliance, an association of numerous colleges like Denison across the globe. From all these different countries, only 24 students could be chosen to attend the Athens Democracy Forum hosted by the New York Times as student delegates. They attended the Athens Democracy Forum, an international political event, where they met the former president of Mozambique, as well as the president of the Hellenic Republic (Greece and all its islands). They also met several ambassadors from Qatar, Kuwait, Canada, Uruguay, Norway, the UK and beyond.

Some of Rashed’s other accolades include giving a TEDx Talk, getting nominated for a Pushcart Prize at 16 and performing at the Tenement Museum of New York. She also has previously served as a Senator in DCGA and is currently an Ambassador for the office of Multicultural Student Affairs at Denison.

map of myself, one woman show, sara abou rashed
Share :