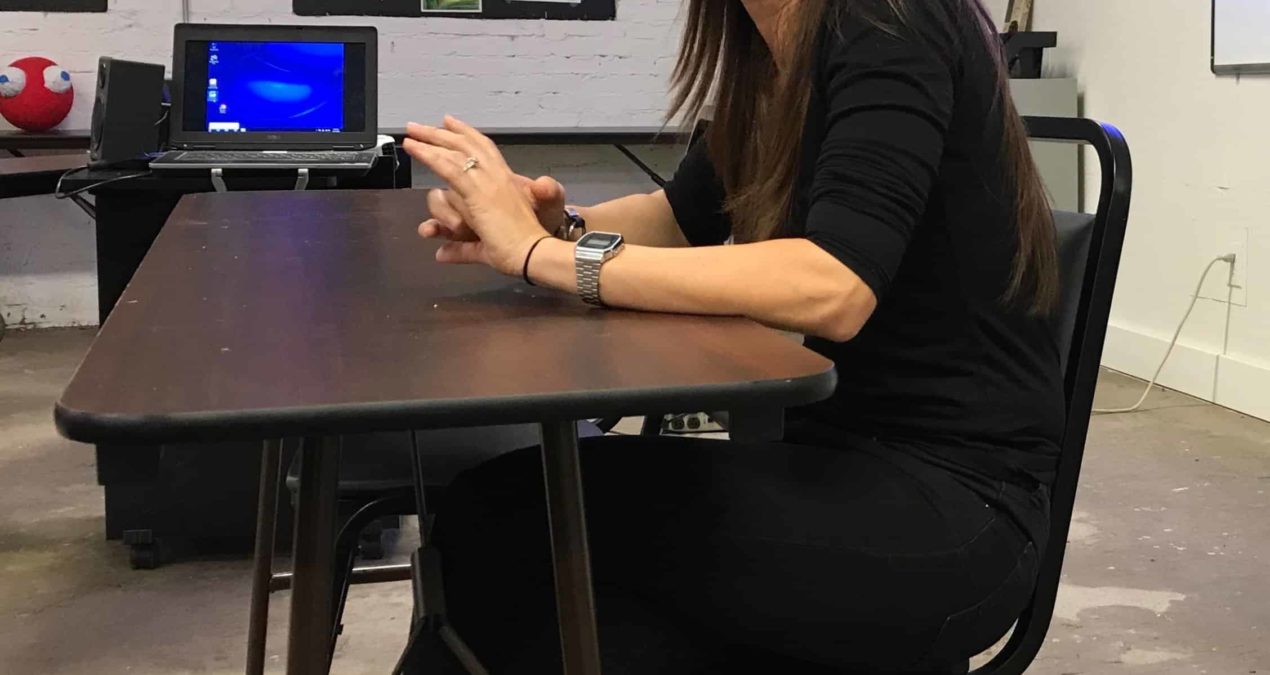 BY ALINA PANEK AND SHANTI BASU

As Elaine McMillion Sheldon sips her third cup of coffee in Herrick hall, she says “There’s no harm in documenting struggle as long as you’re listening more than talking- it’s often these images that lead to change.” As a documentarian and film-maker, this advice is integral to her approach in her own practice. Just 24 hours after taking the stage to accept News & Documentary Emmy Award for Outstanding Short Documentary for “Heroin(e)”, she was at Denison speaking to and taking questions from students about film-making, her home, Appalachia, the opioid epidemic, and her freshly-acclaimed film “Recovery Boys.”

One can see how she truly takes profiling a community and fragile individuals in a humane way very seriously in works such as “Hollow”, a 2013 interactive online documentary, to Heroin(e) and Recovery Boys which can be found on Netflix. Even though it has been many years since its release, Hollow draws comparison to work that Sheldon is recently released, from the topic down to the contemporary technical artistry. All of these titles have focused on profiles on the whole community and key individuals promoting cultivating the growth of West Virginia.

“Recovery Boys” begins with young user is brought to a new recovery center. The center is also a farm in rural West Virginia where he’ll spend the next six months. Over the next few scenes, several other men in recovery join him, and together they engage in physical activity, therapy sessions, and

“We wanted the film to start exactly where we met them,” she explained, of not showing the men’s mugshots or criminal records. Often, social impact films forgo an individual’s story in favor of the shock factor. But this was not enough for Sheldon who felt “this can’t be the whole truth, all needles and scars, there’s gotta be more out there.”

Too frequently, especially with the burgeoning opioid epidemic, writers and documentarians fall into what has been dubbed ‘parachute journalism’- they fly in, try to capture the angle they’ve decided on for a story, and disappear. Worse yet, many stories take on a ‘savior complex,’ in which they prescribe pre-ordained solutions to a problem they’ve rarely gotten close enough to absolve. For many communities in the appalachia area, this has prompted a distrust in the media.

Sheldon is a woman with unassuming success, humbly inspired by her home state. “I wanted to be a storyteller since I was a kid,” she said.  “I was a spy and I would record conversations — my mom got me an audio recorder.”

She was inspired to tell the story of her home because Sheldon often only heard the negative stories about her state. In one of the classes that she sat in — she attended both English, Psychology classes, etc — she showed an Australian news segment that called West Virginia “the most tragic state” and had a montage of trailer parks, trash and people who are homeless.

Sheldon also recounts in West Virginia that other documentarians are only interested in saving West Virginia. “They have a savior complex,” she said. Her peers often only document the tragedies of addiction and how the communities have been ravaged.

“I moved back because this was a half truth — it really pissed me off,” she said. “ Her frustration with the coverage and with state politicians were her motivation to show the world not only the flaws but the positives she sees in West Virginia. Sheldon said that she only strives to portray the truth that she sees which is why she often refers to herself as a documentarian rather than a filmmaker.

All of her accredited titles have been located in West Virginia and she stays there with her husband to be close to the communities that she documents. Though media hubs like New York and L.A. often attract aspiring artists, Sheldon said, “it’s huge benefit and privilege to work somewhere you can afford to live.”

My family had get your hands dirty jobs — doctors and nurses.

Sheldon has earned an undergraduate degree in Journalism at West Virginia University but felt a draw towards visual storytelling. She “fell in love with watching things happen on screen.”

Sheldon is not only recognized for her technique but the artistry that goes into her documentaries. She achieves her seemingly slow-motion, up-close profiles through patience and skilled technique — she received an MFA in Visual & Media Art at Emerson College. There are rarely any formal interviews in the traditional behind the desk setting.

Sheldon said that she wanted the documentaries to be constantly moving with the scene to keep up with the energy as a short documentary. To add to this effect, there is limited voiceover and to convey information between two individuals Sheldon tries to capture it through organic conversation between the two.

Sheldon is also very patient and often spends many weeks with her profiled individuals — sometimes just listening for days. “It’s enough to make you crazy” she said.

With this footage, she is able to create a observational scene of the location and event, a montage with minimal cutting. When she finally comes across viable footage she often films with lots of reflexibility. “I often am just winging it and capturing as it’s happening,” she said.