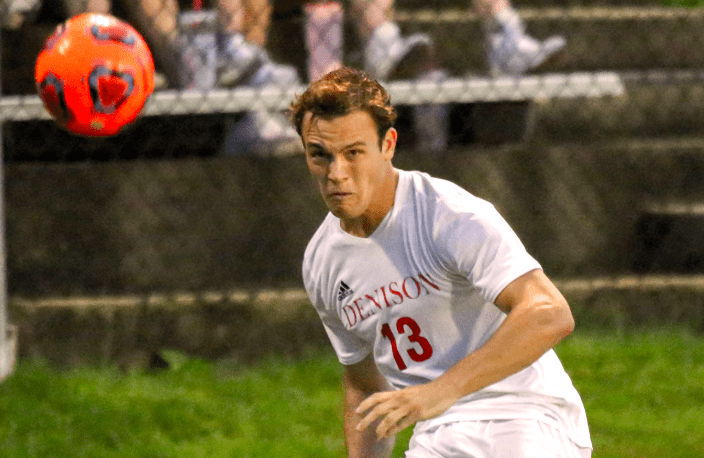 The Big Red may not have won, but they certainly battled on both ends of the field to ensure they didn’t lose either.

In a 0-0 tie against Allegheny this past Saturday, Men’s soccer took the game into double overtime in an attempt to swing the outcome in their favor.

This cold afternoon was a tough one, but this team never gives up. They were strong the whole game and they defended like their lives depended on it for a full 110 minutes before the game ended with goose eggs on the scoreboard.

Players like Brandon Kozak ‘19 and David Jaben 19’ were trying all game to get the ball in the net, passing, head-butting, and made together 6 shots on goal. Dylan Brown ‘21, Denison’s goalie, defended his net, never giving up, saving the ball 5 times through the game. Brown ‘21 shares some of the frustration that he and his fellow teammates felt following a grueling 0-0 tie.

“It’s very hard to stay focused and locked in for a whole 110 minute match. We obviously aren’t the most satisfied that we couldn’t come out with three points, but with 24 shots in the game, we’re realizing that if we keep creating chances. We’ll have better opportunities to put a few in the back of the net,” Brown ‘21 says.

For the first half the team’s strength was their defense. The second half, on the other hand, was nail biting. The ball consistently flew toward the net, with Brown quick on his feet to block it.

Anyone could see the passion that was coming through their faces. Even with two minutes left of regulation and they would still not back down– Brown saving one goal after the next.

As the ten second countdown began, both teams mentally prepared for a long day. With the score still knotted at 0-0, then the first overtime begun.

According to NCAA rules, there are no regular two-half extra time periods in soccer. Instead, golden goal is applied. If neither team scores in the two ten-minute periods, the match ends in a draw, unless it is a playoff match, then it would go to a penalty shootout.

Denison Men’s soccer was hoping to close out this game and turn around their beginning season slump. Unfortunately, neither the Big Red, or the Gators, got the ball in the net. The second and last overtime was the most energetic, nerve racking and intense of the game.

Brown offers some insight into what the team will look to turn around as they try move into some tougher NCAC competition this week and going forward.

“We are trying to focus on our attacking mentality more as the season progresses. We have a young attacking core that we know can be dangerous in the attacking third. We just need to get a few goals under our belts and then things will start flowing our way,” Brown said.

The Big Red are back in action twice this week, first on Wednesday, September 26 at home against Thomas More at 7 p.m. Then, they will be back home in front of Denison friends and family for Big Red Weekend on Saturday, September 29 at 12 p.m. for a rivalry game against a tough Kenyon team.