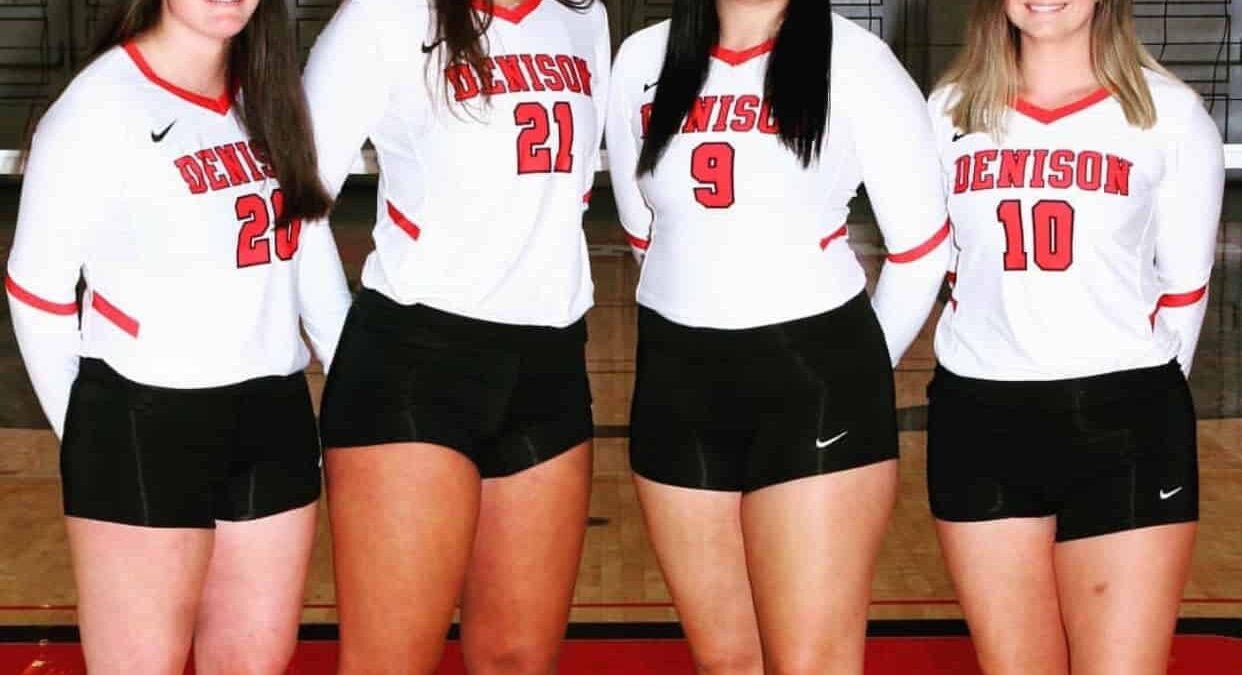 On Senior Night for Women’s Volleyball, the Big Red faced Wooster as they competed for the 6th seed in tournament play this past Wednesday night.

After a brief pre-game ceremony honoring Denison’s four seniors, Ellie Blue, Mary Massarelli, Julia Miller, and Isabella Pivec, the Big Red started off strong in the first set with aggressive play from both hitters and defensive specialists. Middle hitter Alex Tubbs ‘20 had six kills of her own, while outside hitter Emma Woerner ‘21 managed to get three, setting the pace for the rest of the game for the Big Red offense. Denison clinched the set in a 25-13 victory.

With their spirits high after a successful first set, the Big Red didn’t back down as they continued play into the second set. After a few errors committed on the Big Red side, the ladies pulled themselves together offensively midway through. Emma Woerner had five kills while right side hitter Payton McElfresh ‘22 had four, igniting brilliant offensive play throughout the rest of the set. With the Fighting Scots committing several errors toward the end of the set, the Big Red found their stride with a successful 25-17 win.

Going into the third set, the Big Red continued with their smart, energetic play. Woerner had five kills, along with two kills each by Tubbs and McElfresh. The set ended in a 25-13 victory for the Big Red.

With great defensive play from libero Marija Pavlick ‘22 and other defensive specialists in the back row, the Big Red truly found their groove and played effectively together.

Senior Night is a valuable opportunity to acknowledge the hard work and major effort that the four seniors on this team have contributed. Each senior took the time to reflect on the season and look ahead toward what’s to come.

Isabella Pivec is a right side hitter from Baltimore, Maryland who has compiled 535 kills, 154 digs and 153 blocks. She is an economics major with a minor in mathematics.

“It was an amazing time and the energy from on and off the court made the night really special. I am excited for tournament this next weekend and hopefully we can bring the same excitement and energy, and hopefully see a weekend full of victory,” said Pivec.

Mary Massarelli is a right side hitter from Bexley, Ohio who is majoring in psychology.

“I’m really proud of the way every played on senior day. You could tell that everyone was going out there and giving it all that they could on both offense and defense. It was a really important match for us because that win determined where we would be placed in the tournament. I couldn’t have asked for a better result. We definitely played our best volleyball and I hope it continues like that for us heading into the conference tournament,” said Massarelli.

Defensive specialist Ellie Blue is an education major with a minor in psychology from Carlisle, MA.

“I think our game against Wooster on senior night was some of the best volleyball we’ve played this season. Everything was kind of clicking together and both offense and defense were really aggressive which helped keep Wooster out of the system. Our energy was so high so it was a really great win and team effort going into the conference tournament,” said Blue.

Setter for the Big Red Julia Miller is from Battle Creek, Michigan and is a global commerce and communication double major. Julia has collected 1921 assists, 70 service aces and 50 kills.

“We stepped on the court ready to compete and have fun. All aspects of our game were clicking and we couldn’t have asked for a better way to play our last game in Livingston. I can’t say enough about Mary, Ellie and Bella. It’s been an unbelievable four years with them and senior night was so special for us thanks to our team,” said Miller.

After another 3-0 victory against Capital this past Saturday, regular season play has come to an end as the Big Red’s next match is in the NCAC Tournament at Wittenberg this Friday.