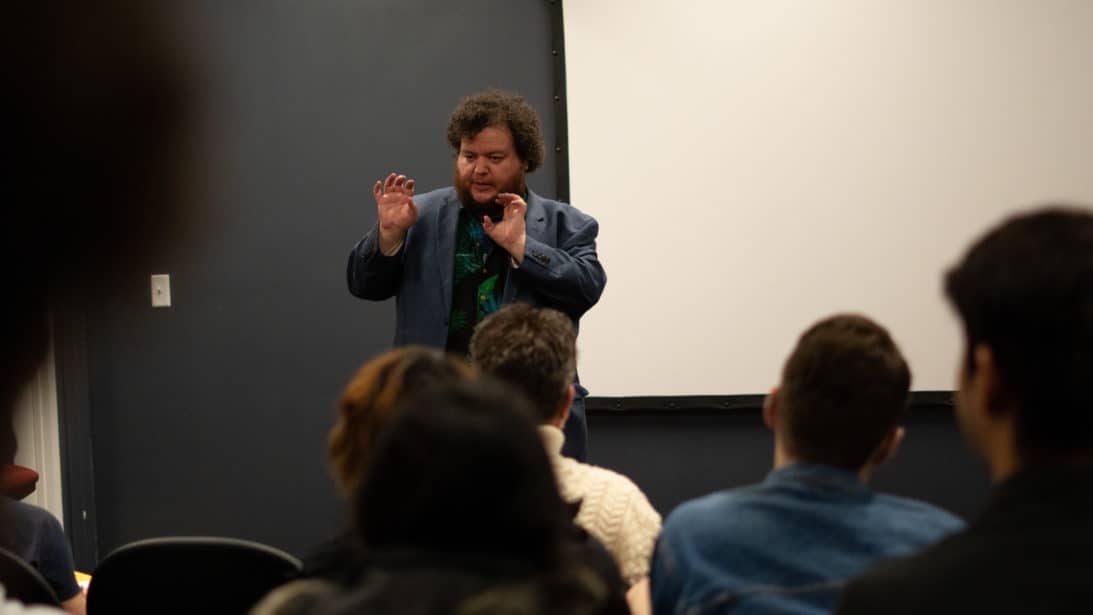 DEVIN MEENAN — Sometimes, we’re lucky enough to have artists stop by campus with the fruits of their labor in hand.

Last week had one of those occasions, Stephen Broomer, a Toronto-based Filmmaker and Film Historian/Preservationist, as well as the author of Hamilton Babylon: A History of the McMaster Film Board and Codes for North: The Foundations of The Canadian Avant-Garde Film, visited Denison on Thursday, February 7 to host a screening of some of his films. Hosted by the Department of Cinema, 12 of Broomer’s short films were screened at the event, most of them shot and projected on 16mm film, followed by a brief Q&A session.

Broomer’s films, avant-garde in nature and many of them reworked versions of footage shot in his days as a student, exemplify a beauty that is both enchanting and confounding. When the first film, Queen’s Quay, appeared on the screen, I was instantly drawn in by the streams of different colors colliding together into a beautiful, layered barrage. Crafted from old Super 8 films via optical printers (devices used to create special effects on film reels), the films feature multiple layers of imagery placed on top of one another. Occasionally music will accompany the video (music is used to haunting effect in Spirits In Season), but more often than not Broomer lets the photography speak for itself. This absence of narrative meant that despite often finding myself captivated, I couldn’t quite tell what was happening onscreen or grasp the meaning behind it. Though, as Broomer himself put it, “I don’t care about casting a message, I care about casting an experience.”

After the screening concluded, several attendees posed questions to Broomer; I for one got the chance to briefly talk with him and discuss some of his film-related endeavors in a personal manner. Tracing his interest in experimental filmmaking to having seen avant-garde work such as Un Chien Angelou and the works of Maya Deren at a young age, Broomer also discussed his work in preserving films: “There is a lot of work that is just on the cusp of disappearing” he explained. “And so I’ll, as a preservationist, intervene and create new copies of films,” added Broomer.

Considering that every film has its own unique quality that’s a tragedy to lose to the void of history, the work of film preservationists like Broomer is much appreciated.

Finally, we discussed his experience in going back and remaking his old student films into the films that had just screened. “It was a way to rediscover a part of myself that had disappeared in a sense, and to rediscover joy,” remarked Broomer.

Hopefully, we’ll all be able to experience such emotions when we look back at our time as students a decade from now.