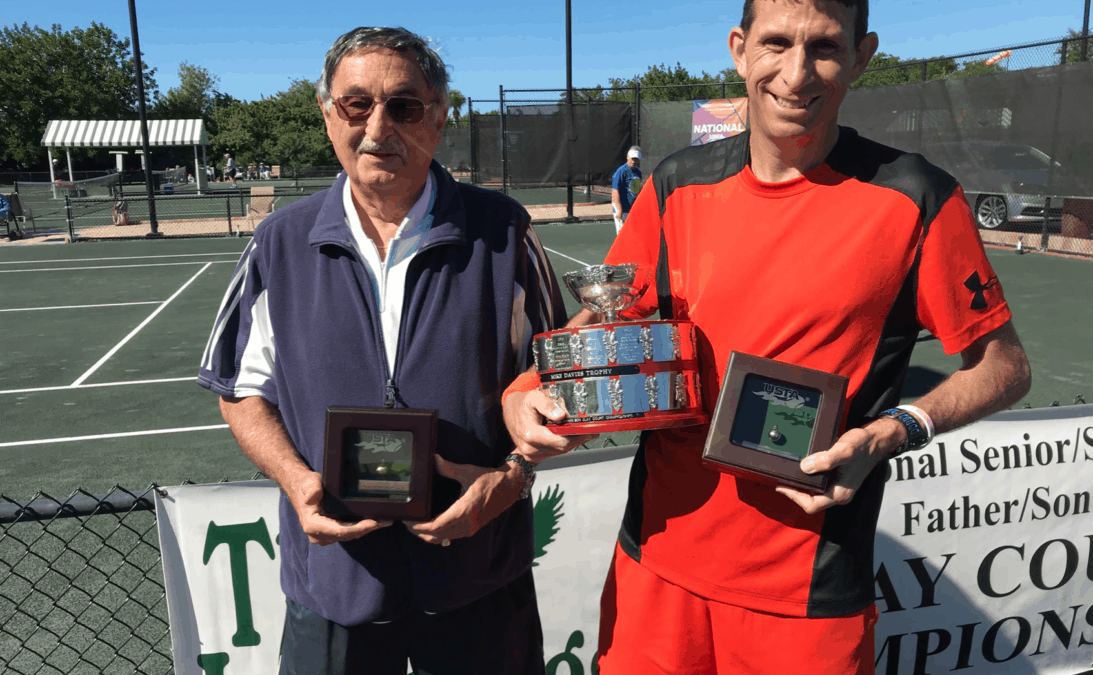 How many people can say they have captured three consecutive national level tennis tournaments in a single calendar year? What about doing so at 80 years-old?

Anyone who plays tennis knows how unique of a sport it is. It’s apart of an incredibly small list of sports that you can play competitively for your entire life, and Denison’s very own Peter Homorody is the perfect ambassador of this.

Peter has served as an assistant coach for the Denison men’s and women’s tennis programs since 2003. Aside from his remarkable coaching achievements with both programs over the years, Peter has amassed quite the list of personal accomplishments competing in national level doubles tournaments with his son, Jason.

Coming from a family full of tennis enthusiasts, Jason describes how he initially got involved in the sport back when he was just four years-old.

“As a child, I remember going to the tennis club and seeing my parents play. I got tired of watching and kept asking them to play. So finally my dad sawed off the end of a wooden racket so that I could play (there were no kids rackets at the time). So began our relationship with tennis together,” says Jason.

The duo first entered father-son national competition back in 1998 and won their first tournament together four years later in 2002. During those years, the two competed in the Senior Division where the father on each team must be 60+ years-old.

After moving up to the Super Senior Division in 2008 (the father on each team is 70+ years-old), Peter and Jason captured the year’s first three national tournaments as a team. Although they were unable to finish off the “golden slam” and capture the fourth and final tournament (Jason’s daughters had a dance recital so they did not compete) the father-son duo had risen to the top. They were the best of the best.

Fast forward four years and Peter and Jason were still competing with top-tier competition to win national tournaments. After losing in the finals in the Clay Court National Championships to a team that featured a son who spent time playing on the pro tour, Peter and Jason’s days competing together started winding down.

Jason talks about a goal the two of them had following 2012: “I started focusing on running marathons and we fell out of playing any tournaments together. But we always had the goal to try and win all the national tournaments in one year when he turned 80 years old in 2018. I wasn’t ever really sure if that is something we would actually do when the time came though.”

Fast forward another six years to this year, 2018.

Peter and Jason set out in June to chase after their crazy dream of winning all three national tournaments (the Super Senior Division only has three, while the other divisions have four) together in one season.

The two agreed that they would only continue onto the preceding tournament if they won the current tournament. It was win-or-take-all this summer for Peter and Jason, the father-son duo who had been playing together since Jason was four years-old.

It had been six whole years, however, since they had competed together in 2012. After a three-set quarterfinal comeback win in the National Hard Court Championships, Peter and Jason fended off multiple set points to ultimately triumph in the finals and capture the first of the year’s three national tournaments.

Less than two months later, the two moved onto the National Grass Court Championships in Long Island, NY. They ran into a familiar opponent in the finals — the same team that took them to three sets in the previous tournament — and won once again. This time in straight sets.

Two down, one to go.

The third and final tournament came this month in Sarasota, FL. The Clay Court National Championships was the only tournament standing between Peter and Jason and their “golden slam”, the goal they set out to achieve six years prior in 2012.

Once again, they rolled through their competition and, once again, squared off against the same team they had knocked out in each of the previous two tournaments.

Words simply cannot describe how impressive Peter and Jason’s dominance over the years has been. To compete at such a high level at 80 years-old is truly heroic.

“We do it for the fun of playing together and getting to go on vacations and have adventures together. In California, we went to a Warner Brothers Studio tour and Joshua Tree National Park (it was 100 degrees and it was the day after our tournament and my dad still hiked over 5 hours that day!). In New York we got to go see the US Open. And in Florida we got to relax on the beach. Very few times in life do we get to go on a trip with our parents let alone have an experience like this, a chance to be national champions together. It is something I will never forget,” says Jason.