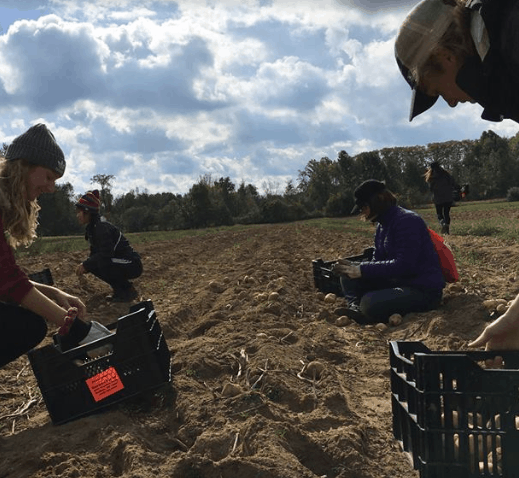 Bon Appetit goes local in order to find their wings

MAREN CLARK — Denison Dining is big on low-impact, local and organic food. But what does that mean and what actually goes into making that vision a reality for campus?

I spent fall break camping at New Creations Farm (they raise cattle and pigs for Denison) in Chardon, OH, with Piper Fernwey, Bon Appetit’s director of sustainability for Ohio. I got to experience the network of food supply and processing firsthand. I talked with Fernwey over three days around campfires, in livestock pastures, potato fields and a 189-year-old barn.

A few years ago, Denison made a goal to significantly increase the amount of local food served in dining halls. Chicken was a major component of this transition.

Fernwey explained how companies like Tyson form distant partnerships with farmers to raise their chickens. They “drop off the chickens, drop off the feed and say ‘see you in 60 days!’”

The farmers are paid based on how many chickens they keep alive. These farmers buy the houses and do the labor so the contractor can stop using them whenever, leaving them with chicken houses that haven’t been paid off and no way to get more birds or feed.

This keeps local operations so small that it was difficult to find anyone with more than 20 chickens. No one could support a big chicken house without security of customers and feed without a big contractor like Tyson.

Instead Fernwey found seven farmers who had been cut off by a contractor and were no longer using their chicken houses but wanted to. They all signed to her with the promise that Fernwey “wasn’t going to back out [on them] like everyone else had before.”

Next, the chicken needs to be processed locally, too. Fernwey discovered a tiny Amish processor so small it was only open half the year when she found it. Through working with Denison, they were finally able to employ people full time.

Fernwey says she “had been to a lot of slaughterhouses and [that] was the first time I saw two things: white people and smiling.”

Many slaughterhouses are staffed by undocumented immigrants who are often exploited by their employers.

There is also a high rate of mental illness, violence and drug abuse among slaughterhouse employees because it’s such a morbid job.

“To have a work environment where people were smiling and singing… was kind of amazing,” Fernwey says.

However, another problem arose. While Denison was consuming a thousand breasts a week, they barely ate any legs and drums. Fernwey worked with students and chefs to broaden the uses of chicken in the dining halls. Efforts included educating students on the variety of sources of lean protein and training chefs to cook tasty food with other parts of the chicken.

Some things worked better than others. Most students would eat wings but drums were a harder sell.

To accommodate this, meat from the more ‘barbaric’ cuts was used to make chicken sausage and wings were served tipped and split. The ‘hand’ at the end of the wing is removed (tipping) and the wing is halved at the elbow. This is only normal arbitrarily. She finds it “really weird” that people will only eat it this way.

I was conscious of how I spoke about food since Fernwey identifies as vegan. One dinner on the trip someone accidentally put the spoon for vegan chili in the meat chili, and Fernwey just poured herself chili straight from the pot. As Bon appetit’s director of sustainability in Ohio, she is familiar with the overbearing role of meat in American diets and the role of the food industry in society and the environment, yet she helps hundreds of people eat meat. She is helping clients achieve sustainable eating no matter what they choose to eat. Fernwey understands that people have different perspectives and concepts of food. She works to marry safe, sustainable values with the demands of brand loyal, meat-hungry campuses and companies for the future.