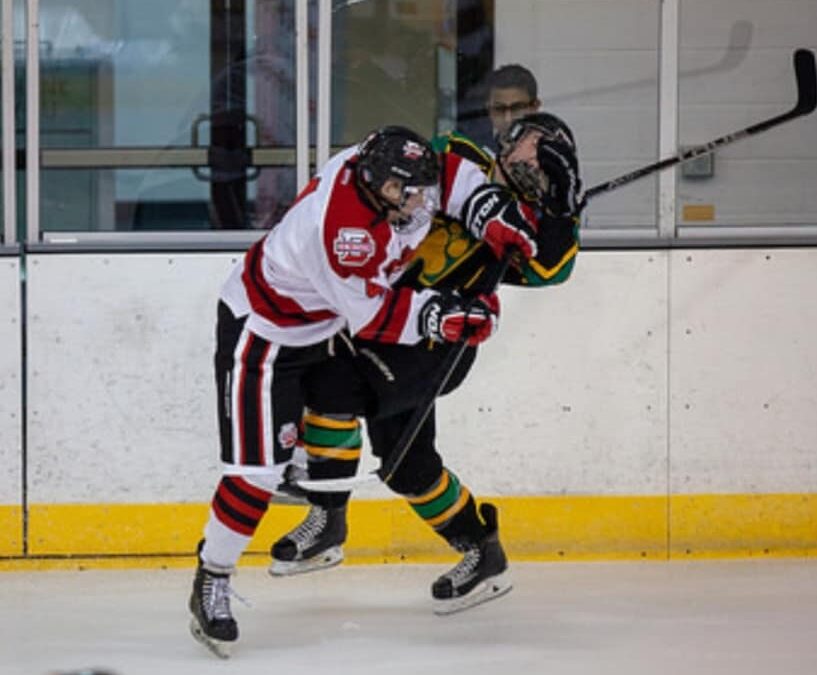 The difference between winning and losing lies upon discipline.

The Denison hockey team proved this to be true this weekend in their back-to-back matchups against St. Vincent College from Latrobe, Pennsylvania.

The team has had an incredibly successful year, skating out at a blistering hot 10-0-1 record. Back-to-back losses came against Miami of Ohio to put the men at 12-2-1. However, the losses were a minor setback as the men rallied behind a strong game plan and scored two more victories this past weekend.

The team’s head coach Jeffrey German has made radical changes to the offensive and defensive schemes. It took them from a .500 team to well on their way to a conference championship bid.

Coach German however, praises the team for the success this year. “The team has had a winning personality since our very first come from behind win in our very first win. We hate losing and play with passion. Couple that with some remarkably talented players and that’s a recipe for success. It makes my job easy,” he said.

However, the matchup against St. Vincent was anything but easy. The Bearcats were a large and physical team. After the Big Red would score, moments later St. Vincent would tie it up. In each game there was roughly 15 penalties combined between the two teams, and emotions ran high.

However, the Big Red stayed disciplined and did not let the emotional physicality of the Bearcats throw them off their game. Big Red Defender A.J. Koch ‘19 speaks to the resilience the men had that allowed them secure the victory.

“St. Vincent is a bigger, slower team. They couldn’t keep up with our speed so they focused on playing a hard and physical game. Things got a bit chippy, so we ended up having to grind it out and play a more physical style as well.”

Captain and starting center Ben Cousineau ‘19 spoke to the game plan that led the Big Red to victory. “What worked for us against Miami [of Ohio] was getting pucks to the net and pressuring their defense hard on the forecheck. We wanted to continue to improve that against St. Vincent.”

Improve they did, as they topped St. Vincent 6-4 on Friday and 5-4 on Saturday. Two much improved results from their games against Miami of Ohio.

The coolest moment of the weekend game from the goalie Thomas. He was able to acquire an assist on the play and get a tally on the scoresheet, something rare for goalies. “Getting points as a goalie is always fun. It’s always fun to get your name on the scoresheet,” he said.

Big Red hockey is not planning on slowing down anytime soon. They focused on what went wrong in the Miami of Ohio game and made the proper adjustments for this week. “We played well against Miami. Especially in the second game. Both games we were tied or a goal down going into the second [period]. We had 45 shots on goal in each of the games. Their goaltending was exceptional. Miami is a great team but we played them well,” coach German said.

Up next for the Big Red will be senior night. They’ll take on Case Western Reserve for the final series of games leading up to the playoffs. The game will take place at home in the Lou and Gibb Reese Ice Arena on Friday, March 2.