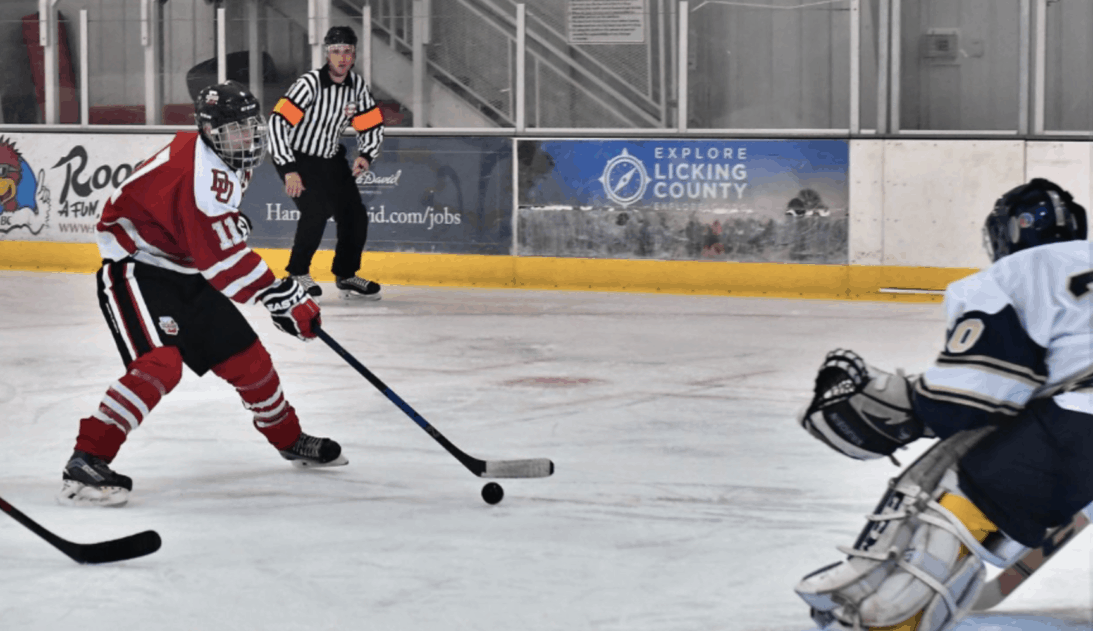 For the Big Red hockey team, a pair of home weekend victories over the Akron University Zips brought their current winning streak to six games to improve their overall record to 11-0-1 (5-0-1 College Hockey East).

The first of their two games against the Zips took place on Friday night at Denison’s home rink, Lou & Gib Reese Ice Arena, where the Big Red are unbeaten on the season.

There was never a dull moment on Friday when the Big Red offensive attack was clicking all night long. Before the final buzzer, the team netted ten goals en route to a comfortable 10-4 victory.

The fast-paced nature of the game definitely played to the advantage of the Big Red who lead the American Club Hockey Association (ACHA) with an astounding 7.71 goals per game. Perhaps even more impressively, the Big Red average 56.86 shots per game, nearly 20 shots over the ACHA division average of 37.08.

Steven Verstandig ‘20 earned a hat trick with three goals to bring his season total to 11, tied for the most on the team with Andrew Marino ‘19, who also found the back of the net Friday.

Other contributors included forward Michael Goldman ‘22 who scored his third goal of the season. Defenseman Joe Rapp ‘22, also got in on the scoring action for the first time this season to help the cause for the Big Red.

Captain and defender Ben Cousineau ‘19 had three assists on Friday night to double his total on the season. Cousineau comments on how the team’s early success has compared to their vision prior to the season.

“Everyone on our team had high expectations coming into the season but so far I think we’ve outperformed those expectations. It will be interesting to see how we do next semester because we have some tough matchups against teams like Miami, Bowling Green and Central Michigan,” said Cousineau.

The Big Red were tested much more in the second of their two-game set with Akron. Contrary to the first time the two teams squared contest, goals came at a premium on Saturday night.

This time, however, the Zips were able to cut down the lead before it got out of hand and scored two goals — one in the first period and one in the second — to even things up heading into the third period.

Despite being outshot and out possessed all game long, the Zips had found a way to give themselves a chance with twenty minutes to go. A major reason for the lack of goal scoring on both ends was the stellar goaltending from both sides.

Big Red goalie Gavin Thomas ‘20 made a couple of incredible saves down the stretch to keep his team in the game, including an opportunity from a three-on-one breakaway.

Thomas’ heroics, along with the rest of the Big Red defensive unit’s solid play paved the way for the offense to regain the lead in the final minutes.

Cousineau was the one who came up big this time for the Big Red with a slap shot from just inside the blue line with under two minutes left to give his team a 3-2 edge. The Big Red were then able to hold on for the win in what was their final game of the semester.

The captain was humble as always when asked about his game-winning goal and deflected the attention away from himself.

“It was obviously a great feeling to get the game-winner especially during my last season at Denison. But I was more excited for our team to be able to continue our winning streak heading into next semester,” said Cousineau.

The Big Red will look to continue their winning ways after returning from winter break, when they will hit the road to play against Case Western Reserve University on Friday, January 25th at 9:10 p.m.