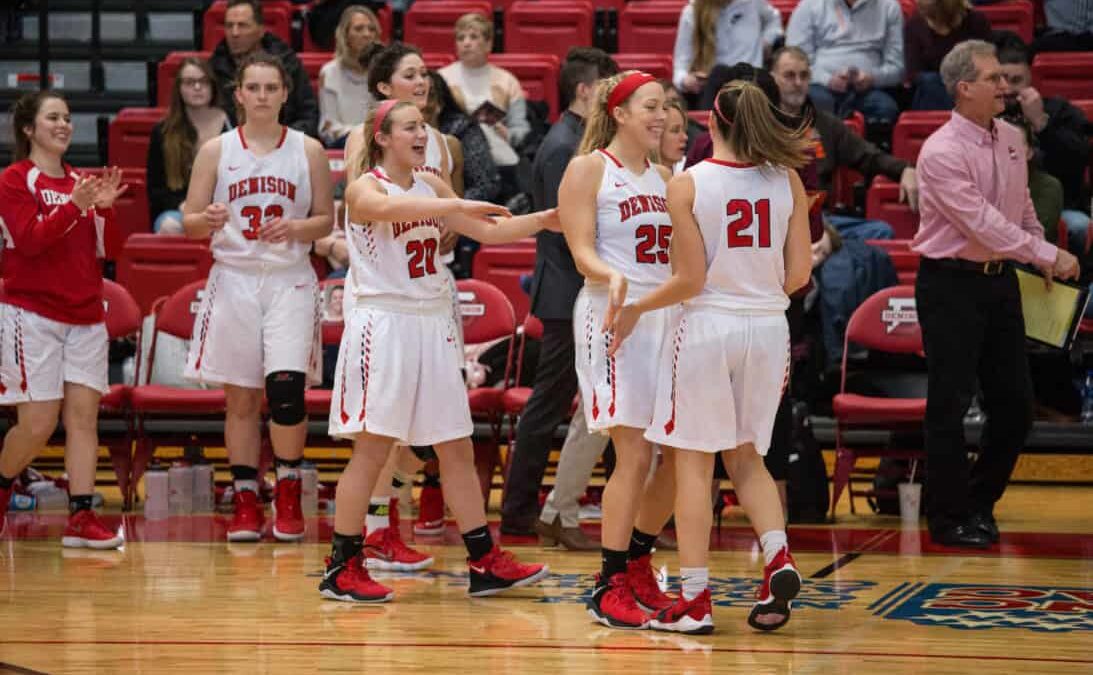 It’s not about how you start, but how you finish.

After trailing by four at halftime on senior day, Denison women’s basketball starting playing the way they expect to in the second half, outscoring the Allegheny College Gators by 15 in the half to lead to a 65-53 win.

The victory was the team’s seventh in a row. They were paced by Zyah Beal ‘21’s 17 points. Valesha Province ‘19 added 16 of her own on a fun senior day for her.

Province has gained minutes in each of her year’s at Denison, and is having a career year. Through extra hours in the gym, she has become a huge part of this year’s success.

“I’ve just continued to put in extra time year after year. Hard work breeds confidence, so the more work I put in, the more confident I feel to score, and the easier it is to put the ball in the basket. I’ve also just learned more about the game, and playing with mostly the same women the past few years, we’ve really learned how to play with one another and get the best out of each other.

Classmate Lucy Bancone ‘19 added four points and four assists, in addition to lockdown defense throughout the contest. Sarah Youngs ‘19 also got into the scoring column on a beautiful step-back jumper in the game’s final minutes.

It’s not too often that all of the seniors score on senior day, but all three did for this team. It speaks to the impact this group has had on Denison Women’s basketball as they head toward a potential NCAA Tournament berth.

Province spoke to what Denison Women’s basketball has meant to her.

“The basketball team has been a great group of friends that were there for anything I needed since I arrived on campus,” Province said. “I am a first-generation college student, so navigating college was a very new thing for me. My coaches, as well as teammates have been a great resource for advice and help along the way.  Our team is a group of very diverse group of women, so I’ve gained a lot of insight on where different people come from, as well as finding common interests with everyone. Having a group of people count on me, I’ve been held to a higher standard, developed a lot of leadership skills, and learned how to connect with different people.”

Youngs echoed those thoughts, adding about the relationships she has gained through Denison women’s basketball.

“Over the past four years, this team has provided me with opportunities to not only excel in basketball, but also form life-long relationships. Both the connections and relationships I’ve made with my teammates have single handedly made my last four years here worth it,” Youngs said.

Bancone spoke to how much fun senior day was for the group. Classic to this team’s mindset, the win came first.

“Senior day was a success. DUWB stepped it up after halftime and played team basketball, leading to a great win against the gators. It was special to have friends and family, traveling from all over, to see an awesome win,” Bancone said.

Youngs also discussed the great student presence during the win.

“I think we played hard as a team and it is always nice to get a win as we come to the end of our season, especially on senior day. I so much appreciated having such a student fan section… the support from the crowd brought so much energy to the game and made my senior day even more special,” Youngs said.

The win was a great opportunity to honor three seniors who have made a tremendous impact on the program over the last four years.

The team is currently ranked second in the NCAC with an 11-3 conference record with two games to play, including a huge road matchup against the team they are chasing: #20 Depauw. That game will take place on Wednesday, February 13. You can catch the game on https://portal.stretchinternet.com/depauw/. Tune in to see if the Denison women can pull the upset.