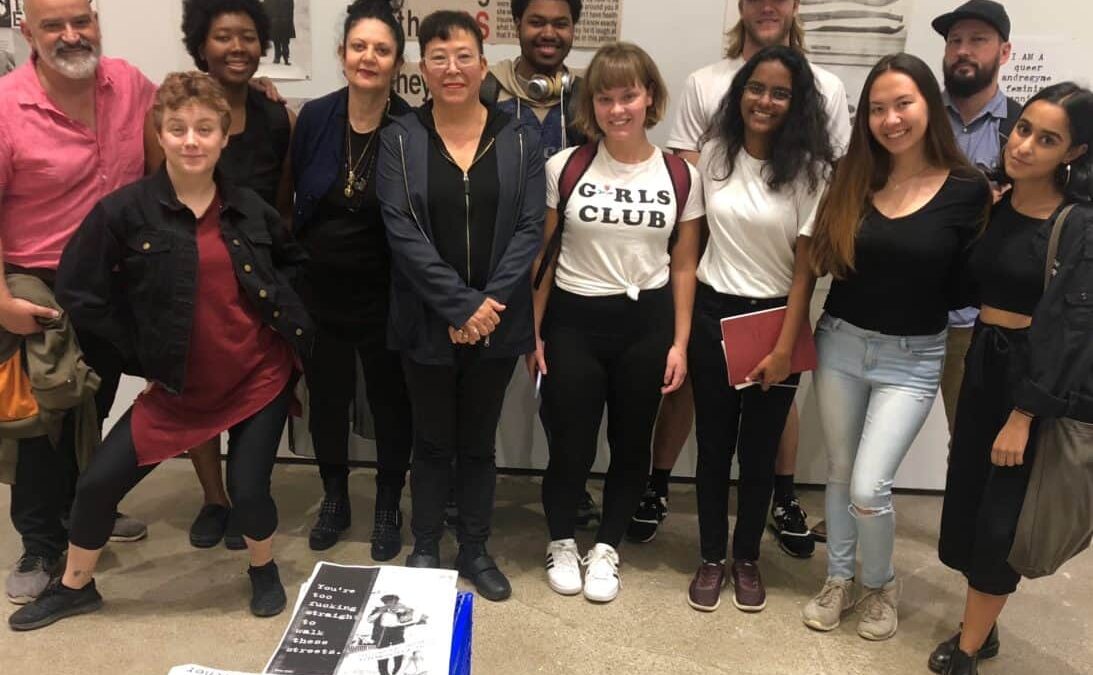 Get ready to withstand the task of the amplifier.

Denison students traveled to Columbus to witness arms ache avid aeon: A symposium Denison programs and departments co-sponsored in collaboration with the queer art collective fierce pussy on Saturday, March 2 at Beeler Gallery of the Columbus College of Art & Design (CCAD). The display was held through October 2018 – March 2019, ending shortly after the symposium.

A lesbian feminist art activist collective founded in 1991, fierce pussy started in New York City. The group is known for its history in AIDS activism during a decade of increasing political mobilization around gay rights.

Fierce pussy is a collection of artwork that can be posted on the streets, bringing lesbian identity and the amplification of activist thought and artistry to the streets, starting a conversation with viewers.

These posters can be downloaded on their website at https://fiercepussy.org/posters by anyone. Fierce pussy’s objective? To encourage people into action against adversity by exposing their art to anyone and everyone.

Low-tech and low-budget, the collective responded to the urgency of past years using readily available resources such as old typewriters, found photographs, their own baby pictures, printing supplies and equipment accessible in their day jobs.

Denison students from the studio art and printmaking course “Queer Graphix” and the art and journalism seminar“The Stove & Glass Collective” were invited to come to the show and symposium during the fall semester and recently on March 2 to experience the show and how art can implement change in society.

“Being part of The Stove and Glass Collective (an art and journalism seminar) last semester and Queer Graphix (an art activism class) this semester, it was inspiring to see and hear Fierce Pussy collectively channel their anger and pour their strength into their artistic practices and activism pieces, using humor and rage to reclaim homophobic slurs and queer public spaces,” said Shruti Shankar, a studio art major with a minor in cinema from Chennai, India.

In organizing this collaborative opportunity with Beeler Gallery curator Jo-ey Tang, Ron Abram, associate professor and chair of Denison’s studio art program comments: “With fierce pussy visiting Denison in the fall and our  students traveling on multiple occasions to see their show (as well as attend a concert by trans-cabaret singer Mx Justin Vivian Bond in November), I saw the impact all of it would have on students own relationship to artmaking and its  power to affect change. In response to our own political climate, fierce pussy’s influence can be seen in the spirit of collaborative agency students are increasingly demonstrating through political and art activist projects on our campus. This speaks to stronger Queer visibility on campus as well. All of which is consistent with Denison’s mission statement of ‘inspiring and educating our students to become autonomous thinkers, discerning moral agents and active citizens of a democratic society.’”

Throughout the exhibit was activist artwork that expressed the fluidity of sexuality, gender, the role history plays in telling stories, but more particularly, it discussed the role of a lesbian in society.

After an exhibit viewing, the gallery viewers were invited to sit in for a symposium, with speakers Thomas Lax, Elisabeth Lebovici, who are all contributing artists to the exhibit in some way, with opening speaker and moderator Jill Casid.

“I have their posters hung in my room and on my bedroom door – to have a legacy of radical queer lesbian feminist art activism to draw upon as a radical queer activist feels like a privilege … fierce pussy is a shining light, an example for all other collective activists and political work because of the relationships between the four core members; they create work alone and together, converse about both their individual work together and converse with people outside of the collective as well,” says Carissa Falcone ‘19, a women’s and gender studies major with a concentration in queer studies from Pittsburgh, PA. who attended the event. “Their example of collaboration is one that should be uplifted, studied, critiqued and implemented in collaborative political and activism efforts in the US, despite the specific activist goals of each group.”

The symposium ended with Lebovici discussing the goals of fierce pussy as “A group show that will depart all conventions, a group show that [will] construct a whole story and a community of being part of something bigger.”