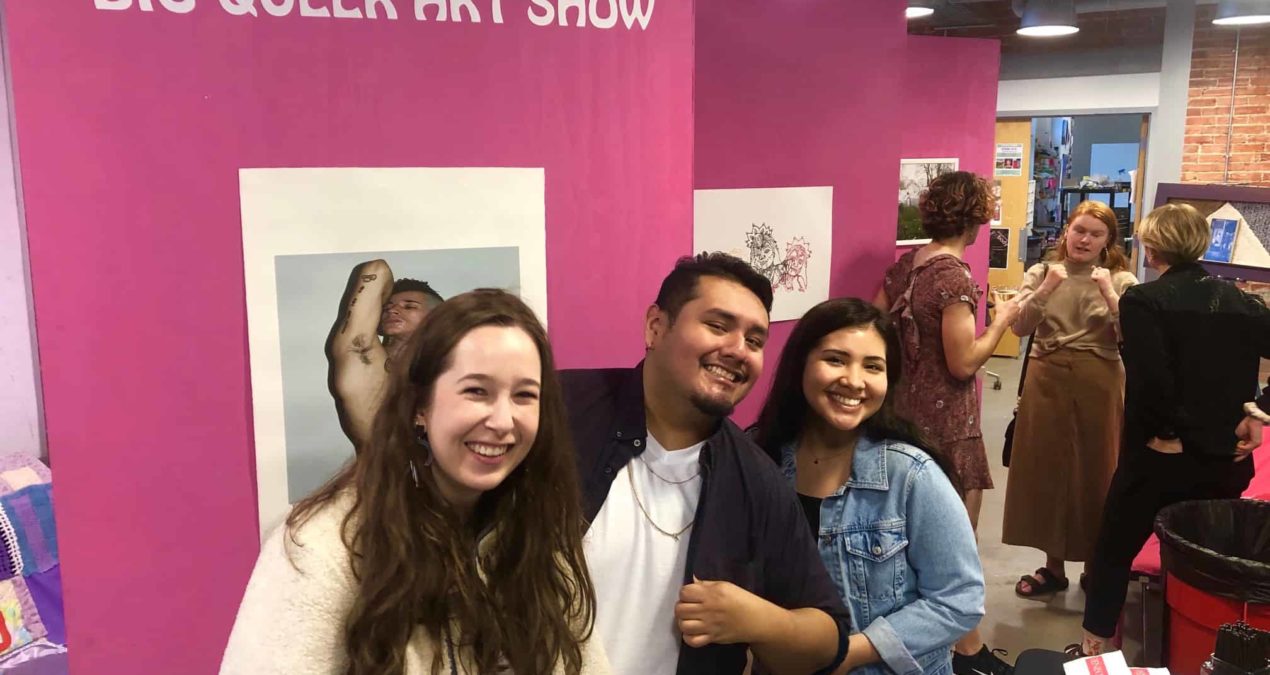 LIZ ANASTASIADIS & ALINA PANEK — On the weekend of March 29, the campus was crowded with pride and decorated with bright multicolored flags. In celebration of the 30th Anniversary of Denison’s LGBTQ Alumni Network, Denison hosted a weekend of events for alumni to come back to campus for various activities.

More than 50 alumni from the classes of 1965-2018, together with students, allies, faculty and staff came together to share stories and memories while discussing the future of the network and the university as a whole.

Denison Pride was founded in the late 1980s as the Denison Gay, Lesbian and Bisexual

Alumni Association (GLBAA). Several alumni organized the group after common hour alumni panel entitled Out After Denison, where alumni shared the stories of life at and after Denison.

“As I heard alumni talk about the impact that Denison mentors had on their lives as college students, I felt a great sense of responsibility to carry on the work of those who came before me in supporting LGBTQ+ students and working toward greater equity and inclusion on campus,” Kim Creasap, Director of the Office of Gender and Sexuality said. “My conversations with alumni also impressed upon me how important departments like the Office of Gender & Sexuality and Queer Studies are as a signal of visible institutional commitment to LGBTQ+ inclusion.”

Denison Pride’s purpose is to ensure students of every sexual orientation and gender identity feel welcome and safe at Denison, to (re)connect LGBTQ alumni with the college and with one another, to partner with faculty, staff and administration in fostering a climate of inclusion that celebrates and understands the complexity of diversity at Denison and to provide connections and resources to enable students in their lives after graduation.

“I for one never felt quite at home at Denison,” Rebecca Glick ‘03 said. “After the event, I feel more connected to the grads, the campus and the word ‘Denisonian’ than I ever have before. I think it is particularly important for the current students to understand how far the program and the campus have come, and how successful graduates can be in spite of or even because of the challenges we all faced on campus. They are us and we are them.”

The weekend of events included events over the course of Friday, March 29 and Saturday, March 30.

Highlights of the events for the Jeffrey Masten ‘86, a co-founder of Denison Pride and member of the weekend’s planning committee were the panel discussion of queer history and activism on campus since the 1960s, helping alums learn about Queer Studies with faculty leaders at that panel discussion, the “Big Queer Art Show” organized by Ron Abram that was an all-community social mixer in Bryant (followed by dinner and conversation with students in Huffman), Dr. Tim Ewing’s eye-opening group discussion of our intersecting identities on Saturday afternoon, the Saturday evening banquet, at which we celebrated our three Founders Awards honorees for their support of Denison Pride from its earliest moments: Dr. Julie Mulroy (retired from Biology), Dr. Anne Shaver (retired from English and Queer Studies), and Dr. David Woodyard (faculty member in Religion and Queer Studies).

One of the college’s most famous LGBT identifying alumni, Nina West, drag queen — also known as Andrew Levitt ‘01, gave a short video message that was broadcasted to the alumni gathering.

“Nina West’s fabulousness shows that Denisonians are of all kinds.  Nina embodies Denison values: she raises lots of money for important charitable causes in Columbus, and she’s been using her ‘RuPaul’ visibility to educate a national audience about trans people and about bullying,” Masten said. “In the video greeting, she was — of course — hilarious, and she offered ‘condragulations’ to our faculty honorees — Dr. Juliana Mulroy, Dr. Anne Shaver and Dr. David Woodyard.  She also spoke very movingly about how each of them had guided her during her time at Denison.”

West is a now-famous participant of the nationally syndicated and award-winning “RuPaul’s Drag Race” in its currently running season. In a recent episode, West reveals the life-threatening homophobic attacks that he experienced during his time at Denison. He also spoke to Out Magazine in an interview and told the explicit details on his experience.

In an email sent to the Office of Gender and Sexuality listserv, Creasap and Jeremy Torres ’18 wrote on March 26, “You may have seen Denison alum Andrew Levitt/Nina West ‘01 share a sobering story of homophobia on Denison’s campus 20 years ago. The Office of Gender & Sexuality staff wants to say to our LGBTQ-identified students in 2019: we value who you are and we are here to support you in any way we can. This makes this weekend’s Denison PRIDE’s 30th Anniversary particularly timely and we encourage you to gather in community with Denison’s LGBTQ alumni.”

“Queer Talks,” a weekly program led by Torres, was also dedicated to the discussion of homophobia on campus at the March 29 meeting. Queer Talks happens weekly on Fridays at 5 p.m. in Curtis West. If you see or experience homophobia on campus, please report it via Blue Whistle on MyDenison. If you do not wish to be identified, you can make a report anonymously by submitting the ‘Anonymous Tips’ form.

“Denison is not perfect and still has work to do as an institution – all Higher Education institutions do – but I think this past Denison Pride weekend symbolized a step in the right direction for the college and I was excited to be a part of it,” Brian Paul Allen ‘17 said.

Other founders of the coalition found the ending of the conference to be quite insightful.

“Our weekend culminated in a dinner, reflections on our history, and the celebration of three faculty members who worked with us closely from the very beginning,”  Kim Cromwell ’81 said.

The alumni gathering closed with two the alumni in attendance announcing significant gifts in support of LGBTQ students.

“From my point of view, the weekend could not have been better. Whether at our reception with President Weinberg, or chatting with students and alums at the Big Queer Art Show, I was aware of feeling grateful for being part of this unique community, this larger Denison family.  Of course, there’s always more work to do — but that’s true outside of the hill as well. Creating inclusive communities takes time and constant effort, and the work is never done. It was inspiring to be with so many Denisonians who share our commitment to a strong Denison Pride, and a thriving Denison community.”

“The Moonies” open with a blast