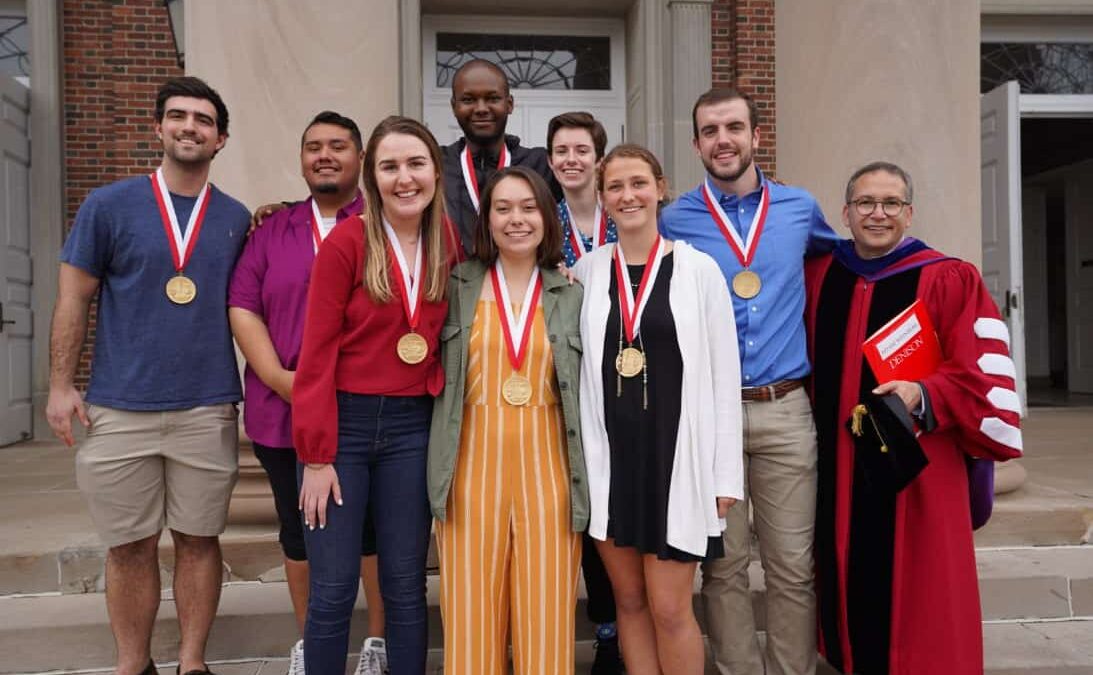 Presidential Medals are awarded each year during Denison’s Academic Awards Convocation to seniors who excel inside and outside the classroom.

Recipients of this prestigious award are students who have found ways to go above and beyond to make their presence felt within the Denison community.

This year’s eight recipients of the Presidential Medals are as follows:

Chamberlain has impressed her professors in the communications and theatre department by her ability to bring people together. Those who have gotten to know her in this setting agree that she truly embodies Denison’s values. In addition to her commitment to excellence in the classroom, Chamberlain also serves as an editor of The Bullsheet and a member of Burpee’s Seedy Theatrical Company.

Freeland Jr. has been destined to be an environmental studies and education double major since the first day he stepped foot onto campus as a Denison student. After adding art history as a minor and taking courses across a wide variety of disciplines, he has proven his ability to raise the level of the class’s intellectual engagement, regardless of what class he may be in.

Goodspeed has epitomized what it means to be a student-athlete during her time at Denison. Her reason, discipline and maturity shine bright on the lacrosse field, as well as in the classroom. Her genuine care for her peers and natural leadership skills earned her a unanimous selection of captain for her senior season on the lacrosse team, and those same qualities have always translated seamlessly over to the classroom during her time at Denison.

McCann’s title of Chemistry and Biochemistry Senior Fellow speaks for itself. Beyond his sheer intellect, McCann has caught the attention of his peers through his dedicated and thoughtful participation as a researcher. His skillset, like all of the Presidential Medalists, carries far beyond the classroom. During his time on the hill, McCann has lifted up the school’s Habitat for Humanity chapter and helped to put it back on the right path.

McMaster has excelled in the history department while also earning early admission into Medical School. In addition to being a student-athlete, McMaster has served as a member of the Burpees improv group, a DCGA representative and as a dedicated volunteer in the community. He has been recognized, among a number of other qualities and achievements, for his ability to lead seemingly any group from any style.

Meth has continuously amazed her professors and fellow students in the environmental studies and political science departments with her persistence and developed arguments. With law school plans ahead of her, Meth will certainly have left a lasting impact on the Denison campus by the time she leaves this spring. Her passion and devotion to sexual respect and promoting awareness of sexual assault have already changed this campus for the better.

Reardon has truly done it all during her four years at Denison. From the biology department, to the soccer field, to a local Newark health clinic, Reardon doesn’t appear to have run into anything she can’t handle. Aside from maintaining a nearly perfect GPA, she has also helped to revive The Synapse magazine after serving as President and Managing Editor. Reardon was also an instrumental piece in earning the right for Denison to open a Camp Kesem chapter.

Roman Jr. has dedicated himself to his work as he has pursued his Bachelor of Fine Arts in the studio arts program at Denison. He has found ways to share his passion for the liberal arts by helping students in the writing center and in studio arts as a teaching assistant. As the current president of La Fuerza Latina, Roman Jr. was key to organizing the Summit of Ohio LatinX just this past weekend.

The Provost’s Academic Excellence Award recognizes three seniors who have thrived in the academic setting during their years at Denison.

This year’s recipients are as follows:

Brown, is a mathematics major at Denison. His most recent research focused on statistical modeling and coding to create an NBA player rating system in order to predict outcomes of future games. Brown will be pursuing a Ph.D. in probability next year.

Fouke is a biology major who is extremely passionate about marine biology. Thus far, she has conducted research at James Cooke University in North Queensland, Australia, and at the Marine Biology Laboratories in Woods Hole, Massachusetts. Fouke will be pursuing a Ph.D. in marine biology in the coming years.

Caleigh Heather Marshall Marshall is a computer science and history double major. She is the recipient of the highly-sought-after Anderson Scholarship for Excellence in Science along with a number of other computer science awards throughout her time at Denison.