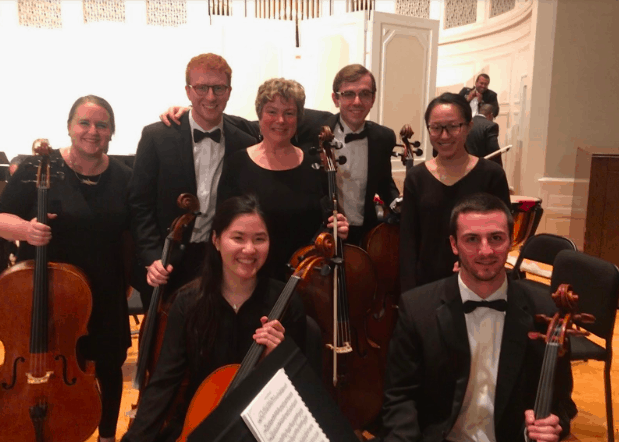 JOANNE LEE ’21, Special to The Denisonian — Going to a small, liberal arts school, it’s easy to feel like you’re surrounded by students involved in a million other extracurricular activities in addition to keeping up with academics. Sometimes, that can get stressful and overwhelming, especially at a campus like Denison, and it can be difficult finding the balance.

Recently, I had a chance to sit down with a math and music performance double major, Jimmy Fennessey ‘19. An accomplished musician, he was recently the winner of Denison’s first concerto competition and performed in Swasey with the rest of the orchestra at their concert and had his senior recital, a culmination of his 11 years of playing the cello.

“I actually came in thinking I would be a history major and a music minor, but I found myself enjoying math too decided to major in it. I still love history though! As for music, I was putting in the practice and participating in all the ensembles and figured why not just major in since the only difference was a few more courses.”

Music has been a large part of his life. He has been playing cello since 5th grade and enjoys other art forms as well.

“I spend 2-3 hours practicing every day, which includes Orchestra and private lessons. I try to practice every day because even if I miss one day, I can feel a difference, musically and technically.”

During his four years at Denison, a lot has changed, especially with the opening of the new Eisner Center in the music department.

“It’s become more structured, with more tenured and tenured-track professors joining. I think there’s also been an increase in the student involvement as well which is always good.”

What hasn’t changed is the dedication the professors and staff have.

“Dr. Kuyvenhoven has been such a big, positive impact on my time here at Denison. She’s helped me not just technically, but really helped me artistically express myself. I also really appreciate Dr. Rudd’s clear goal and the direction he has for the [Denison] orchestra. Before every rehearsal, we know the goal and we strive for that goal.”

After Denison, Jimmy will be spending a lot of time out of the country, spending his summer in Morocco learning Arabic as part of the CLS (Critical Language Scholarship) and the following year in Jordan to study the language thanks to the Boren Scholarship.

“I’ve actually always wanted to visit the Middle East, and I think politically, it’s very interesting as well. I studied abroad last Fall in Jordan and after that, I’ve wanted to go back and learn more of the language and the country.”

If there’s one piece of his advice he wants to leave readers with, its to “Do what you want to do in college, not what others want you to do.”

Running of the Bears offers food, drinks and live music