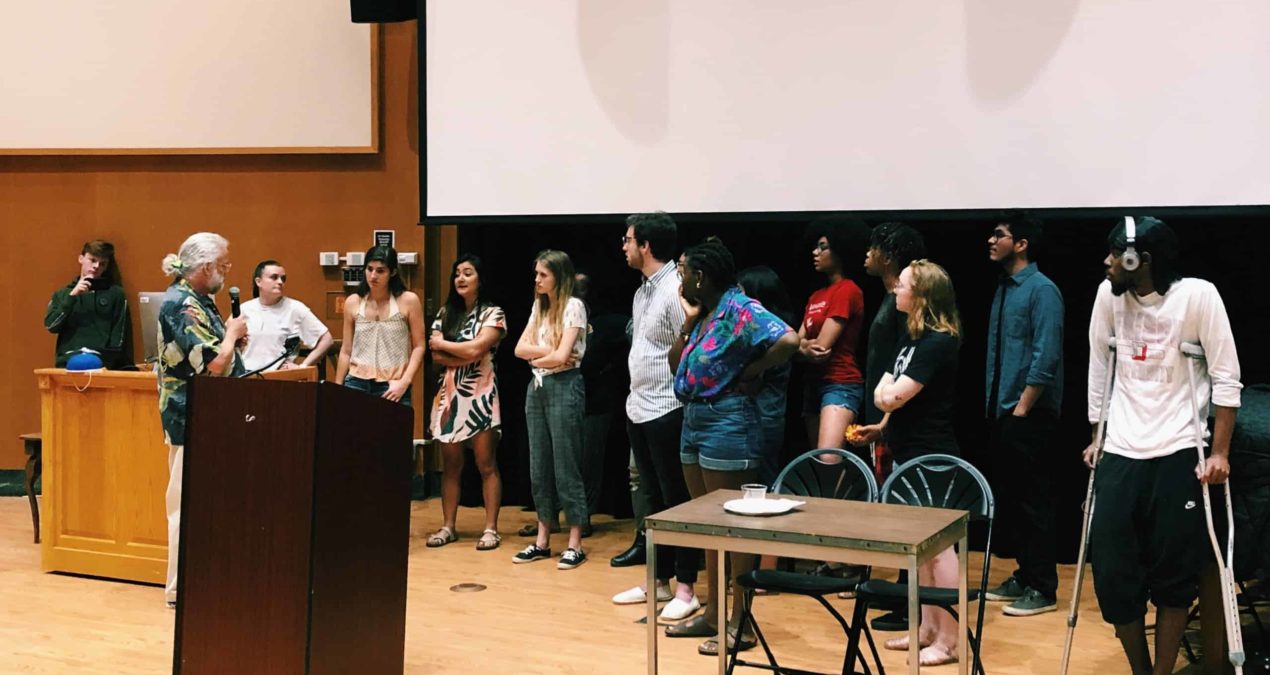 #OccupyDCGA starts a conversation with administrators about demands

By LIZ ANASTASIADIS, Managing Editor — On Thursday, May 2, a conversation was started by students to faculty about recent events on campus. Tension has been rising regarding the recent Cross Cultural Communities (C3) organizations poster vandalization, Denison Student Campus Government (DCGA) budgeting decisions for the 2019-2020 academic year and conversations about student mental health.

In response to these events, a group of Denison students came together to organize a group called #OccupyDCGA to start a conversation about these problems by demanding solutions.

The #OccupyDCGA list of demands was listed in the Denison University Student Body Facebook Group in a document signed from “Concerned Denisonians for Change.”

Generally, during a DCGA meeting, only the senators vote on issues raised. However,  the Senate passed a vote that would make the process more democratic; everyone who was attending the meeting would vote on all issues presented throughout the night. Roughly 150-200 students attended throughout the night and voted to pass the list of demands from #OccupyDCGA. Some students who could not attend watched via Instagram or Facebook live streams.

On Thursday, May 2, an email was issued from University President Adam Weinberg to the student body titled “OccupyDCGA.” The email directly acknowledges the list of demands and focused on demand #1, which pushed for a public forum to take place on May 2.

That demand from #OccupyDCGA read:

“We demand that an open, public forum take place Thursday, May 2nd in the Mitchell Center. All University operations must be suspended during this forum, classes must be canceled and dining halls (Curtis, Huffman, and Slayter) and the Library must be closed.”

The email response from Weinberg stated:

“Denison is, first and foremost, an academic institution. As we reach the last few days of the semester and prepare for finals, we have heard from students and faculty that suspending a class day will increase stress and foreclose important classroom engagement. Therefore, we will maintain a regular schedule with regard to classes and university operations and we hope that everyone will end the semester on as strong a note as possible.”

“At the same time, we are in agreement that students are raising important issues about the college. We are committed to helping to develop forums for conversations about campus culture and how the administration, staff and students can work together to address important issues that face our campus. Our conversations with faculty have underscored their interest in also engaging in these conversations. Again, we anticipate taking time over the summer to work with the DCGA and other student leaders, including C3 leaders, to develop ways to have these conversations during the fall, when students return to campus.”

Those who formed #OccupyDCGA and other student supporters responded by occupying the faculty and administrative meeting held in Herrick Hall at 11:45am on Thursday, May 2, in response to President Weinberg’s email.

“We don’t just want the people [students] who go there voluntarily anymore. There are three groups generally when that happens: the people against, the people for and all the people in the middle that lean on one side or the other. They don’t show up because they don’t want to show up,” said Serena Allegro ‘19, one of the students who helped to organize this conversation with staff.

Students are interested in trying to find a balance of well being for those on campus who feel like they don’t belong.

“At the end of the day, it needs to be more than just the same voices talking, regardless if they care or if it’s voluntary … people are dying and that is problematic in of itself,” said Evan Brooks ‘20 during the discussion. “We cannot stop things from happening because of contingencies. People care and are pulling together communities [to respond to these problems].”

The conversation ended with administrators agreeing to help organize a public forum for students and faculty to come and discuss the issues that the students voiced. The forum will take place during the afternoon of Monday, May 6.

Some faculty members expressed support toward the students and were open toward bringing their classes to the public forum if they overlap.

“It isn’t necessarily what I wanted… but it’s a step in the right direction. I will always remember this story as not quite getting there, but almost,” reflected Allegro.

Denisonians wait in anticipation for the story to evolve further in the coming days as the spring semester begins to draw to a close.