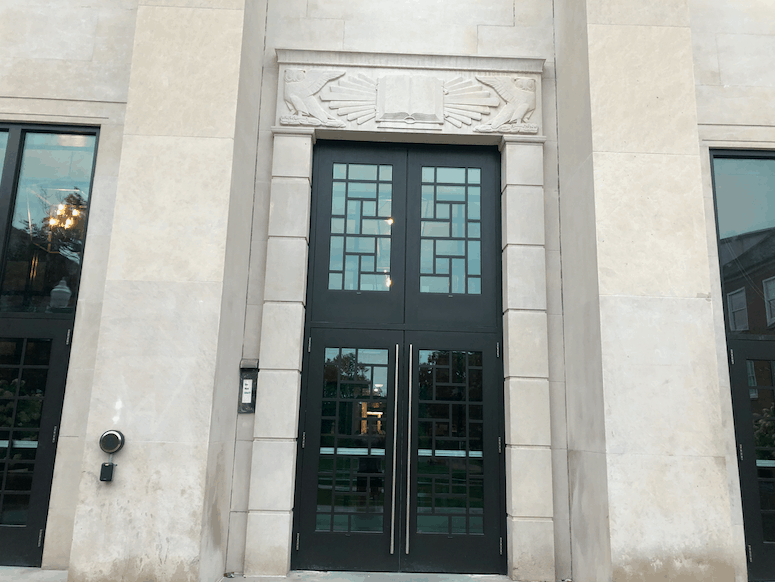 Library renovations promise to blend the old and new

NINA COSDON, OPINION EDITOR — Even after students who crowded campus during finals week left for summer, things didn’t slow down at the library.

Denison’s library was ready for renovation, which began this summer and is projected to be completely finished by the time students return in the Fall of 2020.

According to the Denison University website, renovations were made possible by a generous $7.5 million donation from Sue Douthit O’Donnell ’67. $5.7 million of the gift will go directly into the library, and will, according to University President Adam Weinberg, “add functionality and aesthetics to the library, augment the study environment for our students, and beautify our campus.”

Today’s William Howard Doane Library is the product of many renovations, which give the library its “old meets new” appearance.

Originally built in 1936, the library was expanded to accommodate the growing stacks in 1957. The Seeley G. Mudd Learning Resources Center was added in 1981, and the unique atrium and learning commons along with it. While these more modern updates were beneficial, Director of Libraries BethAnn Zambella admits that they were “tacked on” and therefore changed the original design of the library. The current renovations aim to “restore some of the historic grandeur lost in the 80s.”

Even though the renovations won’t be completed until 2020, this summer’s progress will be apparent even before people enter the building. Zambella reported that the library’s new door and updated steps will allow patrons to enter at the front of the building, instead of forcing them to walk up a side staircase in the previous design. This will return the entrance to its intended use, as well as eliminate confusion for library and campus visitors.

In addition to the outside entrance of the library, the most noticeable renovations will be in the main lobby, President’s Reading Room and other older portions of the library. Students will be excited to see the various study rooms have been refreshed with new carpeting and furniture; the West Wing study rooms, in particular, underwent a massive makeover. But in addition to refurbishing the spaces that already existed, several new study nooks were created throughout the library. All of this was done purely for the benefit of the student body and will give them the additional workspaces they requested.

Some of the library’s upgrades may initially go unnoticed. This summer, a new HVAC was installed, and the building was rewired. Although a bit less glamorous than the new façade and furniture, these renovations were just as important to the structural integrity of the building.

Since the construction is happening in phases, there will be more work to do next summer. Zambella anticipates the renovations will focus mainly on the stacks, as well as improving the viewing room on the atrium level.

The Denison librarians couldn’t be more excited for staff and students to experience these new changes. Zambella says that the contractors are working hard and hope that this summer’s renovations will be finished for the first day of class. Zambella expressed her gratitude to Sue Douthit O’Donnell for making them happen. “[Sue] wants to create a good place for students to study, but also wants it to reflect the library she remembers from her time at Denison.” This idea is why the library construction focuses on restoration as well as renovation.

Zambella describes the library project as “forward-looking while showing the right kind of reverence for history,” and believes that the finished product will be a blend of old and new.