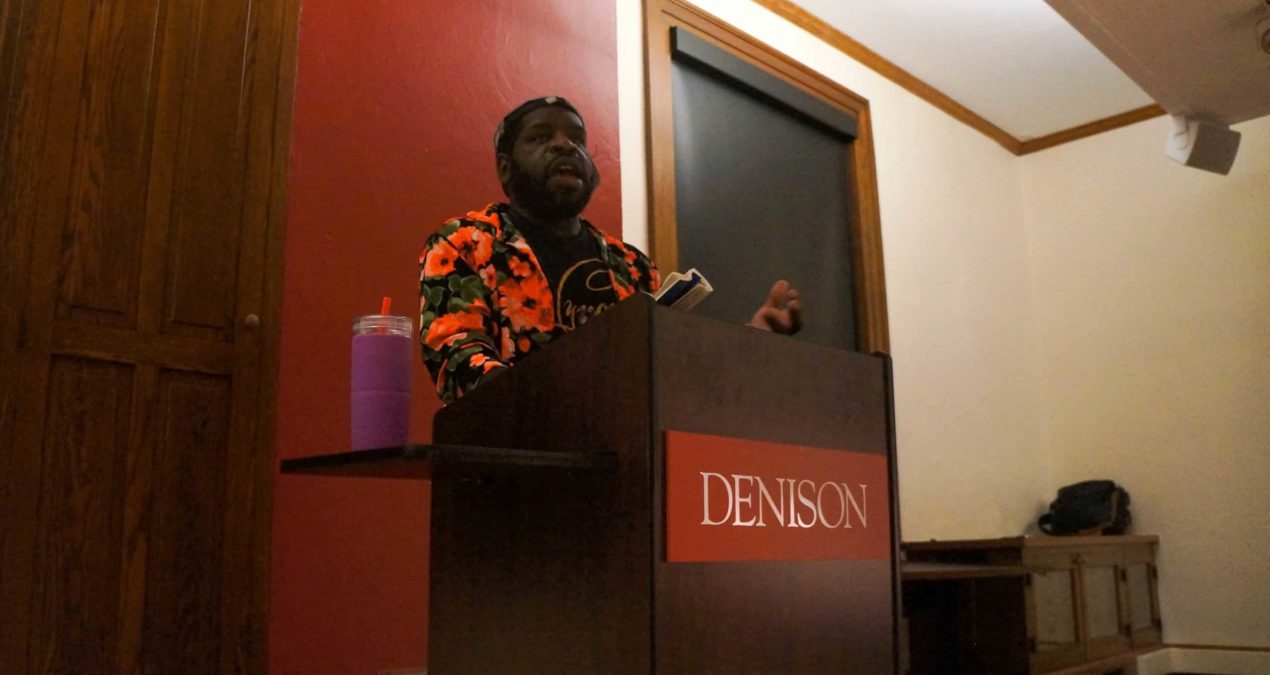 DYLAN WALCZAK, Special to The Denisonian — A native of Columbus, Ohio, Hanif Abdurraqib’s work has resonated with those far beyond his stomping grounds. His poetry has appeared in publications such as The New York Times and The New Yorker, and his essays have been favorably reviewed by The Chicago Tribune, The Washington Post and O, The Oprah Magazine. On the evening of Monday, September 9, Denison’s Beck Series welcomed the poet and essayist to the Barney Davis Board Room. If there was any doubt within the audience as to the sheer writing power Abdurraqib possesses, his selections from his most recent poetry collection, A Fortune For Your Disaster and his new nonfiction project, They Don’t Dance No Mo’, certainly defied those misguided assumptions.

Abdurraqib’s poems strike a perfect balance between humor and grief. He crafts what others may view as mundane processes of a day’s work into these gorgeous testimonies of the Black experience and the human condition. As Anne Townsend suggested in her introduction, “He shows us things we have forgotten to see.”

Before Abdurraqib read a poem about a pizza shop in New Haven, CT running out of cheese, he lightheartedly added how “the cheese is a metaphor for [his] divorce”, leading to an uproarious laugh from his audience. “How Can Black People Write About Flowers At a Time Like This,” a wide-ranging collection of poems sharing this title, delves into how Black youth cope with the deaths of other Black youth. “No Cap” commends Black hair for its individuality and resilience in the face of life’s hardships.

Abdurraqib then read from a section of They Don’t Dance No Mo’ entitled “A Few Considerations of Black People In Space”. He talked about how he once thought “Chewbacca might have been Black”, the influence of Octavia Butler in sci-fi literature, and the Space Shuttle Columbia disaster in 2003. He further utilized Michael P. Anderson, a Black astronaut and crew member of Columbia, as a frame of reference when analyzing a picture of Trayvon Martin in an aviation uniform.

While Abdurraqib reads with a sense of urgency, his breath instilling a rhythmic lyricism with each line, he speaks with precision and poise. During the Q&A session, he spoke with others about rock music, gender dynamics in the hip-hop industry, opening songs in albums, his writing process and his Twitter account (@NifMuhammad).

Part of the genius of Hanif Abdurraqib’s work is the relationship it creates with the reader. The Q&A session alone proved how he is not at all distant from others’ interests and experiences. When asked about depicting his vulnerability through his work, however, he spoke of how “people know a lot about the speaker and the work, not about [him]”. As readers, we can then only hope to fully grasp the profound and complex force that is Hanif Abdurraqib.