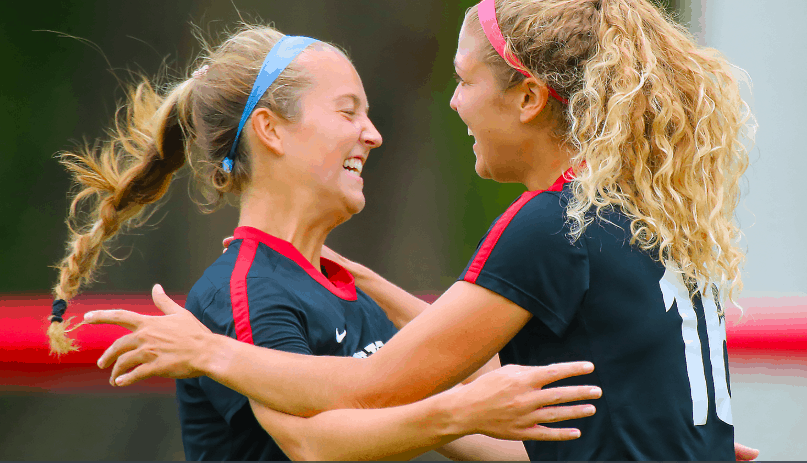 MAX CURTIN, Editor-in-Chief — Down, but not out.

The Big Red entered this week looking to build momentum from their 2-0 home shutout victory against Adrian last week, their first win of the season.

Their challenging non-conference schedule continued with a midweek contest at home against Ohio Northern, and a Saturday road matchup at #20 Centre.

Denison came into Wednesday’s game against the Ohio Northern Polar Bears with a record of 1-2-2 after a difficult start to the season.

Midfielder Kailey Knopf ‘21 speaks to the challenges the Big Red have been faced with thus far in her third season with the team.

“I think the thing we have mainly struggled with is consistency between halves during a game,” Knopf said.

In a back-and-forth game, the Big Red and the Polar Bears traded goals in the first half.

Leland Keller ‘23 got the scoring started early in the 7th minute by heading in a corner kick sent into the box by Sydney Ludes ‘22. It was Keller’s first career goal for the Big Red.

Despite the early goal, the Polar Bears were actually the aggressors for the majority of the first half.

Big Red goalkeeper, Patil Tcholakian ‘22 faced 11 shots in the opening half (four on goal) and was beaten just once in the 25th minute off a combination between Lauren Naso ‘23 and Jenna Fuller ‘21 for the Polar Bears.

The early scoring action slowed down for both sides after the game was tied 1-1 until the Polar Bears struck late in the 81st minute to pull ahead.

The Big Red had to dig deep to stay disciplined and remain committed to their gameplan.

Right on cue, in the 89th minute, Captain Kelly O’Neill ‘21 got her chance: a free kick from outside of the box and the game on the line. O’Neill stepped up and set up her teammate, Abby King ‘22 to score the equalizer and send the game into overtime.

Though both sides had their chances in overtime, neither could find the elusive game-winning goal after the two 10-minute periods.

The game finished 2-2 in what became the Big Red’s third tie in their first six games. Knopf ‘21 tries to pinpoint what her team will need to do moving forward to wind up on the winning end of more of these close games.

“It is going to take our team capitalizing on our goal scoring opportunities and taking advantage of our attacks forward,” Knopf said.

Unfortunately for the Big Red, Saturday’s matchup against #20 Centre proved to be more than the team could handle this early in the season.

The Colonels of Centre entered Saturday’s game against Denison 5-0, and had outscored their previous opponents 24-3.

The loss dropped Denison’s record to 1-3-3, but O’Neill talks about the team’s attitude moving forward after a difficult early stretch of games.

“Our biggest takeaway from Centre has to be our ability to learn something from every game. We aren’t satisfied with our play and it didn’t go our way, but we recognized where we were getting exposed on the field. We know that if we aren’t learning from these tough losses, we aren’t going to be able to grow as a team,” O’Neill said.

Despite their record, the Big Red are confident that their tough non-conference slate will pay dividends when they open up conference play.

The Big Red will look to rebound this week on the road on Wednesday against Franklin before traveling to take on #3 Messiah on Saturday. They will open up their North Coast Athletic Conference (NCAC) play during Big Red Weekend on Saturday, September 28 at 1 p.m. against Ohio Wesleyan.

New football coaching staff show passion on and off the field