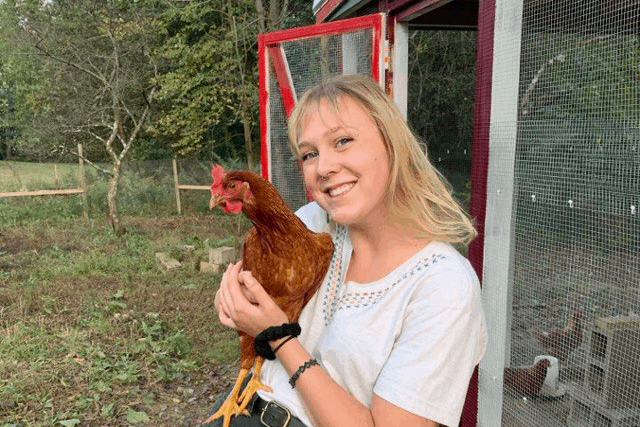 LAURA LAPHAM, Arts & Life Editor—The homestead is a home not only for students, but also for animals.

There are at most 12 students living there during the school year and summer, in addition to 4 wonderful cats: Blanket, Duke, Henshaw and Toast. They all make one big homestead family.

But that family is not done growing, and now the homestead welcomes 10 new chickens into their mix.

The plan to build a chicken coop started in the summer, with designs being created. Fiona Ford McNichols ‘20, an anthropology major from Chicago, designed the chicken coop.

“Personally, I’ve always been interested in architecture and specifically sustainable architecture. I was really interested in how to literally build something. I’ve been designing things ever since I was little, but I have never brought one of my sketches to life before. I was working with two carparters in order to take the sketch to reality to fit the needs of these creatures. I really enjoyed the process of designing the coop with the needs with the chickens in mind,” McNichols said.

There was space already available with an old chicken coop sitting where the new one would be built. The coop took some time to build and many things had to be taken into mind.

The coop was built mostly over the summer, but it was not finished before the school year began.

Maria Kennedy ‘22, a biology major from Medfield, Massachusetts, said, “Once we had a date set for the first build we had to tear the old coop down which was kind of fun […] John was a carpenter who came and helped us and honestly without him we would have been so lost so we’re definitely grateful for his help. He and Kevin, another carpenter, had also been the ones to help us order the materials we needed so that was really great.”

The homesteaders, or homies, gave themselves three weeks to finish the building of the coop. As excited as they were, this deadline motivated the homies to finish the project, rather than letting the project sit and stagnate for too long.

The night before the chickens arrived at the homestead and the coop was built, the homies had an epiphany. The chicken coop was not painted, and the chickens would be there tomorrow.

In the words of Kevin Katz ‘20 an environmental studies major from Shingle Springs, California “We need to paint it. We have to make it pretty. They have to he proud of where they live.”

Many of the homies then took to action and started painting the chicken coop until 1:00 in the morning.

The chickens then arrived the next day to a wonderfully painted chicken coop.

The homestead now is home to 10 chickens, and the homies now collect chicken eggs to use for meals.

There are some future plans for the chickens.

Fiona McNichols ‘20 says, “now that it is built, it is really interesting to see rye chickens interacting with that spaceman we are still in the process of adding things to make the chicken’s better and more fun. In thinking about building a chicken swing.” The future of the chickens at the homestead look to be wonderful as they are added to the homestead family.