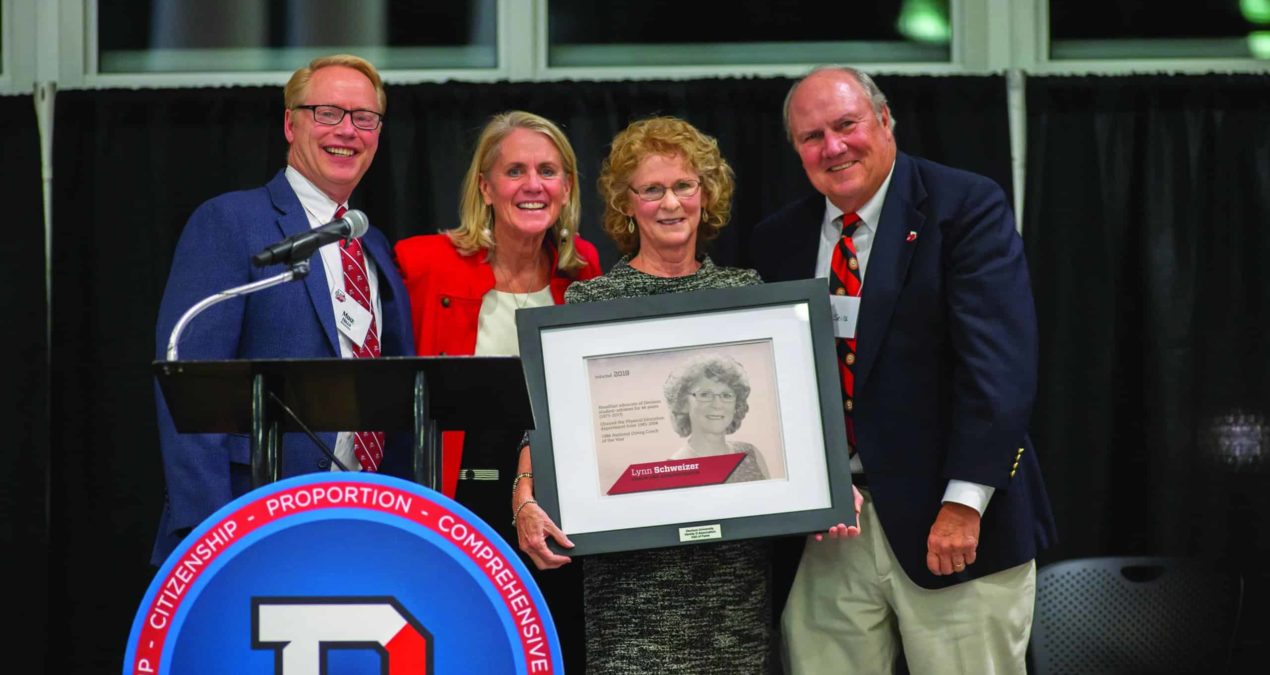 Lynn Schweizer: Honored for 44 years of dedication to Denison

AARON SKUBBY, Asst. News Editor—Lynn Schweizer was a teacher, coach, administrator, and friend to generations of students and faculty. She saw and helped fight for dramatic improvements in equity for women’s sports over the course of her career following the passage of Title IX.

Recently inducted into the Varsity D Athletic Hall of Fame, Schweizer retired in 2017 after 44 years at Denison. She coached women’s basketball, swimming, and diving, as well as briefly coaching synchronized swimming and men’s diving.

After coaching, Schweizer served as an administrator, acting as chair of the Physical Education Department for 19 years.

Even before her long tenure as a coach and administrator at Denison, Schweizer called Granville home. In a lunch interview, she reminisced on how her parents owned Canards Jewelry and Gifts store in Granville, and her high school swim practices held at Denison.

After attending Ohio University, Schweizer worked briefly as a high school teacher and swim coach until she found a job at Denison.

Schweizer began as the head women’s basketball coach in 1973, one year after the passage of Title IX. In her Hall of Fame induction speech, she described the battle for equity in Denison Athletics. She said: “with the implementation of Title IX, Denison athletics had a lot of hard work ahead of them.”

Schweizer told stories of the process of seeking fair treatment for women’s athletics. “equity was slow to come,’’ she said in her speech. She recalled, “I often took basketball game stats on the bench while coaching and at the end of the game I did the sports write-up in hopes that the paper would print it. They didn’t, very often.”

Women’s athletics faced a laundry list of inequalities. They had no assistant coaches, only one locker room and no athletic conference of their own. But Lynn Schweizer and her players fought to get what they needed. Women’s sports had no athletic trainers, so Schweizer took a basic athletic training course to help her players. She told of how women could only have their game uniforms washed, so Nan DeBord, who is now Denison’s Athletic Director, placed her dirty practice uniforms on the Athletic Director’s desk.

But things got better. The NCAA expanded to include women in 1981. “In 1984,” she explained in her speech “The North Coast Athletic Conference was created with the founding principles of gender equity as well as sports equity.” As Schweizer explained in her interview, “when I was hired there were 2 full-time and 2 part-time women coaches/administrative staff and now there are 26 women serving in roles of coaching, teaching and administration.”

“I absolutely loved my career at Denison,” Schweizer said in her speech, “And it is because of the coaching staff, the students, the administrative staff.”

In an email, she left a quote from Charles Swindoll:

“I am convinced that life is 10% what happens to me and 90% how I react to it. And so it is with you…we are in charge of our attitudes.”