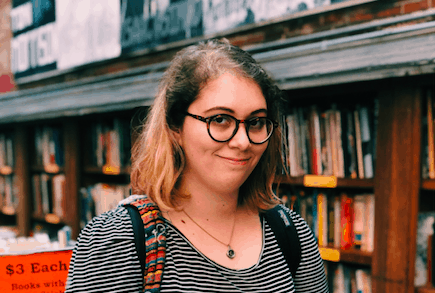 LIZ ANASTASIADIS, Managing Editor—Imagine you’re going back to your dorm to watch Netflix on a Friday afternoon. Opening your phone to scroll on Instagram, you receive a message from another student: It’s a video of themselves peeing on a The Denisonian newspaper, with your name under the headline. Their piss engulfs the paper before they flush it down the toilet.

Honestly, I was afraid. I was angry that I was afraid. I didn’t know what was going to happen. Would they try and hurt me? After I reported them to Campus Safety, I found out that the student who sent the video to me was already suspended for other reasons. Still, I felt like a target. They had a clear message — of disrespect, of silence.

Weeks later, I still look over my shoulder when I walk on the quad. This wasn’t the first time it’s happened. It won’t be the last.

As an aspiring journalist, it saddens me that I have to think about this, that I can’t write the truths I discover without hatred, anger and fear on the horizon. However, it’s obvious that it would be even worse for larger media channels to get this type of treatment. I wonder how many calls and emails that The Times receives per day.

Social media plays a large role in this as well — think of every internet troll comment you’ve ever read. And imagine them speaking to you about something they heard their grandma said and claiming its the truth. What a spit in the face to researching journalists, honestly.

Have you heard of doxxing? It’s when someone publishes private or identifying information about a particular individual on the Internet, typically with malicious intent. Think of someone’s home address, phone number, email, Twitter, Facebook and so on being shared with every internet troll who despises them. This happens to journalists often in the business — it puts the jeopardy of the reporter’s lives at risk but also threatens the family members, children and anyone closely related to the person, treating them as a target. Typically, this practice is used by hate groups and angry readers to scare the writer into silence.

As our Editor-in-Chief, Joey Semel said in his opinion piece last week, the idea of “fake news” is on the rise. “Fake news” and “misinformation” are abstract terms, which gives people in power — such as President Trump — room to weaponize the term in order to denounce news they don’t like. This has dramatically exposed more Americans to the debate around the problems it causes for society and likely impacts their view of it as an important issue.

Just a few years ago, those phrases were meaningless. Today, according to a Pew Research Center study, Americans rate it as a larger problem than racism, climate change, or terrorism.

This makes the problems for journalists harder than it has to be and the hate mail to pile up. Not only that, but journalists are being killed all over the globe for simply doing their jobs. This year, 16 journalists have been murdered globally with confirmed motives. In 2018, 36 were killed. Four of them were in the United States, from the Capital Gazette mass shooting.

Do we stop reporting then? What if you have a family of your own? How do you protect them? Yourself?

The media and journalists are important and necessary for social, political and governmental progression. Without them, we would get nowhere. Without them, there would be nothing to talk about. Imagine a world with no news. That’s a world I’d rather not live in.

The smirk: things are about to change for the better

How to Increase Productivity: 3 Tips to Take Back the School Year

Campus “Safety” needs to do better