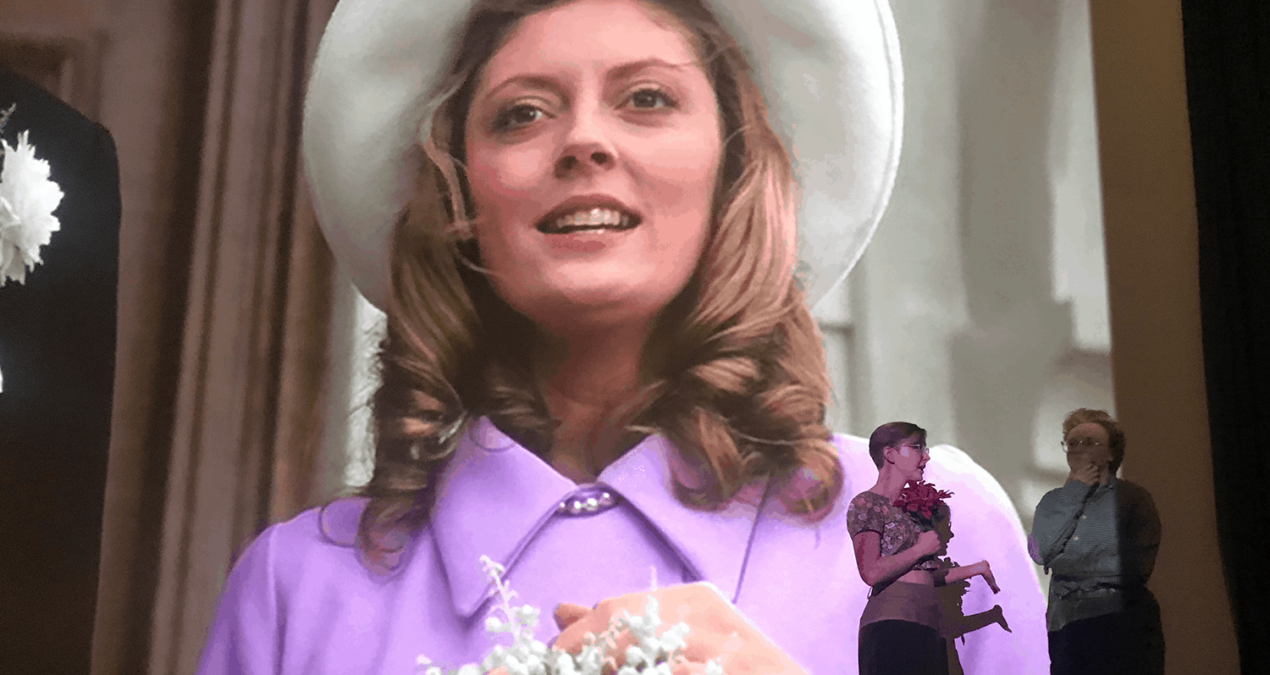 ALINA PANEK, News Editor—It was the first time that students were excited to stand on the Slayter auditorium stage with the iconic lipstick smear “V” for (Rocky) virgin smeared on their face. Denison Film Society (DFS) and The Rocky Horror Picture Show shadowcast production welcomed all of the Denison community that were 18 years or older to their midnight premiere. Shadow acting is when actors mimic and improvise the acting of the movie that is rolling on the screen behind them. Halfway through the movie, many of the main actors swap their roles for rest.

The co-directors, Lily Anderson ’21 and Maggie McCann ’21, started the show by thanking DFS (they told me later that they particularly appreciated Gillian Spivak ’20 of DFS), welcoming the crowd and encouraging the “virgins” to come onstage for a surprise fun activity that chose the first lapdances. They also reminded the audience that no pictures were allowed without permission — it quickly became clear about why this rule was enforced as the ensemble came out to perform in the first few minutes. Throughout the show, the shadowcast ran through the crowd and engaged with the audience members in the first two rows, playfully named the “splash zone.”

The audience that filled the Slayter auditorium was on their feet, shouting, dancing, singing, and playing along with the actors. “I have a lot of fun dressing up and singing along every year,” Natania Chaskes ’21 said. The returning audience members know that the encouraged attire is lingerie. “Also, several of my friends have been participating for the last couple of years so it’s really nice to go and support them.”

The scandalous production was the highest level of audience attendance and engagement many Denison students had ever seen.

“I was the stage manager my freshman year and LOVED it,” Anderson said.

“Since then I have been a director and each year seems to get better! Knowing me from class or any other activities, I don’t think people would imagine how much I love “Rocky Horror.” It’s very relaxed and a great safe place for the queer community. We really try to make sure everyone feels comfortable and confident on stage and that’s why our cast is so big, it’s hard to turn people down from roles! I’d encourage anyone to audition because there’s no show quite like it.”

The Rocky Horror Picture Show originally premiered in 1975 and has been a cult classic for Americans for decades. The production is a parody/tribute to the science fiction and horror B movies of the 1930s through to the early 1960s. The plot makes absolutely no sense, which makes it even more fun for students to shadow act.

The story follows a young engaged couple, Brad Majors and Janet Weiss, whose car breaks down in the rain near a castle. Seeking a telephone to call for help, they discover the castle is occupied by strangers in elaborate costumes celebrating an annual convention. They soon meet the master of the house: Dr. Frank N. Furter, a cross-dressing mad scientist from “Transsexual, Transylvania” who creates a living muscle man, the titular Rocky Horror, in his laboratory. The couple are seduced separately by the mad scientist and eventually released by the alien servants who take control.

Despite its nonsensical plot, some of the actors love Rocky Horror for exactly that. “Rocky Horror was absolutely insanity,” said Kevin Katz ’20, who played Lips and Brad Majors 2 at the end of the production. “And in the best way possible! The energy of all the cast and workers on the set, the butterflies we all felt while performing, dressing up all sexy, like holy cr**, I’m so happy I stepped out of my comfort zone and auditioned!

“I had no idea what Rocky Horror was until I watched it my first year. In that moment I was hooked – unfortunately it took me three more years before I even auditioned to be in it, but I am so glad I did!”

“Everyone that worked on Rocky rocked, haha. I wish I had done it earlier on in my Denison career because it was one of the most fun things I have ever done on this campus.”

The show is an annual tradition on campus, so if you missed this show, you’ll get another chance next year!