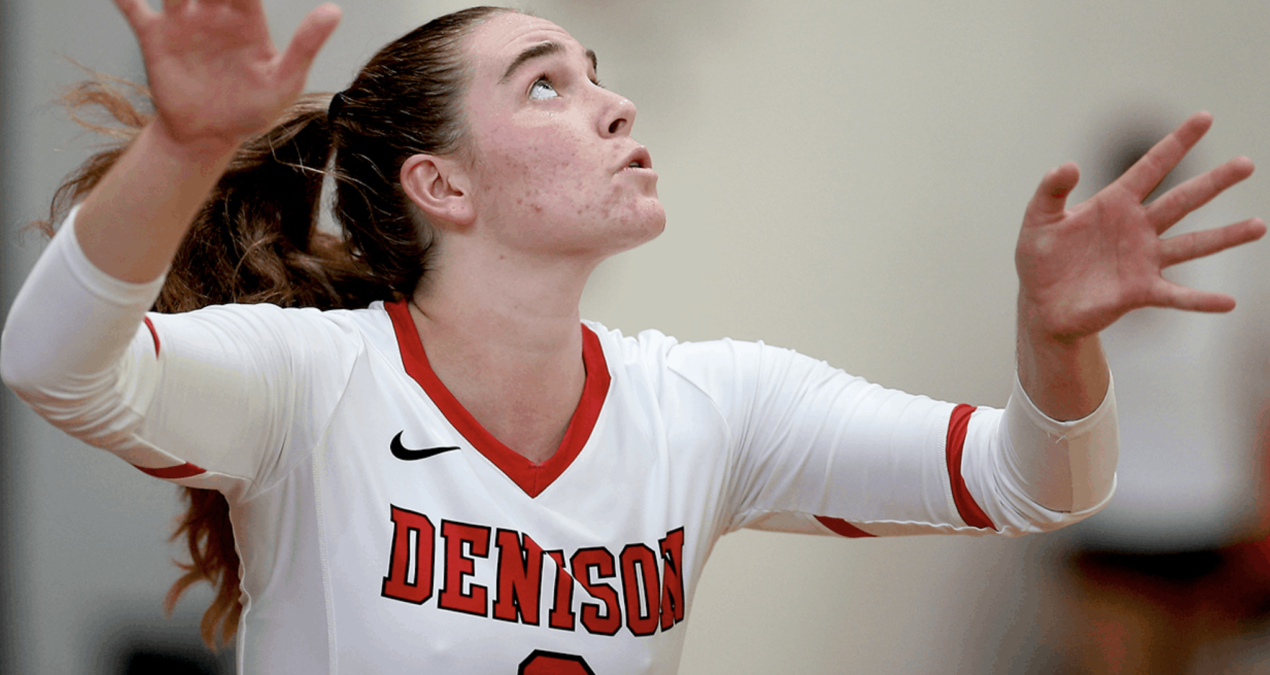 CORDERO L. ESTREMERA, Asst. Sports Editor—Success is more than solely going undefeated or obtaining silverware. It’s progressing and accomplishing goals both small and large. This season the Big Red improved upon their record last season of 11-15 to 18-8. They achieved not only a winning record, but also a deep run into this year’s NCAC Conference Tournament compared to last season.

In the championship, Denison fell to DePauw 3-1, failing to capture an automatic bid to the 2019 NCAA Division III tournament. Despite the loss in their final contest, the 2019 Big Red Volleyball season was one of many victories.

Sophie Tight ‘23 reiterated this: “This season was a success. The success of the season was more coming in the gym every day, working hard no matter what, and forming the bond we have as a team, not to mention the awful and hilarious dance moves that were shown on game days.”

In the first set of the championship matchup, DePauw wasted no time taking an early 2-0 lead. Denison responded quickly with two points of their own. This set was highly contested until late, when the score was 13-12 in favor of DePauw.

DePauw followed this by 6-0 run during which they stole the momentum of the game. Both Emma Woerner and Sophie Tight led the Big Red in a rally, in an effort to tighten the score. However, the set ended 25-19 in DePauw’s favor.

Denison’s resilient nature was on display again during the second set. The Big Red had to work their way back from an early 6-2 deficit. This seemed a nearly impossible task because for every point Denison scored, DePauw turned around and matched it.

DePauw pushed their lead, creating a seven-point gap between the two teams. Again, the Big Red did not shy from the task that lay in front of them. They continued to compete until the final whistle. Eventually, the period ended 25-16 in DePauw’s favor.

DePauw now held a commanding 2-0 lead. It would have been very easy for most teams to pack it in and roll over in the third set. The Big Red aren’t most teams, though.

They remained true to the strong character they’ve built as a team. This team consists of determined individuals who care not only for the sport but for their team. “We have become a family through the many hours of hard work and joy experienced this season,” Tight said.

“As a freshman setter, I was absolutely terrified coming into this season; not knowing anyone but somehow having to take up the commanding role a setter usually fills on the court — it seemed impossible and daunting. My teammates made me feel comfortable right away while challenging me to be the best I can be and I think it worked that way with everyone on the team,” Tight added.

Late in the third set, the Big Red had their first real chance of stealing a set from DePauw with a 19-18 advantage. They capitalized and scored six more points to force a fourth set. Ultimately, DePauw triumphed and won 3-1.

Again, this game and this entire season indicates a bright future ahead for the women’s volleyball program. They will look to continue trending in the right direction next season as they did this year.

Tight spoke to the comradery of this year’s team while also looking forward to what’s ahead for her and her teammates.

“I think we all made a connection really quickly this year and these coming years will be exciting. The seniors are truly leaving a great legacy on DUVB,” Tight said.