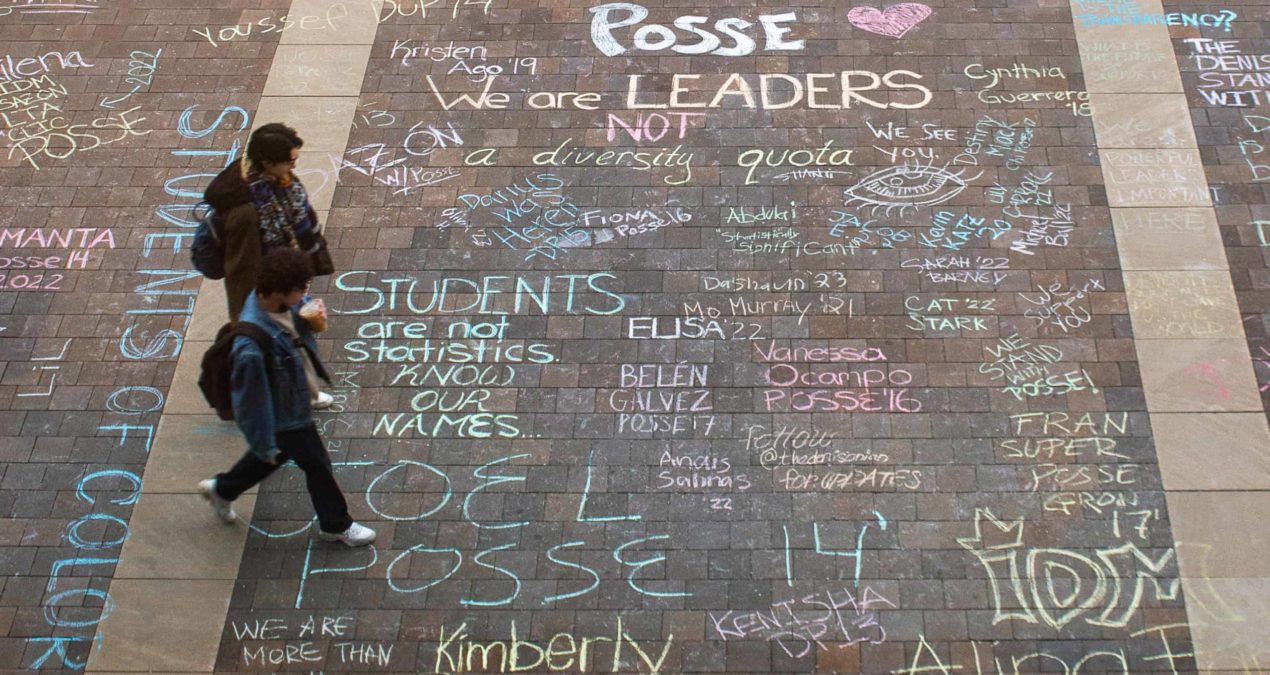 Denison splits from the Posse Foundation

On Tuesday, December 10, University President Adam Weinberg alerted students, faculty, staff and alumni via a mass email that Denison would be ending its partnership with The Posse Foundation. The Posse Foundation and Denison’s Posse scholars were not aware of this final decision until the email announcement.

“I regret that I didn’t do a better job talking about the leadership part of Posse,” said Weinberg in an interview with The Denisonian. “That was my mistake, it’s a mistake that I will own. Posse is absolutely not a quota, and the students who have been brought to Denison are incredible… at its core [the decision is] really about trying to do a better job around affordability and access, it’s about really trying to devote more resources to our ongoing work toward diversity and inclusion.”

Those who were involved in the decision were senior administrators, and faculty who used to be Posse mentors were also consulted. However, students were not part of the conversation.

Weinberg continued, explaining that they were forced to prioritize making Denison more affordable for all students and are shifting how they distribute financial aid. Currently, Denison meets 100 percent of a student’s financial need, which isn’t common in most colleges. Their dedication to promoting diversity, inclusion, and equity is their priority alongside need-based aid. Posse is a merit scholarship, not a low-income scholarship. Therefore, it gives full-tuition scholarships to students who may not have a financial need. Ultimately, Posse wants to give students scholarships that aren’t need-based, believing merit scholarships to be equally valuable.

Posse is a national U.S. nonprofit organization that identifies, recruits, interviews and trains high school seniors to form diverse teams of leaders.  After three rounds of interviews, each team usually has 10 chosen Posse Scholars to attend partnered universities. Until Weinberg’s announcement, Denison was partnered with the Posse Foundation offices in Chicago and Boston since 2001.

The class of 2024, the incoming freshman class, will be the last group of Posse Scholars, who were also notified simultaneously that the partnership was ending upon receiving their scholarships. Denison has funded over 300 Posse Scholars from Boston and Chicago with an education, which sums up to millions of dollars of scholarships from Denison over the years.

This was unexpected, but none were more surprised than Denison’s Posse scholars themselves. Alumni, current students and the foundation itself were not alerted until the mass email was sent.

“At the end of the day, Posse is a leadership and merit scholarship. That’s what it is.”

President Weinberg admitted that communicating this information all at once and via email may not have been the right decision.

This sentiment was echoed by Baltazar Aguirre III ‘21, a Chicago Posse scholar. According to Aguirre, “For now, what the institution and Adam Weinberg can do is maybe not rectify the issue completely, but formally apologize for the way in which all of this was communicated and just be very transparent from now on.”

Lariona Jacobs ‘20, a communication and anthropology/sociology double major and Boston Posse scholar, wonders what this will mean for the remaining classes of Posse scholars: “I try to be a cheerleader for Denison and remain optimistic, but this news makes me feel like I have to do all these things in my time left here to make sure underclassmen are supported the way I was.” On the way Posse was described in the email, Jacobs said “it initially brought a lot of hurt to me to see Posse described in that way, and I know other students and alumni were hurt as well.” Jacobs said she was sad that Posse was no longer going to be part of Denison.

Nguyen expressed a feeling shared by many students: that President Weinberg had mischaracterized Posse in his email. “He viewed Posse as a diversity scholarship…At the end of the day, Posse is a leadership and merit scholarship. That’s what it is.”

On the day of Weinberg’s announcement, Tuesday, December 10, a previously scheduled “Kickback” event with Multicultural Student Affairs was repurposed to give students a space to discuss the end of the Denison-Posse relationship. The meeting was facilitated by the Assistant Dean of Students and Director of Multicultural Student Affairs Trinity Jeter ‘04 in collaboration with the First Generation Network, a student organization.

During the meeting, students voiced their concerns to faculty and administrators who were in attendance. Most expressed outrage, confusion and shock to the news. Faculty didn’t have answers to the questions raised, simply because they weren’t aware of the decision. They listened and attempted to support students as much as possible.

On Friday, December 13, students gathered at the flagpole and wrote their names and shared messages to the campus in response to the news about Denison’s split from Posse.

Deborah Bial, the founder and president of The Posse Foundation, describes Posse scholars in an interview with The Denisonian as “unbelievably talented, smart, ambitious young people… They’re gonna go lead in a way that we haven’t seen before in this country.” Bial goes on to explain that what Posse aims to do is award these students, not for their need, nor their diversity, nor their test scores, but for their potential to make a difference. Bial highlights the diverse backgrounds of Posse scholars and the competitive nature of the program, adding, “What that means is that these students earn their place because they are meritorious.”

Students and administration alike acknowledge that Posse is not a cheap program. Every year, Denison awards 4.5 million dollars to Posse scholars, along with 250,000 dollars for additional events and mentors, such as the Posse Plus Retreat, as well as a fee to the foundation. Now that Denison has moved on from Posse, the money will go to the college’s need-based pool to aid students, as well as add new programs and coordinators to encourage diversity and inclusion on campus.

“I think we had a great partnership with Denison. Things change over two decades,” says Bial. “Institutions may decide to go in a different direction. In all honesty, I really think Denison has been amazing… I have nothing but positive things to say about this partnership. Partner colleges may come and go but we’re really happy that they understand what our model is.”

Currently, plans are being made to celebrate Posse scholars and their myriad contributions to the campus. Some students suggested a ceremony commemorating the history of Posse at Denison where past alums will be invited as the class of 2024 graduates.

Opportunities for community dialogue on what comes next will start in the spring 2020 semester. In an email sent to Denison Posse Scholars on December 15, President Weinberg said: “I would also like to find time early in the next semester to meet with Posse students, mentors and other campus leaders to more fully explain the decision… I want to make sure that students have a voice in setting new directions we take in the future. We have an opportunity to learn from one another.”

President Weinberg emphasized that the money that generally goes to the Posse Foundation will go directly benefit students after the partnership has ended. In addition to funding scholarships for need-based applicants, the money may fund a new position in multicultural affairs or be used to improve the first-year experience. Ultimately, President Weinberg wants students to decide where the money should go.

Aguirre also advocated for Denison’s administration to involve students in future decisions, “You have to recognize that the student body is a part of the school,” he said. “If they’re not in the know… how can we ever trust the stability of the institution?”