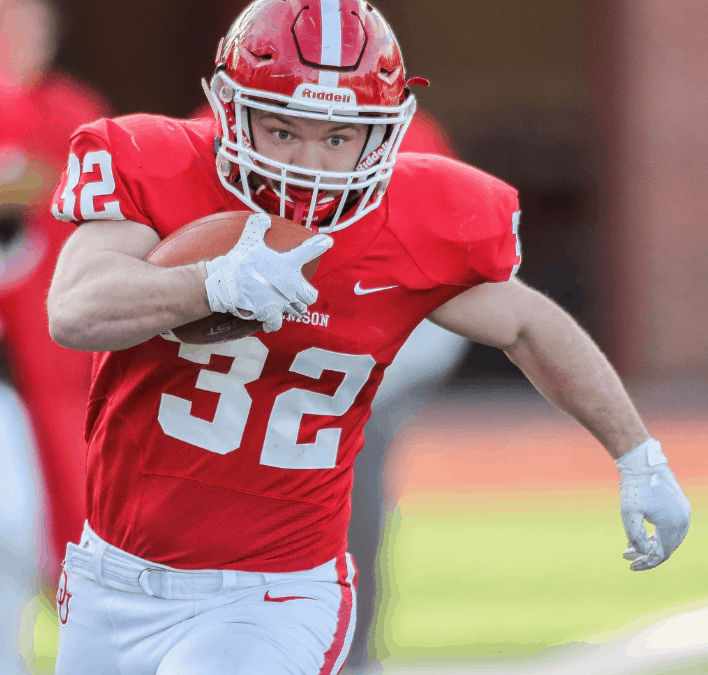 JOEY SEMEL & MAX CURTIN, Editors-In-Chief — When you look at him, he doesn’t necessarily look like the typical running back.

At 5’10” and 205 pounds of pure muscle, Minton embraces his role as a bruiser. If you watch him run, he always finds a way to fall forward. Well, that is when he’s not breaking away for touchdowns after running through defenders on his way to being honored as North Coast Athletic Conference Player of the Year.

“Obviously I’m not a burner when it comes to speed — I know that. Sometimes I can make people miss, but that’s not the strength of my game either, and I know that, too,” Minton said.

“I’m not gonna run just to get tackled…I’m gonna run and see how far I can go.”

“I know, especially in our league, I’m bigger than a lot of the linebackers so I try to just impose my will on them. I’m not gonna run just to get tackled…I’m gonna run and see how far I can go. I feel like with a lot of running backs, they run and see a defender and then they just get tackled… I’m guilty of that too sometimes when I’m tired, but a lot of times I try to just go downhill and smack this guy in the mouth and make him not want to tackle me,” Minton added.

Minton’s tough-nosed running style was evident throughout his career. He was only stopped behind the line of scrimmage 13 times in his 616 career rushing attempts for the Big Red.

Despite his outstanding career at Denison, Minton didn’t wind up in the Big Red backfield right away.

“I was recruited by various schools coming out of highschool, including some Division I FCS schools like Drake which was where I went to initially,” Minton said on his recruitment out of high school.

Ultimately, being closer to his hometown of Pittsburgh, Pennsylvania and getting the chance to earn more playing time became deciding factors for Minton’s transfer in the spring of his freshman year.

“I didn’t really like it, and honestly I was probably never going to see the field there,” Minton said about his short time in Des Moines, Iowa at Drake.

When the time came, Minton came back into contact with Denison’s offensive coordinator, Austin Holter, who recruited him heavily out of high school.

“I did another visit here with Nick Morton and Canaan [Geble] and that sealed the deal and I just really fell in love with it,” Minton said.

During his last career game, Minton completed the best season by a running back in Denison’s history, setting records for rushing touchdowns and yards in a season.

He’s modest, too. He didn’t even know the records were in sight.

“I had no idea about the single-season touchdown record until Coach Espinosa mentioned it during the game after I tied it with my second touchdown,” Minton said.

Both record-clinching plays came in the fourth quarter, something not unique for Minton. When other players get tired — even when he gets tired — that’s when he knows it’s time to push.

“When you’re in the huddle and you look over, you can sometimes just see them [the defense] getting tired and you just start thinking to yourself, ‘Okay, now it’s time to just go’… It’s kind of fun in a way to get to see them just break a little bit,” Minton said. “I think that also helps later on in the game when people are getting tired…that’s when our whole offense starts to click. The offensive linemen are like that too, so it’s just our style.”

It’s the same way as the season starts to get later. While some players grow tired as the season goes on, Minton does the opposite. In his last five games, Minton carried the ball 33, 37, 27, 38 and 25 times. It culminated in a career high 255 rushing yards at home versus Kenyon in his final game to help set the single-season yardage record with 1,550.

While Minton has been racking up record-breaking numbers during his college career, he definitely isn’t the first from his family to have found success carrying the football. Both his dad and his grandpa played running back as well. His brother also was an offensive lineman.

“I have obviously never gotten to see my dad or my grandpa play, but they have been really instrumental — they’re my biggest critics, but rightfully so. That being said, they’re always on my side and always supporting me, and they both are really knowledgeable about the game. My brother too…even more so than my dad, grandpa or myself, he is very knowledgeable about the game,” Minton said.

It has been a transformative few seasons for the Big Red program, and Minton is a large part of why. It would have been easy to chalk this season up as a transition year following the loss of record-setting quarterback Canaan Gebele.

However, according to Minton, the mindset was the same coming into this year.

“We picked up where we left off. We’re a really tight knit group of guys. I think it’s a big reason for why we were so successful. We knew losing Canaan and coming into the season with a first-time starting quarterback that there was going to be a heavy emphasis on the running game. Throughout the year, the coaches really made sure the offensive linemen and I were taking care of our bodies… they made sure we were doing everything we could to stay healthy,” Minton said.

“I think Drew did a really great job, and we were able to do a lot of the same stuff we did with Canaan. Week to week, we started to open up the playbook more and more as Drew got comfortable. Drew is really good when we can establish the run because he’s really good off of play action. Once we were able to establish the run, we could take some of the stress off Drew, tighten up the box and just go deep,” Minton said.

As for next season when they lose the senior tailback, Minton has full confidence in his guys to continue forward with the program’s success.

“I really think the guys we have to replace all of us that are leaving are totally capable, and I wouldn’t be surprised if they’re better than some of the guys we had this year… not a knock to our guys, but I think that just speaks to the program and how it just keeps getting better and better.”

Minton’s days of trucking defenders may be over, but he continues to impress with his work off the field. What’s next? Med school.

“I’m currently in the process of getting into med school. I’ve submitted all my applications and I’m starting the interviewing process… another four years of school which will be a grind for sure, but then I hope to eventually become a physician.”

Minton is currently a semi-finalist for the Gagliardi Trophy, given to the Division III player of the year. He finished the year ranked fourth in Division III in rushing yards, seventh in rushing touchdowns and third in total touchdowns. The four finalists for the award will be announced on Thursday, December 12.