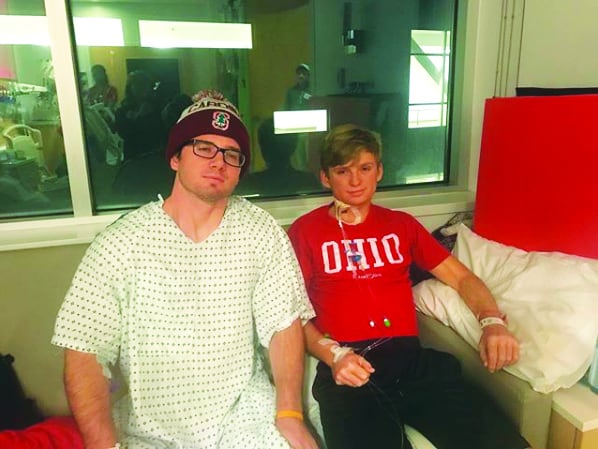 Griffin ’22 and Bailey ‘20 Hayden on cancer and brotherhood

by Lena Massaregli
No Comments

LENA MASSAREGLI, Arts & Life Editor—On Feb. 28, 2013, Griffin Hayden, ‘22 was diagnosed with cancer, at just 13 years old. His initial reaction was one of complete shock, and he assumed the worst as anyone might. After he completed four months worth of treatment, he was placed in remission, but then a year later, Griffin relapsed and had to undergo an additional six to eight months of treatment.

Throughout those months, Griffin had two bone marrow transplants. He says, “When you get a bone marrow transplant, you get something called Graft-versus-host [Disease]. They also call it GVHD, which is an abbreviation. What they treat that with is, my skin developed a rash which is GVHD, you basically get a new immune system but you don’t get new skin. If I were to get a sunburn, the cells would react to that, and work to heal it. But when you have two cells that aren’t native, it causes Graft-versus-host and they treat that with Prednisone, which I was on really high doses, which caused Avascular Necrosis–basically the bone softens and deteriorates, which happened to my hips, and I had to have them replaced.”

Over the summer leading up to the 2019-2020 school year, Griffin was informed that he would need a kidney transplant.

That is when Bailey Hayden, ‘20, his brother, stepped in. Bailey expressed that the decision to donate his kidney was an easy one: he and Griffin have always been close to one another, so he was determined to do anything it took to help.

The procedure took place this past December over winter break. Griffin explained how much the transplant meant to him, saying, “For me, I’m getting something out of it and feeling a lot better from it.”

But in contrast, he felt that his brother might have had a harder time, remarking that, “being worried and such being harder on him,” referring to his brother, who, as he says, is undertaking “the selfless act of doing this–I’m receiving something but he’s getting a vital organ taken out of his body.”

Their recovery from the transplant has been smooth, and Griffin how much better he has been feeling since the surgery.

Despite the great toll one might expect from the procedures, Griffin refuses to let it get the better of him. For him, it can be a little hard at times to stay motivated with school work, with everything else weighing on his mind, but he pushes through to keep his grades up.

Beyond academics, Griffin is also a member of the Golf Team. Growing up, his main sport was hockey, but when he had the hip replacement procedure, he was informed that he would no longer be able to play hockey competitively. Although he could still play as a hockey as a hobby, Griffin decided to take up golf. What inspired this idea is the fact that his dad is in the golf business. Golf was something that he could do at a competitive level, and quickly found a passion for it.

Griffin and Bailey are in incredibly high spirits, and hold a positive outlook on the future. They commute to Denison from their Newark, Ohio home, which has given them the college lifestyle many students experience on the Hill, while also keeping their family close at all times. The two, along with their eldest brother, Christian, all share a profound sense of brotherhood, and the past near seven years have only reinforced their bond.