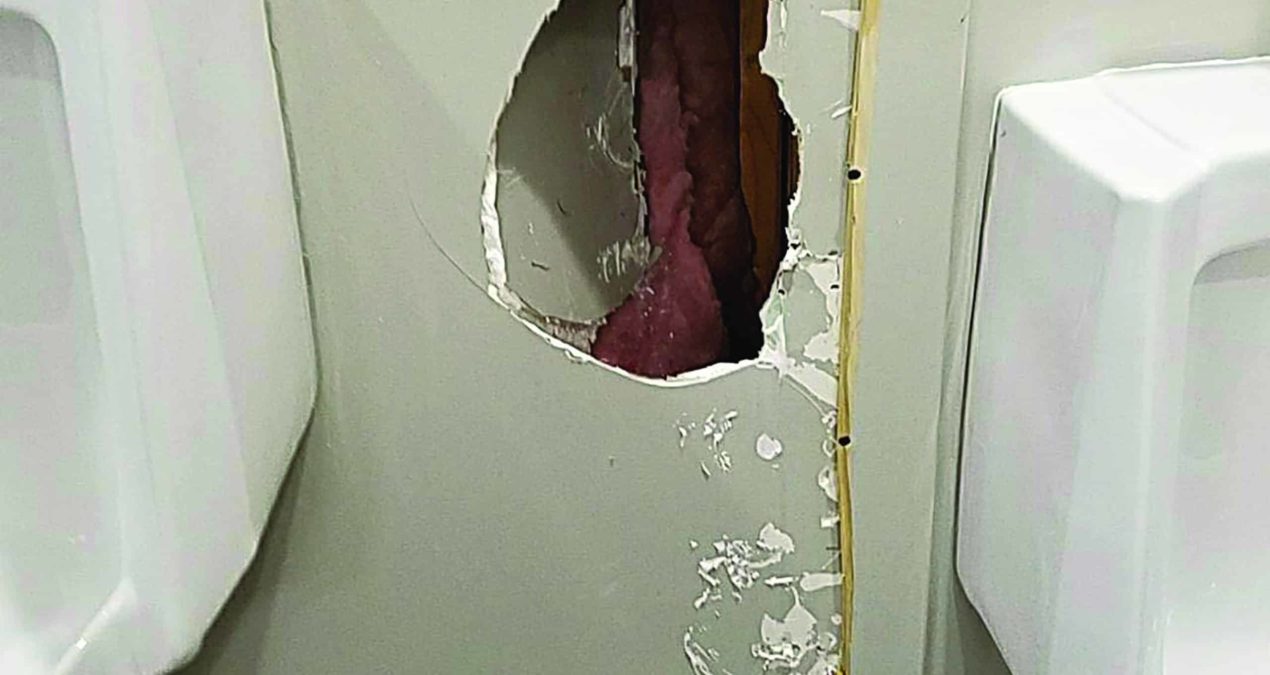 Revelors damage the Moonies during second weekend of parties

ALINA PANEK, Editor-in-Chief—The students are finally embracing and registering parties at the Moonies. Several parties have been registered for the first few weeks of the spring semester.

Moon Hall is a social lodge for students, set on the North Quad, formerly the Brownstone’s parking lot. The two large buildings with open layouts each can hold 75 to 150 students. The lodge was unveiled and open for party registration on Oct. 24 – 25, 2019.

The last weekend of January (Jan. 31- Feb. 2), Moonies partygoers created havoc for the building facilities and campus safety. Revelors tore the divider between the urinals off, and kicked a hole in the wall of the men’s restroom.

On Wednesday, Jan. 29 someone had taken the door off of the handicap stall in the men’s restroom.

“They left trash all over the place,” Christina Black, Building Services Assistant, said. “We’re not very happy with the way they treat them [social spaces]. What [students] they don’t realize is that there is no extra staff cleaning the social spaces, so we get it added to our already busy schedules. Most of the time, it takes at least two hours just to do basics in them. I’m not saying this as a complaint. I just think it may be helpful to know this. So when a person [Building Facilities staff] has a full schedule, and adds this, they’re basically cleaning social spaces for free.”

Campus Safety was unavailable to comment which parties were registered during the destruction.

Eric Smolker ‘21, member of the steering committee for the opening and design of Moon Hall, was dismayed to hear about the Moonies damage. “The damage was done to the ‘moonies’ when the new party space was not properly branded as an inclusive and integrative space, but instead branded as a reciprocal to the sunnies,” Smolker said.

The pattern of disrespecting social spaces has continued since the transition started two years ago. Administrators laid out their research and goals for the new spaces in a letter to the Denison community.

At the end of their letter, the points for the background for the plan moving forward for social spaces evidenced they had done their research by talking to students about their complaints about the senior apartment party environment. The first and most impactful point for students was that administrators understood that hosts (students hosting the parties) had “complained about their apartments being trashed by party-goers who forget that the apartments are also the hosts’ homes. Hosts bear the financial cost of the damages inflicted on their spaces by their guests.”

It is unknown how much damages have cost Denison in repairs, both at the Sunset apartment previously and the total for the new damages at Moon Hall.

Black hopes that the destruction will cease after parties are held responsible. “I love my job. [I] just don’t like when people use destruction to things that don’t belong to them,” she said.

Coby Strell ’21, a member of the Moon Hall’s steering committee and Red Corps team, was disappointed to hear about the damage to the Moonies. “I can’t speak for sure about why people are damaging the Moonies,” Strell said. “But I think it is important to respect the space that Denison has paid a lot of money to provide us. If people have problems with the Moonies they should let people know. Red Corps right now is working to improve the Moonies and would welcome and greatly appreciate any input people may have!”

After three hours, DCGA does not fund any proposals