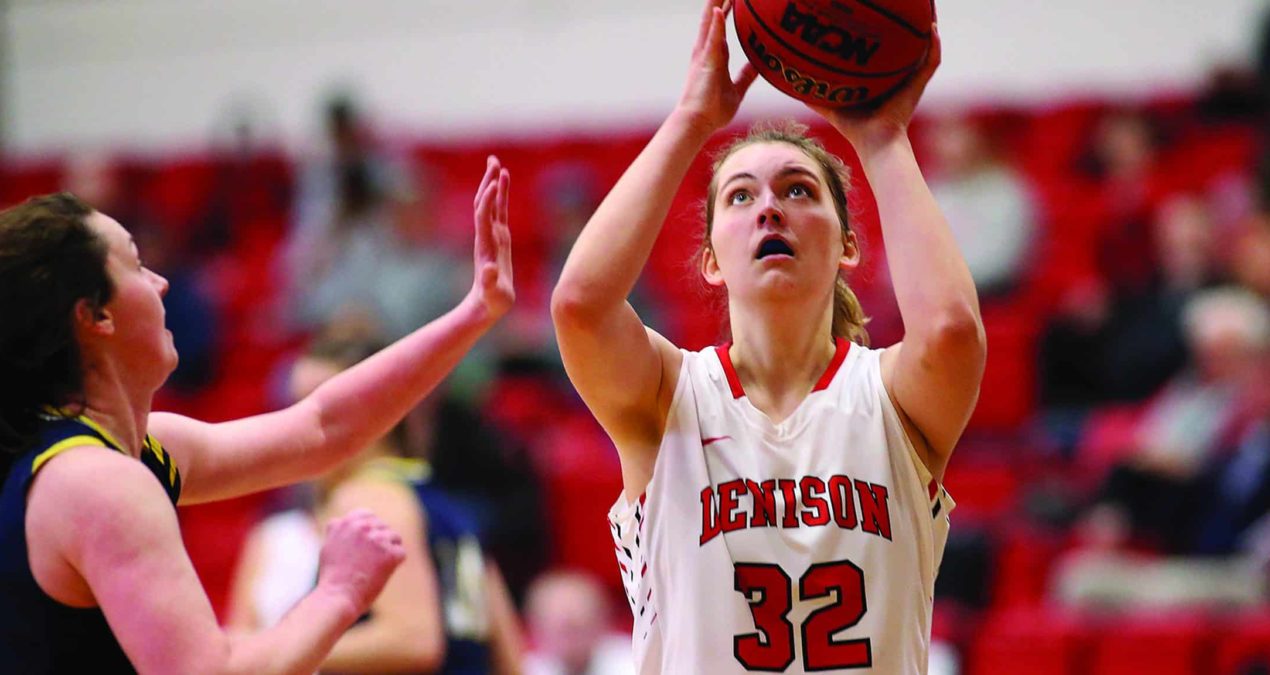 CORDERO ESTREMERA, Asst. Sports Editor—Denison University Women’s Basketball team exceeded expectations against Hiram, proving that they’re not only a good team but are on track to be an excellent team.

What makes this team unique are their genuine bonds and their dedication to the sport of basketball.

Zyah Beal ‘20 spoke on this: “DUWB is by far one of the best athletic programs at Denison. Not only because of our talents but we seriously have the best group of people anyone will ever meet…It’s fun to play on a team where everyone supports each other, and loves each other.”

Their previous game was a brutally fought loss against Wittenberg; however, the team didn’t dwell on this fact and instead continued to build upon the energy and success they had in that game.

A little over five minutes into the first quarter against Hiram the score was 11-11. Neither team was able to gain an advantage over the other.

Alison Schafer ‘20 sparked a 5-0 run by the Big Red with a completed jump shot over a defender. Denison began to minimize their mistakes on the defensive side of the ball too, often forcing their opponents into bad positions or using nearly all of the shot clock. During the tail end of the quarter the Big Red was especially stingy with the scoreboard, anchoring their success with their active hands-on defense and strong transition offense.

The Big Red played a zone defense that had an emphasis on help defense and switches. The team was playing with such high energy and focus that it extended to the crowd. Denison headed into the second quarter with a firm eight-point lead.

The Big Red maintained this energy and hustle mentality, which proved to be exciting basketball. Denison spent the quarter piling onto their lead. During the closing moments of the second quarter, Schafer launched a three-point shot with confidence and the crowd waited in anticipation as the ball traveled through the air. The entire crowd just felt it was going into the basket, but it rattled around the rim then out. This concluded the quarter and Denison held the game in their palms with a 17-point lead.

Yet, in the third quarter, their grip on the game only tightened. They continued their relentless onslaught on defense and it was unapologetic because they were having fun.

Beal explained what made this game enjoyable: “Every single person on our team gives a lot [energy]! From starters to people who don’t really get to play. Our bench doesn’t get enough credit, but we have the best bench in the NCAC. No matter what the situation is our bench is there to pick us up and give us energy, they are the hype-women of the team.” The crowd enjoyed themselves as well.

Denison held their largest lead of the game in the fourth quarter, leading by 29 points. This provided an opportunity for some of the lowerclassmen to play on the court. While the underclassmen played, the players on the bench continued to support and cheer on their teammates. One could easily see just how close this team truly is.

The entire team wore smiles as the game concluded 76-61 and it was a wonderful game to watch.

“I really enjoyed the atmosphere of the gym. We had a lot of great energy coming from our bench, players on the floor, and the crowd. The first quarter and a half the score was back-and-forth. Once we got on a run I remember looking up and the clock and all of a sudden we were up by 20.”
Support DUWB at their next home game against DePauw on February 19. It’ll be a treat.