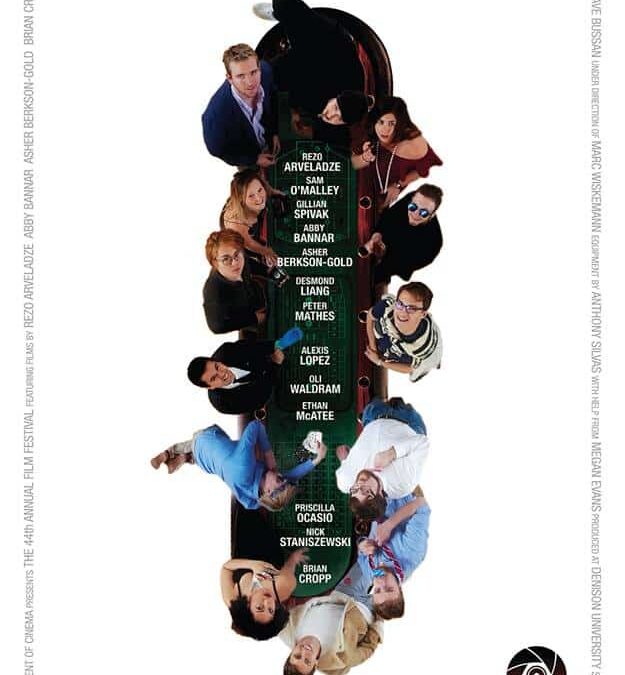 If you’ve ever walked through the Denison Cinema House, you’ll have noticed in the main hall, leading to the screening room on the right and editing suite on the left, the wall is lined with posters commemorating Denison film festivals of years past. A tradition dating back over 40 years to 1975, the Film Festival is a chance for the students of CINE-419, “Cinema Workshop” to screen films they have spent the past semester making and refining.

This semester the class had nine students, all but one of whom are seniors. With the transition to remote learning, and a resultant inability for the workshop students to access the department’s equipment and resources, production of the films has been canceled and the Workshop class has transitioned to a Film studies class, versus a production course as it had been previously. Naturally,  with this turn of events, disappointment abounded among the class’s students.

“I was looking forward to doing Workshop; I had kind of built up the courage to do it [this year] because it’s such an intimidating class,” said Joanna Klinedinst ‘20, a cinema and communication double major from Rockville, Maryland, who had intended to shoot a semi-autobiographical film about her relationship with her mother for Workshop. “[The cancellation is] really sad because it was such a personal project, but also it’s really sad because I wanted to do that to capstone my Senior year, and have a film to show for it.”

For Cinema Majors, the workshop often acts as a capstone to their Denison Cinema career, a chance to dedicate themselves to a single project and flex their creative muscles. The class is unusual in that the majority of work takes place outside of scheduled meetings, giving students freer reign with how they complete their projects.

“The whole class is based on this one film and all the work you do on the film is outside of class,” said Ethan McAtee ‘20, a cinema major from East Aurora, New York who is taking Workshop for the third time. “You have to write a script, you have to cast actors, you have to make schedules align which is impossible, you have to storyboard if you’re into that…then there’s shooting the film too, which is any number of days and nightmarish hours, and then editing the film.”

McAtee’s planned senior capstone project was going to be titled “The Forest of Ten Thousand Paths.”

“It was inspired and based on the first film I ever made called ‘Ryder’s Legacy’ and so the main character [of “Forest”], Helena Zaltho, she’s the daughter of the character I played [in “Ryder’s Legacy”] 10 years ago because I thought that would be cool, it was my first film and here’s my last college film, how cool would it be to book-end my cinema career, or this chapter of it, with the same world, the same family.”

However, both admitted that the swell of emotions when they first realized they wouldn’t complete their films was mixed.

“It’s so much planning and stuff that I was a little bit relieved to a certain extent that I wouldn’t have to worry about all that stuff,” said Klinedinst. “I feel like I thought in my head “I’m never actually gonna do it” and that’s what I loved so much about cinema: in the production classes, it would seem like such an insurmountable obstacle, “how am I ever gonna do this?” So I almost knew it was never gonna work out, that’s so sad to say but [I feel like] something had to go wrong.”

McAtee concurred, “The very first emotion [I felt] was relief. I was really behind on getting done what needed to get done and the thought of coming back from Spring Break and having to shoot a 12-page fantasy film in a month was not a great one. Then I started thinking, you know this whole class hinges around making a film and working towards this film festival, so what’s the point of it now? My senior year film festival, the culmination of four years of work, down the drain. So now it’s just sadness, but it was relief at first.”

When asked if they might attempt to complete their films independently in the future, there was uncertainty. “I think [I’ll revisit it],” McAtee said, “the cast is small enough that I could pull some people together and go out in the woods with a camera like I did years and years and years ago. When that’ll be, I don’t know.” Klinedinst further noted, “The nice thing about being in the Denison program is that everything is there for you, so you don’t need to buy a camera or buy lights or anything, so maybe, but I don’t know what equipment I’ll have access to in the future.”

The Denisonian reached out to Cinema Department Chair and Workshop instructor Marc Wiskemann, but he had no comment at this time.