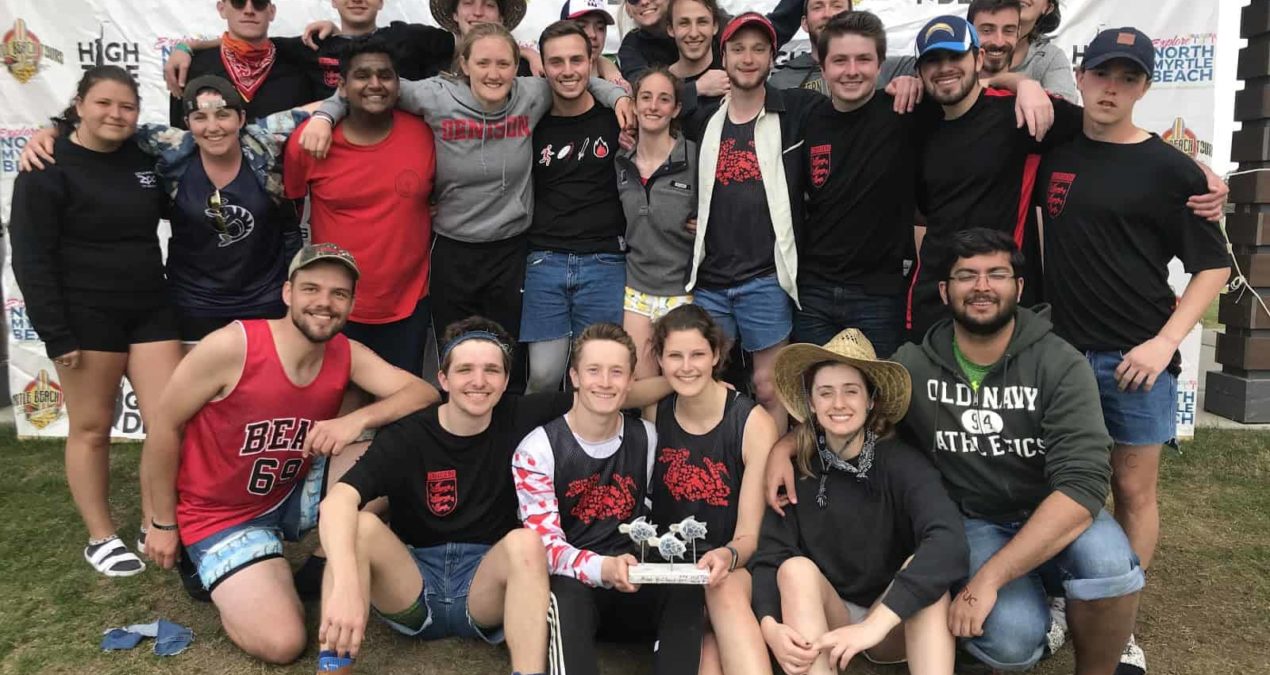 By Ian Decker ’19, special to the Denisonian —

Between watching the virtual graduation ceremony of the class of 2020 and seeing proud families of Denison grads post heartfelt messages on Facebook, I was reminded of what my time on The Hill meant to me. Each day that passes makes me miss the friendships more, a nostalgia that is compounded by the current climate we are living. Over the course of my time in Granville, the group that provided the fondest memories was the Denison Ultimate Frisbee Club (DUFC). Ultimate Frisbee mixes elements of basketball, football, and soccer to create a completely hybrid sport. Each team has seven players on the field, and the goal is to work the disc down the field and score in the opposing team’s endzone. Four years of silly moments, laughter, and hard work culminated in a championship win at High Tide 2019, March 19-21, the largest college spring break ultimate frisbee tournament in the world, an annual event the team participates in.

The first place finish in the Mixed B division, which was for co-ed teams that wanted to play hard and compete, but also have a positive experience bonding with other teams, at High Tide 2019 showcased not only the talent of  Denison, but highlighted the warmth of the 27-person group. On the third and final day of play, the team faced off against Hobart and William Smith, Allegheny, and Fordham. With a squad made up of alumni, current frisbee players, and several friends, this eclectic group showcased what makes this team so special.

Denison began their road to the championship with a matchup against Hobart and William Smith. What started out as a back and forth contest – both teams scored two points each – ended in a 13-6 win for Denison. Sparked by the energy and offensive punch of four-year standout Asher Berkson-Gold ’19, Denison was able to advance to the semifinals.

“Beating Hobart felt incredibly satisfying. I remember scoring once or twice early, and once towards the end of the game” said Berkson-Gold, who was considering Hobart for college. “It felt really good to play quality Ultimate against a team that I might’ve ended up playing for. Most importantly, it made me so proud to be on a team like [DUFC].”

The spirit that Denison displayed against Hobart and William Smith would carry into the second game versus Allegheny. After a similar start in which the teams traded scores, Denison, carried by “frisbee sensation” Mihai Fratian ’20 and his offensive skill, would end up winning the contest 13-4. In the first half, Fratian had three scores and finished the game with six.

“My speed is pretty key as well as my height and jumping ability, but just as important is being able to read the field and position myself,” Fratian said on what makes him such a dangerous offensive player. “Also having excellent teammates and handlers to throw to me is necessary,” emphasizing the fact that the wins in this tournament were team wins.

After defeating Allegheny, Denison would face Fordham in the final. While Denison were able to make it to this point in the tournament mostly unscathed, the Fordham bout had a different feel. Early in the first half, one of the Fordham players collided with a member of the Denison team, forcing that player to leave with a head injury. Later in the same half, another Denison member was injured at the hands of the same Fordham player. With tempers seeming to boil over, it was Fratian who stepped in.

“I told him that he needed to chill out and that ultimate isn’t a contact sport and that we’re all here to play for fun.”

The idea of having fun and supporting your teammates, which is the cornerstone of Ultimate, is deep rooted in the Denison team. “Having been on this team for all [my] years of college so far, I think of this team as a second family, and we watch out for each other both on and off the field,” said savvy handler Abigail Edminster ’21.

After both sides calmed down, Denison’s offense took over, and the team headed into halftime with a 7-2 lead. Essential to the positive environment of ultimate frisbee is the ethos connected to the spirit of the game.

“Remembering that community comes before competition, the main goal of club activities is to have fun,” said James Rau ‘22. “In ultimate, it correlates to staying in high spirits throughout the game, and not exacerbating conflicts.”

One of the players who contributed to the strong play of the Denison team was Dan Shapiro ’20, whose hat tournament team finished first place several days prior. A hat tournament is a one day event in which players have been randomly assigned to different teams, and is an opportunity to meet people and compete with a new group for a day.  “Winning the hat tournament was awesome!” Shapiro says. “I felt like I played better with all the extra attention on me.” The hat tournament win forced Shapiro to “put more pressure on myself to perform with [DUFC] because I played well with total strangers. If I could do that then how could I not play better with my teammates.”

Known for his high frisbee IQ and his ability to work hard on defense, Shapiro recorded several blocks and added a couple scores for the Denison team. “I played pretty inconsistently on offense at times but I remember having a nice catch in the end zone where I went up high and landed hard,” he said. “I was more proud of my defense though. I didn’t allow many strike cuts and no deep cuts.”

Even though games were to be played until 13, Fordham decided to throw in the towel at the half; the Denison spirit was simply too much, and Fordham just could not compete. More important than the win was the inextinguishable heart of the Denison team, which according to Rau, “manifests itself in the smiling faces, and good attitudes of our players on and off the field. Having a team that keeps the spirit of the game on their minds all the time is something to really be proud of.”

It’s much more than winning

On what winning with Denison meant to her, as team president and women’s captain, Blair Hamilton ‘19 says “Winning those three games was one of the biggest triumphs [DUFC] had seen in my time. No one went into that day thinking we might go undefeated,” she recalls. “But once we got our rhythm and our energy on the sideline we knew that was the day to leave it all on the field, and we did.”

While the team won the bracket, what is most memorable to the players is the fun they had as a group. “Most people do not want to come out to games purely for exercise, they come out for the people” Rau said. It’s about the laughter, the jokes, supporting each other with cheers from the sideline, galvanizing those on the field. For players like Berkson-Gold, in his last year, this win was extra sweet. “If you gotta go, go out on top. And that’s exactly what we did.”