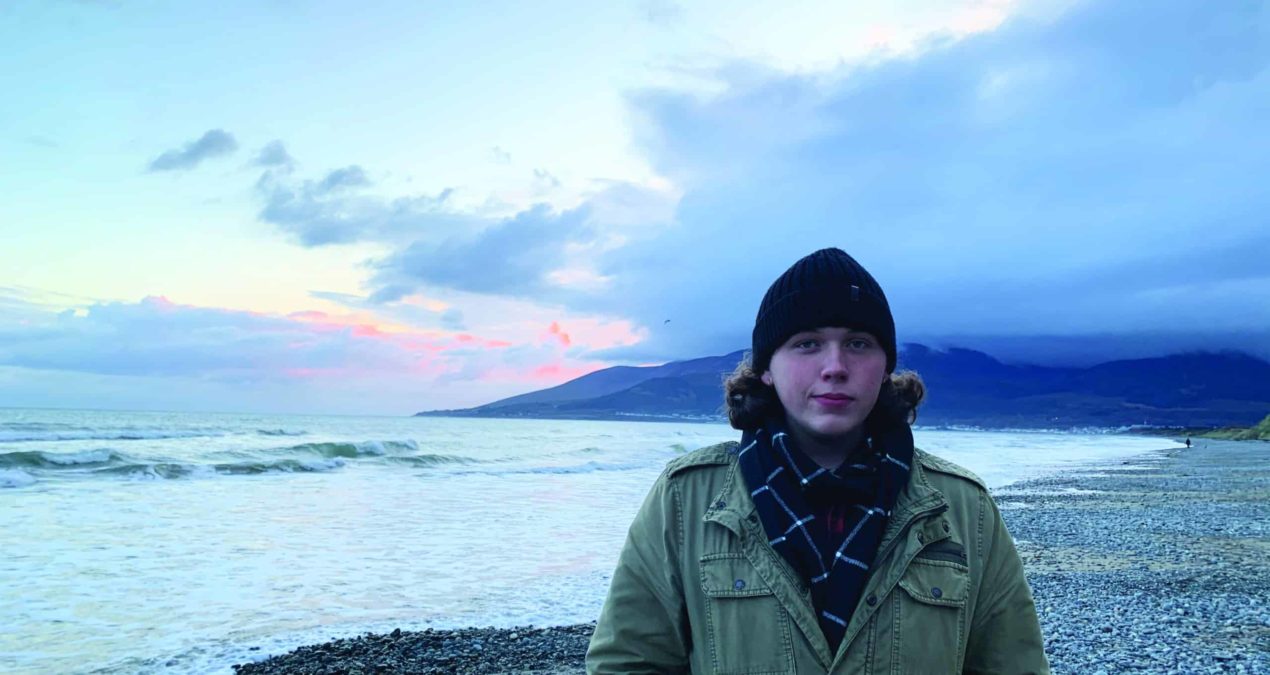 RAMSEY BRISTOL, Staff Writer—The overarching purpose of this piece is to provide a critique on Denison University Administration’s rationale for removing the Black Lives Matter (BLM) Banner and some further details surrounding the occurrence that may help in understanding the weight behind such a decision.

To recap, as stated in the September 30 article, “In June of this year, in response to the Black Lives Matter (BLM) protests breaking throughout the country, the Denison Studio Art Department created and subsequently displayed a Black Lives Matter banner. It was hung on the pillars of the upper balcony at the Bryant Arts Center in Granville, and remained on display until in-person classes started in mid-August when it was marked for removal by Denison’s Facilities Services…due to its violation of Denison’s policy on hanging banners/signage from campus buildings.”

The article also notes, “In justifying the policy, Alexandra Schimmer, Denison’s General Counsel and member of Senior Staff, offered examples of other universities with similar policies, such as the University of Michigan and John Carroll University.”

However, there have been numerous historical instances in which policies can be both archaic and in practice, and that policy often fluctuates and adapts with the changing times. For instance, segregation was a widely upheld policy for many secondary educational institutions, which has now been widely deemed destructive and unfounded.

In the same article “Schimmer also noted that administration attempted to work with the Studio Art department by giving them the okay to display the BLM banner in the Bryant Arts Center.”

That said, it would seem that the banner would receive far less viewership if not on display outside, since Bryant faces into Granville and COVID-19 restrictions mean that there are no large scale events in the Bryant Arts building this semester, as well as restrictions on outside visitors in Bryant. Further, by being inside, the BLM banner would not serve to show students who do not regularly frequent Bryant that the Studio Art department is sending out a message that Bryant is an inclusive space for the many students that attend Denison.

Below are excerpts from the September 30th article that highlight the rationale behind the administration’s decision to remove the BLM banner—all are followed by critiques.

“One, that the hanging of signage from academic buildings is a safety and liability concern.”

The displaying of the BLM banner, however, was done so from the constraints of the Bryant Arts Center balcony, which brings into question how unsafe the process could have been. Further, the removal of the BLM banner was a reactive decision instead of a proactive one, which means that any possibility of injury had already ceased.

“Second, opening up the door and allowing exemptions to Denison’s policy to allow the BLM banner would also mean opening the floodgates for more heinous signage, such as white power symbols or swastikas.”

The distinction between symbols of expression and solidarity with progressive social movements and those defined as hate symbols is an important one. Is it possible for an educational institution to allow the display of certain symbols/messages while simultaneously banning the use of hate symbols?

Well, there seems to be a precedence for such actions, as was the case when Oregon’s state board of education banned hate symbols, including the Confederate flag, from the state’s approximately 1,200 public school buildings. In a September 2020 article by Rob Manning, a news editor at Oregon Public Broadcasting, “The new policy, enshrined through a temporary rule called ‘All Students Belong,’ also prohibits swastikas and nooses. ‘The noose, Confederate flag and swastika are being used to bully and harm students and staff, and this is particularly true for students of color,’ said Oregon Department of Education Director Colt Gill in a statement after the rule was approved. ‘Students must feel like they are safe and belong in their own schools if they are to learn, work and grow to their fullest potential.’”

“Third, that tax exempt bonds which fund much of Denison’s capital projects, like academic buildings, stipulate that such buildings are to be used for the mission of the organization being funded, which in this case is the university specifically.”

However, one could argue that the BLM banner and the pride flag, fit well into the mission of the university, considering that Denison has departments in Black Studies, Queer studies, Women’s and Gender Studies, as well as a newly conveying anti-racism task force and in the words of President Weinberg’s June 1 statement to the Denison community after the murder of George Floyd at the hands of the police: “Society changes when we think and act differently. I believe our nation’s college campuses are crucial to this process. We have to do more to step into this space. Our campuses need to be places where we are confronting our past, learning about the structures that shape contemporary society, and finding ways to work together to create a better future.”

Yes, colleges are crucial to this process. Yes, colleges should be confronting their often ugly pasts. Yes, we must agree to work together to envision a better future and turn that vision into reality. However, by removing the BLM banner and pride flag, the administration has failed to do any one of these things. If anything, there is more possibility for harm in these actions than any good. This is especially relevant to Denison, considering its history of having the posters of C3 Organizations and multicultural events torn down or desecrated on campus.

According to an April 20, 2019 article published by The Denisonian titled “Poster Ripping Continuously Targets C3 Organizations and Multicultural Events,” “In the past two weeks, several multicultural organizations have experienced vandalism to their event advertisement posters in the Slayter elevator. The following examples are only some of the cases that have contributed to a history of poster vandalism on Denison’s campus.” Another article published by The Denisonian on September 24, 2019 titled “A Resurgence of C3 Organization Poster Vandalism Calls For Action” makes evident that this is a continuous pattern of Denison’s campus. That is why the displaying of the BLM banner and pride flag come at such an important time, when more than ever, our campus and society need a symbolic gesture, followed by action, that states these types of signage have a place on our campus, are valid and serve a greater purpose. At a time, when the administration could have affirmed such a notion by allowing the display of the BLM banner and pride flag on a public building with wide viewership, they instead opted to follow policy and remove such signage. I implore administration, regardless of their rationale, to question what kind of message they are sending out to their students.

Further, as explained in the September 30 article, “When contacted by The Denisonian, the administration proposed how to frame the issue. As suggested by Dr. Coplin, “Rather than think about this as “two sides,” can I suggest a different framing? There are really two different questions. What are the college’s policies about free speech? And what is the college doing to support diversity and antiracism work?… Further, Schimmer suggested framing this as a discussion of free speech in the public sphere and how allowing one form of free speech in a public area sets a precedent of allowing all forms of free speech, including ones we might not find acceptable.”

Perhaps an even better way to frame this story is to juxtapose the occurrences documented, and the responses to them, amidst Denison’s mission statement: “Our purpose is to inspire and educate our students to become autonomous thinkers, discerning moral agents and active citizens of a democratic society. Through an emphasis on active learning, we engage students in the liberal arts, which fosters self-determination and demonstrates the transformative power of education. We envision our students’ lives as based upon rational choice, a firm belief in human dignity and compassion unlimited by cultural, racial, sexual, religious or economic barriers, and directed toward an engagement with the central issues of our time.”

Schimmer stated that one of the benefits of policy is that decisions don’t have to be made. This seems perplexing in regards to the supposed mission of the university. It begs some particular questions: Does unison policy allow for autonomous thinkers, discerning moral agents and active citizens? Would it be more appropriate to pose to the community what signage should be allowed to hang from academic buildings—to allow for self-determination, community consensus, and rational choice?

If we find ourselves in situations where hate symbols are hung from buildings or proposed for display—are we not equipped to rationalize their removal and to condemn their motives? If not, are we truly working towards “a firm belief in human dignity and compassion unlimited by cultural, racial, sexual, religious or economic barriers, and directed toward an engagement with the central issues of our time.” If we are unable to keep symbols of hate off our campus under a policy of allowing banners/signage to hang from our campus buildings, when do we question what kind of students are being permitted to attend Denison and how affective our anti-racist work truly is?

In contemplating such questions, it might be helpful to reflect on a portion of the statement offered by the Studio Art department when displaying the BLM banner: “To our White students, faculty, staff and community members, we call on you to join us in speaking out against this violence. Hold those in positions of power to account for real change; change that has been demanded by Black folks for years, decades and centuries.”

Textbook trials and tribulations: There needs to be a better way