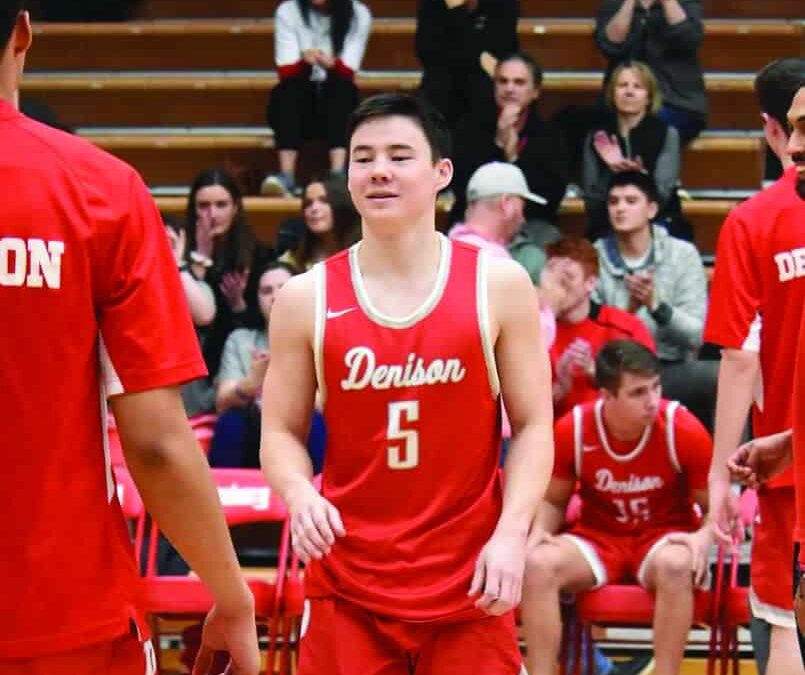 Sports Feature: Kevin Cheng ‘22, stepping up as a junior

JOANNE LEE, Sports Editor—Kevin Cheng ‘22 has been playing basketball for as long as he can remember.

“I have three older brothers so I used to play with them all the time in our driveway. It’s something that my siblings and I all love and have grown up with and are really passionate about. I wanted to follow in their footsteps, and I remember going to clinics and camps from preschool as well”

Basketball runs in the family, as his older brother, John, also played for Denison and graduated back in 2016, now working as a college basketball coach at University of Chicago.

Cheng is a Guard on the team, and an accomplished player who has started nearly every game as a Freshman and Sophomore already.

His Coach Sully had nothing but praise, describing him as a “relentless competitor and arguably the most focused individual in our program.

Because of that, he has improved both his skill-set and leadership capabilities each year.

Kevin was a role player and great teammate his freshman year who grew into a year-long starter, impact player, and leader by example last year. This season we will look for Kevin to step up as a vocal leader now that he has a wealth of in-game experience and his teammates are well aware of how hard he works and the passion he brings to the floor every day.”

To Cheng, being a leader is not just leading by example but being a vocal leader. “I’m never going to ask a guy to do something that I’m not doing myself and it’s being the loudest voice in the room sometimes, willing to talk and speak up and say the hard things when others aren’t.

It’s telling a guy when he’s doing something that may be negatively affecting the team. Sometimes, I have to say things that aren’t always the most positive, but recognize that it’s for the team and for the good of making someone better. At the end of the day, I want to lift my teammates up and speak up when I need to, no matter the circumstances.”

Coach Sully and the rest of the staff, Coach Ghiloni and Hartenstein teach the team about selflessness and character – to take pride in their accomplishments and in growing and becoming a better person overall.

“A quote that we always live by is to become selfless educated men of character and action. It’s something that I’m learning still and growing in everyday”
When Cheng was looking at schools in high school, he knew that if he had the opportunity to play basketball in college, he would take it.

Denison had already been on his radar through his brother who he described as being “a little immature” when he left highschool, but saw how he really matured as a person when he went to college and a big part of that was through the basketball program.

“When I visited, I saw how the team culture was head and shoulders above everyone else, and how they emphasized becoming a better person while pushing us to the best basketball player I could be, which really drew me to this program”

At Denison, balancing basketball and academics was initially quite an adjustment because basketball was a much bigger commitment than it had been in high school with lifts, team meetings and practices.

“I had to deliberately find time every day to look through my schedule and find time to go to the library or cut back on other things like playing video games or hanging out with friends, using my time as efficiently as possible. I was still able to bond with my teammates, through team study tables, which were really helpful for me in the beginning and helped me stay disciplined in my schoolwork.”

Although being on a team is extremely busy, it has taught Cheng of transferable skills that he has been able to apply while at Denison as well.

“As a player and leader on the floor, I’m always aware of how my actions affect the people around me – my teammates, which translates when working in groups at Denison to be self aware and selfless, doing things for the benefit of the entire community, not just myself. In basketball, I’ve always been told the importance of finishing things through and not quitting halfway.

Even in academics and life, I try to apply this discipline and commitment even if I may not necessarily be as passionate about it like I am with basketball.”

Last summer, Cheng interned for a wealth management company and spent this recent summer virtually interning for a political consulting company based in Chicago. This recent experience has sparked his interest in learning more about this political side of things, particularly consulting or lobbying which he hopes to explore further with another internship this upcoming summer.

Although Covid had affected his internship and spring/summer season which is a time to make the biggest leaps in skills, Cheng was able to focus on the positive aspects.
“I found ways to be as productive as possible, working out with my brother in the basement or finding a career path I am interested in, learning to not make excuses to be disciplined and committed to constantly growing.”