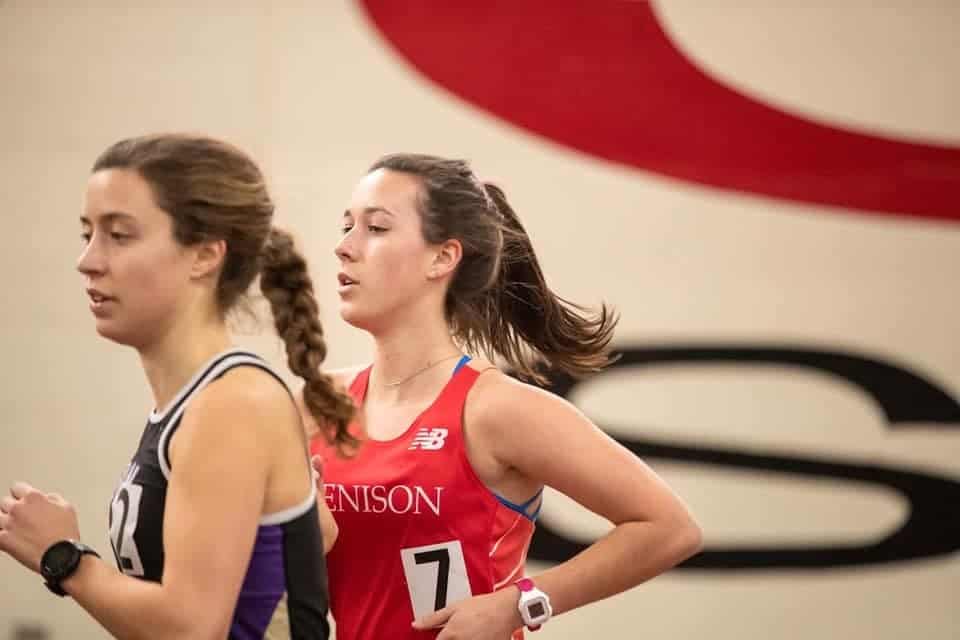 She knew that she wanted to continue pursuing running in college, and found that “it made sense to also do track because in order to do cross country, you also have to do track as an all year sport.” She enjoys both, but certainly has a closer affinity with cross country, as it is something that Radziewicz has been doing for much longer and she enjoys “being able to see the outside scenery with cross country instead of running around a track.”

She is a biology major, chemistry minor currently on the Premed track and keeps herself busy when she is not running on the tracks, outside, or lifting in her various extracurricular activities. She is the president of the biological society, member of the Denison Inclusion Group, Mortar Board, and a member of the Pi Beta Phi sorority.
Although it is definitely a big time commitment and requires conscious time management to stay on top of her work, Radziewicz spoke on how it taught her about being consistent and developing grit. As a freshman, she had struggled with anemia and spoke on her challenge of “not comparing myself to other people and not let things get to my head too much.”

“I also came into college doing cross country so although it was a time commitment, it’s been such a big part of my life, so I don’t really know what it would be like to not do a sport.”

As Captain, Radziewicz described the struggle with staying connected since there were so many new freshmen on the team and underclassmen heavy. “I know that as team captain, I’m supposed to be so happy and positive about everything, but it does suck because this was supposed to be my senior year.” She tries not to dwell on it too much though, and is extremely proud of the way she finished her last meet with a personal best time, beating her time from high school and was also one of the top scorers for her team as well. “It was a really good way to end my running career in college, so I’m definitely proud of that.”

As captain, the team has found ways to stay connected through Fun Fridays where the team can do something not running related, team dinners, and various intersquad meets and virtual meets to keep motivation levels up and keep a sense of competitiveness. “We had a time trial at the beginning of the season and intersquad meets with the men’s team as well. We also had a virtual meet where we ran 5k on the bike path Coach Fitz (Head Coach Mark Fitzpatrick) would time us and compare against Wooster who did the same.”

After Denison, Radziewicz hopes to attend medical school and is waiting to hear back from the schools that she applied to over the summer. If she doesn’t get in, she hopes to spend a gap year doing research or volunteering, and is excited for whatever she ends up doing. As she reflects on the end of her running career at Denison, “the great thing about running is that you can do it completely on your own, anywhere, so it definitely won’t stop when I graduate. I am someone that always likes to have things to work towards, so I’m planning on running a marathon post college, and will always have the friendships and memories that I’ve made during my time at Denison.