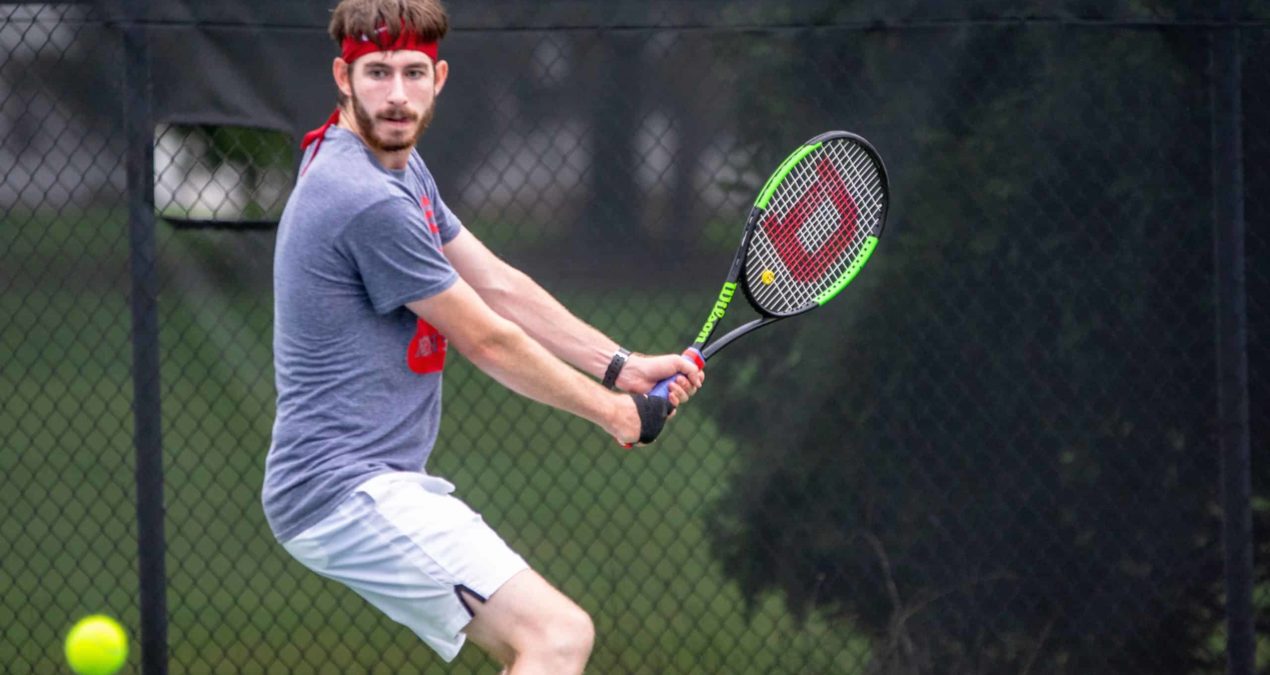 JOANNE LEE, Sports Editor—For Jacob Dennen ‘21, political science major and Spanish minor, playing tennis in a college was almost a natural culmination of all the work and effort that he had put into the sport from the age twelve when he really started playing competitively.

His coach, David Schilling, described Dennen as “a talented player, with a great deal of experience that will be invaluable as we proceed with the season” on the court but his strength goes beyond to his incredible asset to the program as a whole, and “a valued sounding board for [the coach] personally on the team, the players, and the program as a whole.”

However, his tennis journey has not been without its fair share of struggles, as he came very close to quitting during his sophomore year. Although it was a culmination of many different factors, one of his factors was related to his frustration with the team culture and lack of camaraderie.

“To me, our team felt more like a group of guys who just played tennis together than like an actual team. Moreover, it felt like a lot of the guys on the team just didn’t really care. As a result, I took it upon myself to try to fix some of these issues. Unfortunately, it backfired and caused me to be alienated from the upperclassmen.

This forced me to reevaluate how much Denison tennis really meant to me and whether it was really worth the effort. Eventually, I was able to realize that it was worth the effort and I decided that from then on I wouldn’t stop trying to change the team culture and build more camaraderie. Looking back on it though, I now realize that it was not my place to do this. Unfortunately, there are times where you have to just sit back and follow and wait for your opportunity or time to lead.”

Right now, he is a captain of the team along with his teammate, Timmy Cianciola ‘22, and during the last season and a half, he has done wonders in building a more tight-knit team and improving the team spirit. Today, he can confidently say that he has never been on a more close-knit team and has worked closely with the new coach, David Schilling, on building a stronger culture.

His coach spoke on his strengths as a great leader and incredibly thoughtful young man, that is a very analytical thinker. “He understands what needs to be done and how to get things accomplished. He does a great job communicating with the guys, building an inclusive atmosphere and helping the young players in any way he can.”

To Dennen ‘21, being a leader is all about setting the tone and culture for the team, leading by example and being vocal. He takes it upon himself and Cianciola ‘22, the other captain to come up with a system of expectations and guidelines for the team while making sure they are clearly communicated to the rest of the team.

Although he does not know what his future plans after Denison looks like, he is doing his senior research for political science on antisemitism and wants to work for a company or an NGO conducting research on antisemitism. He is also planning on going to graduate school within the next five years to get either a PhD or master’s degree in political science.

Dennen ‘21 has helped the team make incredible progress in creating a strong culture and a tight knit bond as a team and his coach credits him as “the glue that holds the team together” and considers himself “very lucky to come into a situation with such a strong leader willing to take on the responsibilities that come with being a captain.”