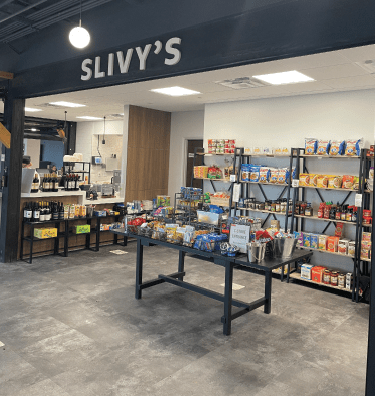 HOPE CHERUBINI, Special to The Denisonian—In 1975, when he was 8 years old, Jonathan Silverstein’s parents signed him up to play junior pee wee football in his hometown of Wellesley, Massachusetts.  At that age, getting a personalized uniform jersey was one of the highlights of the season, and for some kids, one of the only reasons to participate.

At the start of practice one day, early in the season, the players waited anxiously as the coach handed out the uniforms.  Coach yelled out each players’ last name and the boys would run up to grab their jerseys.

When it was Jonathan’s turn, Coach yelled out “SLIVERstein” and Jonathan quickly corrected him.  “It’s SILVERstein, Coach, not SLIVERstein.”  Coach replied, “not this season” turning his jersey around to show Jonathan the name printed on the back.

From that point on, Jonathan was known as “Slivy” a nickname that stuck throughout his childhood and teen years, both on the playing field and in the classroom.

The nickname followed Jonathan to Denison, as two of his high school classmates joined him in Granville.

To this day, Denison classmates and Kappa Sigma fraternity brothers call Jonathan Sliv or Slivy, and one even named a family pet after him.  Jonathan was so widely known as Slivy that many classmates were surprised to learn that his last name was, in fact, Silverstein.

Hope Cherubini, Denison class of 2021, is the daughter of one of Jonathan’s fraternity brothers and dear friends from Denison.  She has called Jonathan Uncle Slivy since she was a toddler.

After the café and market opened on the first floor of Silverstein Hall, Hope suggested to President Weinberg that the space be renamed “Slivy’s.

She thought Slivy’s would be the perfect name for the new space because it would be a great way to honor Jonathan for all he has done for Denison and its students.

From now on, Slivy’s will serve as a permanent reminder of the life-long friendships created at Denison and our community of support and care for one another.”