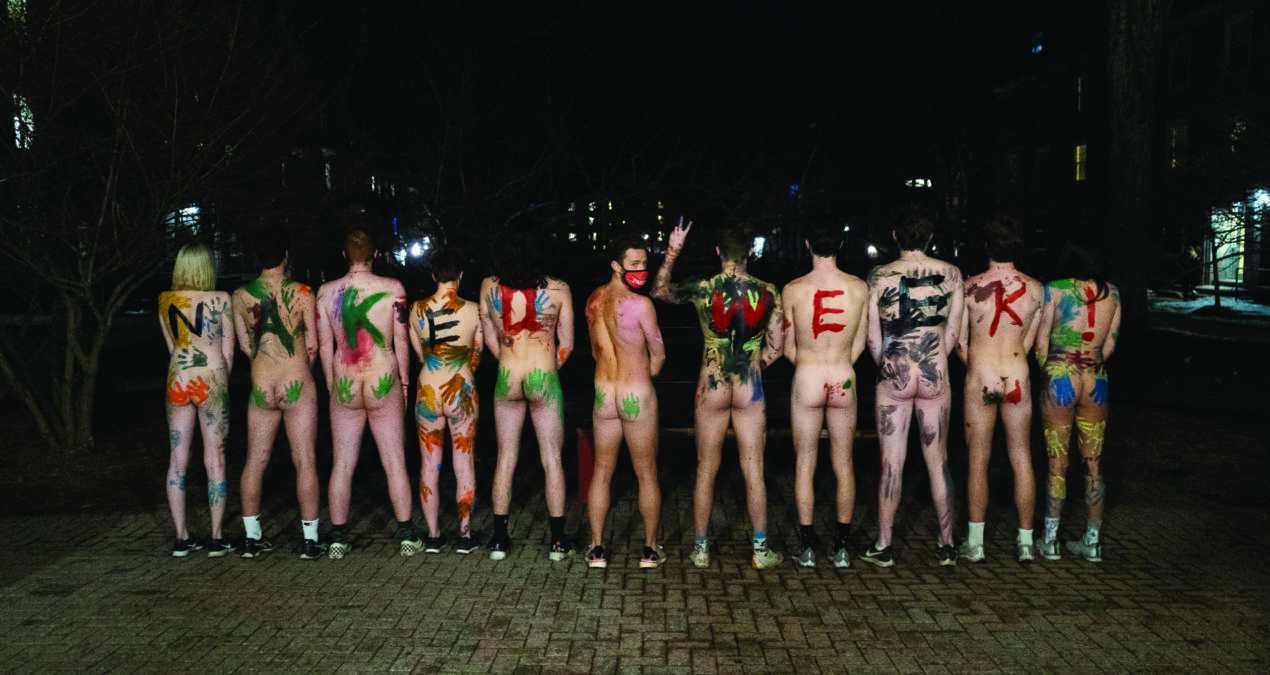 The “Naked King” explains the meaning of Naked Week

OLIVIA HARVEY, Features Editor— This past Monday marked the beginning of a long-standing Denison tradition: Naked Week. Participants readied at the steps of the library and took off across the snow-covered Academic Quad, flanked by crowds of onlookers. The week was led, as usual, by a Naked King or Queen, and the 2021 title fell to Zackary Johnston ‘22. Explaining the significance behind the tradition, Johnston insists that “Naked Week is not just taking off your clothes and streaking.” Rather, “it represents love, acceptance, caring for one another, and compassion.”

Johnston is a financial economics major and dance minor from Washington, PA, and has been running in Naked Week since his freshman year. He was inspired by the then-Head Community Advisor, who was also Naked Queen of the year, advertising the event by putting up posters in Johnston’s residence hall.

“I was extremely hesitant at first and I did not know what to do,” Johnston remembered. “I always struggled with body image for myself and thought that it would be a great outlet for me.” He decided to go to the opening ceremony, and ended up being the only freshman represented. But instead of feeling shy, the others in the group reached out and made him feel welcome. Ultimately, “by the end of the run, I was so happy that I was the one running naked and not just watching. Ever since then I have done each run since my freshman year, and do not regret one step.”

A Naked King or Queen is appointed annually by the previous senior King or Queen at the conclusion of the week’s festivities. Since there was not a junior who was interested in the role, the crown was passed to then-sophomore Johnston. His role as “Naked King” involves the organization and facilitation of all runs, with the help of the Naked Court, a group of students that commit to helping with any needs and are at every run. Johnston was tasked with marketing the schedule and leading each run with the group that decides to be there for that specific run.

The events this year look a bit different than those of the past, due to community guidelines regarding the current health situation. As this year’s title suggests, those taking part in the run removed “everything but the mask,” and rather than gathering indoors to undress, runners met outside near the starting point. In the case that more than 30 students showed up, organizers split up into groups.

Additionally, the themes had to be altered, as the use of body painting was restricted. Themes for the runs instead utilized colorful socks, scarves, holiday apparel, and rainbows for pride. The group was still able to do splatter paint for the last night, but following the COVID-19 guidelines and social distancing.

In reflecting on his past participation and time serving as King, Johnston feels, “I would not be the same person I am today without Naked Week, and I am so grateful. Each person I speak to about Naked Week tells me that they regret not doing more runs in the past. There is so much positivity on this campus when it comes to this week and I am so happy that I can be a part of it.”