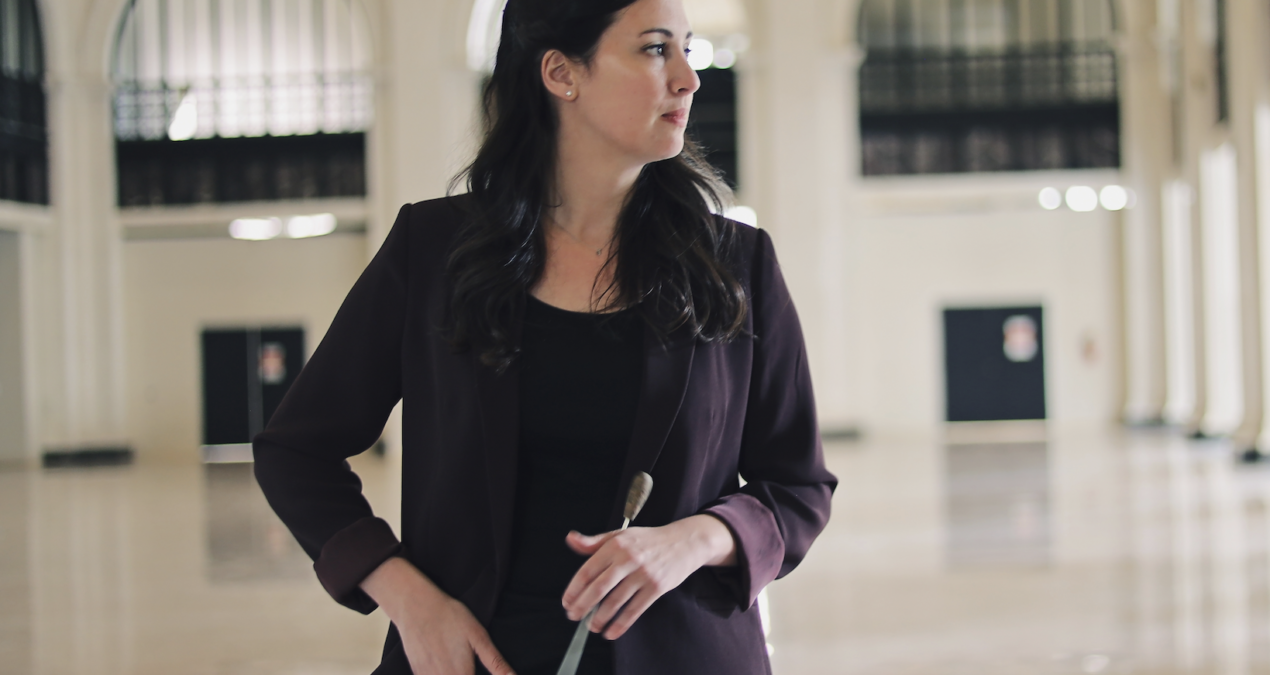 EMMA PROE, Features Editor—Few people are quick to draw parallels between a nuclear reactor and Mahler’s Second Symphony, but to visiting professor Dr. Chelsea Gallo it’s only natural: the intense knowledge of skill, collaboration, creativity and attention to detail are all too similar. Gallo currently works simultaneously as a Staff Conductor for the Detroit Symphony Orchestra and Conductor of the Denison Orchestra Ensemble. All the while, she continues to draw connections between the world of music and the sciences.

Music was not always the plan for Dr. Gallo. While she started playing the violin and piano from the age of four, she always envisioned going to college for softball and studying to become a math teacher. However, everything changed when she tore her ACL. In need of a scholarship to replace her athletic one, she reached out to her undergraduate university to apply for a music scholarship.

While in college, she fell in love with music. Gallo elaborated, “I realized just how much happiness was involved in music-making. It was just so fun and creative and now I’ve found this really lovely harmony between the sciences and the arts when it comes to creativity.”

Towards the end of her Bachelor’s program, the conductor of her orchestra reached out to her about conducting, which she had never previously considered. Deciding it sounded right for her, she went to Vienna, Austria to attain her master’s.

Gallo thrived, playing softball for the local pro team and performing in the Cosmos Chamber Orchestra. The group was the recording ensemble for NASA and Lockheed Martin, as well as the premiere recording ensemble for the Hubble Telescope 25th anniversary celebration. Recordings of the group’s music was even sent into space on the Orion EFT-1 Mission.

While in Vienna she met the conductor of the University of Michigan’s orchestra, who guided her to her doctorate work there. It was during her doctorate program that she met Leonard Slatkin, conductor of the DSO, who offered her a week of covering conducting. Her work impressed, and now she does what she loves.

Gallo continues to take on exciting projects blending music and science, her most recent performance at the University of Michigan on March 6th: a concert and lecture for the nuclear engineering department.

The purpose of the concert was to draw parallels between the nuclear field and classical music. Gallo explained, “There’s this attention to detail, this care for those being creative with you, and understanding what’s the main goal and how we can get together to achieve that.” When asked what she believed was the biggest connection between music and the sciences, she quickly answered, “Collaboration. Nothing has ever happened without the help of someone else.”

Gallo expressed her excitement for conducting the concert, noting “I want to do this concert because I myself find great joy in the creativity required in multiple fields. I want people to attend classical music concerts and be able to find in it something they relate to.”

She hopes this will foster a wide-spread appreciation for the arts, allowing people to understand how music is important and has value in everyone’s lives.

Gallo also has many passions beyond music. While listing her interests, she exclaimed, “I have so many loves, I wish I had 48 hours in a day!” She finds excitement in learning new languages, currently picking up French and Catalan. She also stays active with running, yoga, and sports in general. Looking forward to traveling again and eating lots of food, there’s certainly no shortage of diversity in her interests.

Gallo is extremely excited to be working with Denison this semester, and her favorite moment so far has been the Third Coast Percussion residency. She’s also looking forward to upcoming concerts with Orchestra Ensemble.

Gallo’s belief in the ties between music and the sciences cannot be understated. According to her, “It’s this special meeting place, it’s what drives creativity forward.” It is only a short matter of time before Dr. Gallo finds new ways to marry music and the sciences; the only question is what’s next?