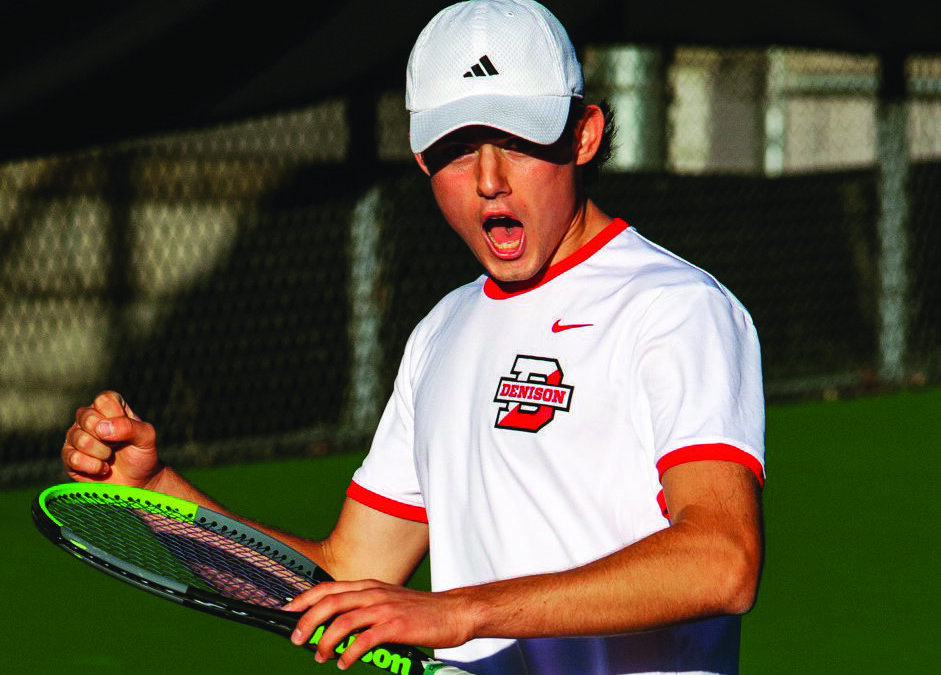 AARON SKUBBY, Editor-in-Chief—Denison’s Men’s Tennis team didn’t lose a single set in their 9-0 win over DePauw University on March 27, securing their first win of the season in a home opener that served as the first home performance for several freshman players.

Jacob Dennen ‘21, who is a captain of the team, expressed happiness over the win. “Getting a 9-0 win against DePauw, a big conference rival of ours, was huge. Last weekend we had a tough loss to Case Western and we knew that we needed to bounce back in a big way and I felt like we did that.”

Throughout the games, the air was filled with the sound of players cheering each other on after every point. The team was welcomed by friends, family members and fellow athletes on the sidelines, including members of the Women’s Tennis team, who began their season with a sweep of their own over Ohio Wesleyan University on March 21.

“From the first point of doubles to the last point of singles, we fought hard and pumped each other up,” Dennen said. “Obviously getting a win is great, but the best part was getting to see Andy, Milly (Milan Golena), and Deem (Nadeem Jones) getting their first collegiate wins. They each showed how mentally tough they really are. Deem didn’t even know he was playing singles until five minutes before the match started and neither Milly nor Andy played their best. Despite this, they each showed maturity and resiliency that you don’t see very often in freshman,” he continued.

Both Mackler and Golena played in a difficult game against Case Western, which is ranked in the top 10 teams. For Jones, it was his first appearance in a match. Jones won his first set in a close competition with a final score of 6-4. His second set, however, was a convincing 6-0 win.

“In the beginning I was extremely nervous. As a freshman, it was my first time playing at home with fans watching and we were also looking to get our first team win of the season so I started a little slow,” Jones said. “But as the match went on and my teammates and coaches pumped me up, I felt more confident in my swings and was able to shut my opponent out,” he said.

Their next game is at Ohio Wesleyan University on March 31. After that, they will face Wooster at home on Saturday, April 3.