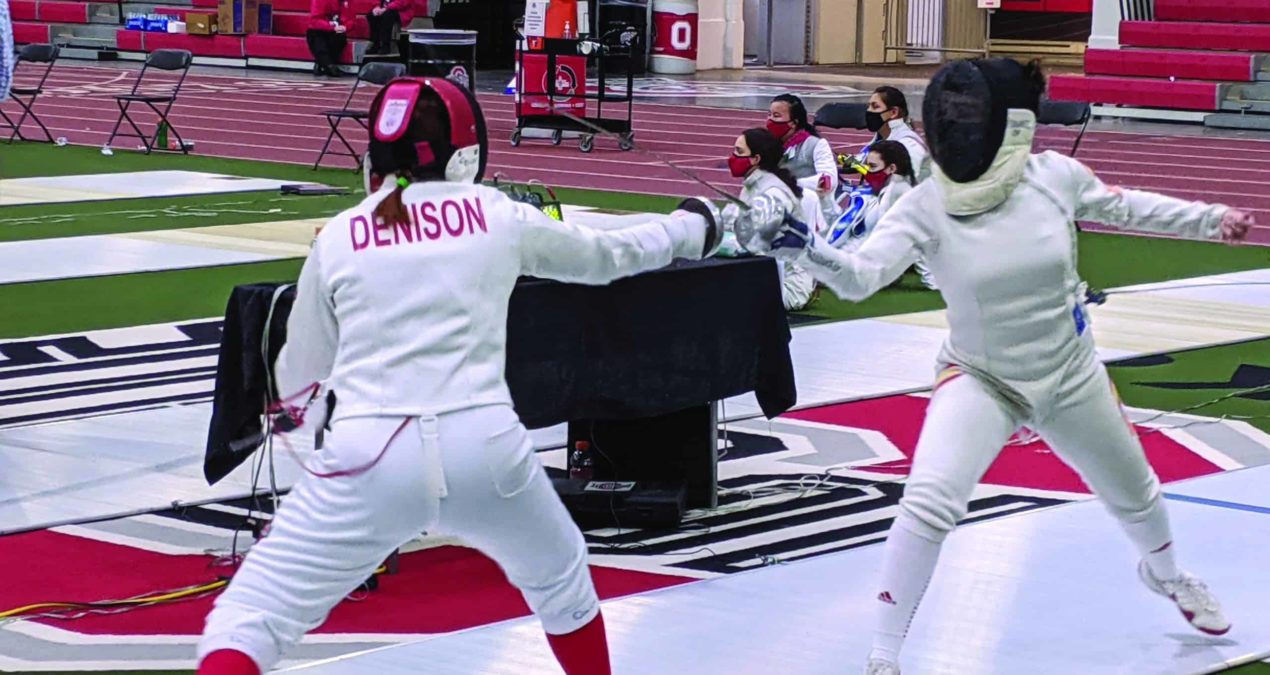 JAKOB LUCAS, Sports Editor—Fencing has seen a quick rise in popularity on Denison’s campus since Dr. Peter Grandbois, English professor and head coach of the women’s varsity team, introduced the club in 2011. The club team is open to all; for those looking for a lesser time commitment or who just want to try out fencing for fun.

“Starting next year there is gonna be tryouts because we’ve been getting a lot of walk ons and the team is getting fairly big. But up until this year people can just come and try it out” according to Wardzala.

For anyone unfamiliar with the basics of fencing, there are three disciplines: sabre, épée, and foil.

“Sabre is really quick… it’s very much you have to think before you start fencing sort of thing” says Wardzala. Awarding points involves a rule called right of way. “It depends on who parrys, or hits the blade, last, that’s how you determine who gets the point” she explains.

“Épée is very controlled, it’s very slow, methodical, you’re trying not to get hit more than the other ones… But in épée [‘right of way’] doesn’t matter. If you both hit, you both get the point. So it’s much slower and more methodical”

Finally, foil combines both sabre and épée.  Points are awarded very similarly to how they are in sabre, using “right of way”. However, hitting is done with the point of the blade, as it’s a point weapon, unlike sabre which uses the side of the blade.

Unlike many other sports teams here at Denison, women’s fencing competes at the highest level in college sports.

“We don’t compete against just Division III teams. This year, because of COVID, I think we were one of two Division III varsity teams that were allowed to compete for fencing, everyone else was Division I. We spent the season competing against basically just Division I teams.”

Finally, Wardzala notes the team’s camaraderie, despite the individualistic nature of the sport.

“We’re all very close. There’s only, I think, about 17 of us on the team, so it’s a fairly small team. So everyone knows each other, everyone’s formed connections. I would say basically everyone on the team is friends with each other.”

The team also has a high degree of respect for coach Peter Grandbois. “Our coach is the best, he spends so much time making sure everyone is the best they can possibly be and he’s really encouraging. Especially since we get a lot of walk ons, he spends a lot of time making sure people who’ve never fenced before understand and are also proud of their achievements. Even if they don’t beat these olympic fencers we often have to fence.”

As the varsity women’s fencing team’s season comes to an end, Wardzala looks back fondly on her past four years with the team and how much it’s grown since its 2011 inception.