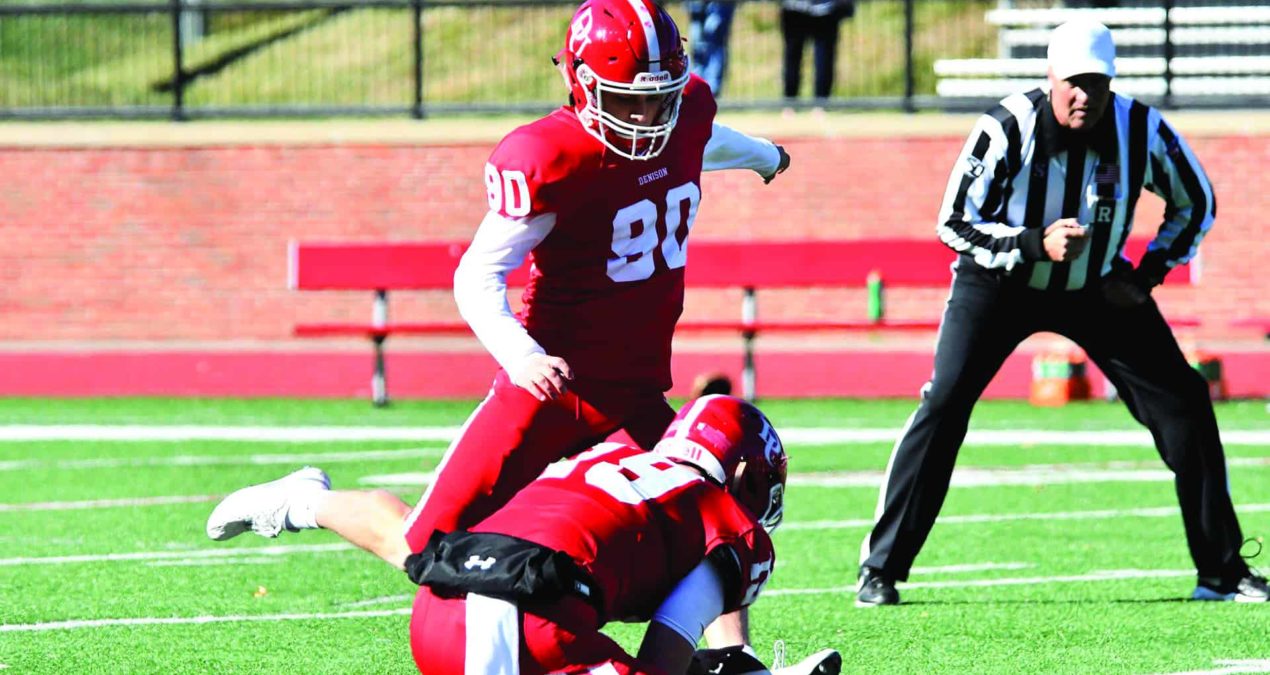 SARAH WUELLNER, Asst. Sports Editor—The varsity football team got their  first win in their first game of the season against Ohio Wesleyan University in a tight game of 38-37 on Friday night. The pandemic has put a damper on the athletics at Denison, making it difficult for athletes to rekindle the same level of passion they had before the world shut down. After the fall semester, the NCAC has allowed for teams to compete against each other and travel for competitions.

The Denison football team had their first away game for their short season this spring semester. On Friday March 19th, they traveled off campus to compete against Ohio Wesleyan. This was the first of only two games this season to make up for the cancelled fall semester season. The second and last game will be at home against Wittenberg on the Deeds Field April 3rd, 2021.

The Denisonian spoke with one of the senior captains who plays right tackle for the football team, Sean McCafferty about Friday night’s game. “It was rough at first as it was the first game of the season with basically all new coaching staff so that was a big challenge we had to overcome. We did a great job of coming together as a team and fighting our way back into the game.”

The team has been practicing since the beginning of February preparing to jump back into the season. Sean stated, “OWU is always going to be our most physical game of the year and I am proud of how we handled them on the field. Overall it was a great team win, everyone executed their job and it resulted in a win.”

The football team practiced all of fall semester and was not able to compete due to the COVID regulations set by the NCAC. They practiced plays against each other, but were not able to compete against an outside team. However, it was worth the wait after hours in the weight room and on the field, they came out victorious.

Many are wondering when spectators will be allowed in the stands to cheer on their favorite teams. Sean is excited to see fans supporting the team at the next home game, “Students and faculty will be allowed at the game and all the players get 2 tickets each so we are hoping to have a sizable crowd there. OWU had their parents and some students in the stands, but did not allow us to have any tickets. It was weird to not have any support from the stands but our sideline did a good job of making up for the lost energy.”

Although sports may look very different from previous years, the Denison varsity football team is not giving up and will continue to make progress even if they are not competing against other teams. Good luck to the team at the last home game for the season! Saturday, April 3, they host Wittenberg University.