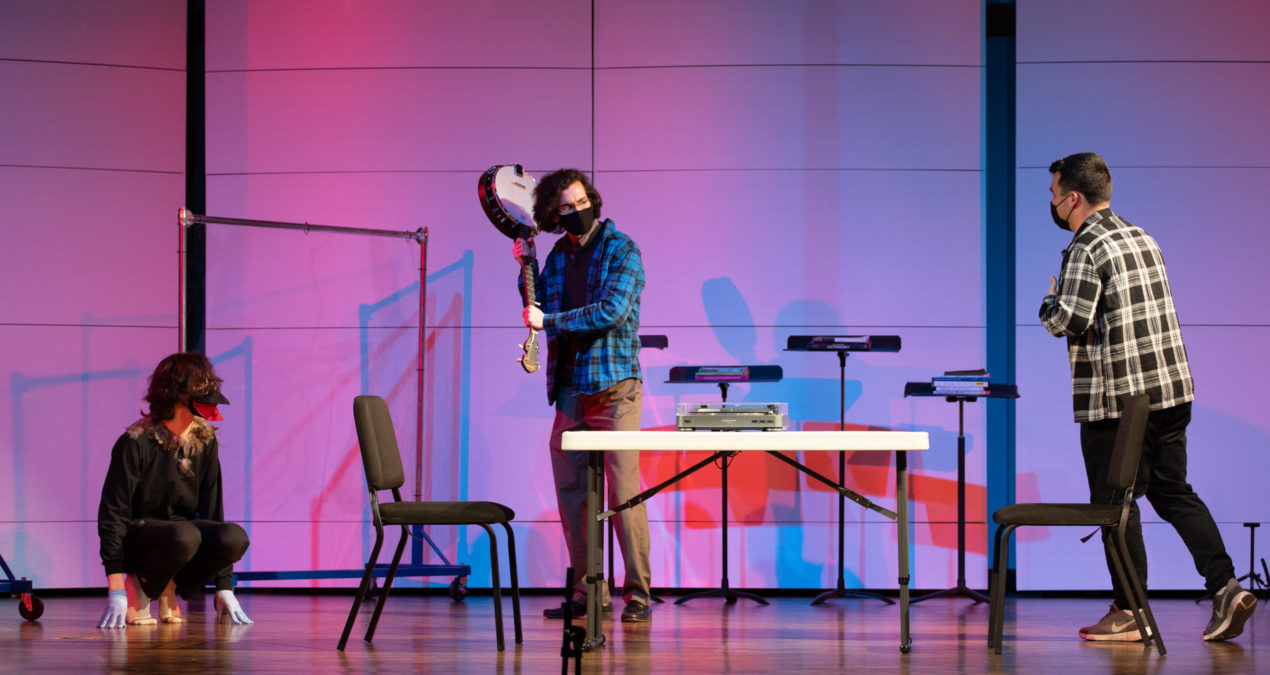 SARAH WUELLNER, Asst. Sports Editor—Adam Venrick ‘21 opened his Denison Independent Theatre Association show Bird Variations on April 2nd that played through Sunday. After Venrick was unable to stage his last production in the spring of 2020, he was overjoyed to successfully put on Bird Variations. The play consisted of three actors and two voiceover/understudy actors along with an assistant director and stage manager.

Venrick’s synopsis of his play: “Bird Variations is about two college professors and a bird. They teach a subject that is never really nailed down, it changes every time. This bird flies into their department library, Ace Morgan, while one of them is trying to write a memoir. These two professors are stuck in a time loop and it somehow involves this bird, but we’re not really sure how. The play is about them trying to figure out why they cannot get out of the time loop, while trying to get this bird out.”

Venrick wrote his play for his final in Peter Pauze’s playwriting course in Spring 2020. “My first draft of Bird Variations was like fifteen pages long and it made less sense than it does now, even now it does not make a whole lot of sense. I did a 60 page rewrite and that is the draft we ended up with.” After workshopping his script with a close theatre friend, Jordan Zelvin ‘21, he was able to present it to DITA. The play is based on two professors of the theatre department, Mark Bryan and Peter Pauze. “On a very nice spring day, Dr. Bryan was grading papers and a bird flew in disrupting his work. So he enlisted Dr. Pauze to get the bird out of the library. I think it is a great story because it shows the difference between them as people and it is inherently comedic. It is based on a story about them, but the professors in the play are not supposed to be them.” Venrick said.

Venrick normally acts in shows at Denison, but wanted to direct and write at some point. “I had never really directed anything before, I had directed a one act and a zoom play. In a way it made me feel safer to direct something I had written. It was like nobody knows how to stage this better than me, but by that same token, there is something very intimidating about directing your own play. If something goes wrong, you have nobody to hide behind. If you are taking the wheel and it does not go well, then you really feel exposed.” Venrick said,

“Even though I was not acting in it, it felt like I was constantly being watched to sit in the audience. Especially the first night, I went up to the booth because I was really nervous. I was terrified all the way through the first run because I was worried people would not like it, and I finally realized that it was going well during the scene involving the Soviet Union. We played the anthem of the USSR. There were three reactions that first night: half the people laughed, half the people gasped, and one person said ‘Oh my God!’” The show brought in a full house for the Burke Recital Hall.

Despite the challenges of COVID-19 and making sure his actors would not get put into quarantine, Venrick also dealt with a lack of funding. “We had to get creative with our props. Ultimately we ended with this very minimalistic aesthetic. I really wanted this to look realistic except for the bird, in the end nothing really looked realistic. We created this very artificial look, where every once in a while there was something realistic that sort of caught people off guard.”

After closing his show Bird Variations, Venrick will be acting and directing a couple of shows for the upcoming Fringe Festival this May.