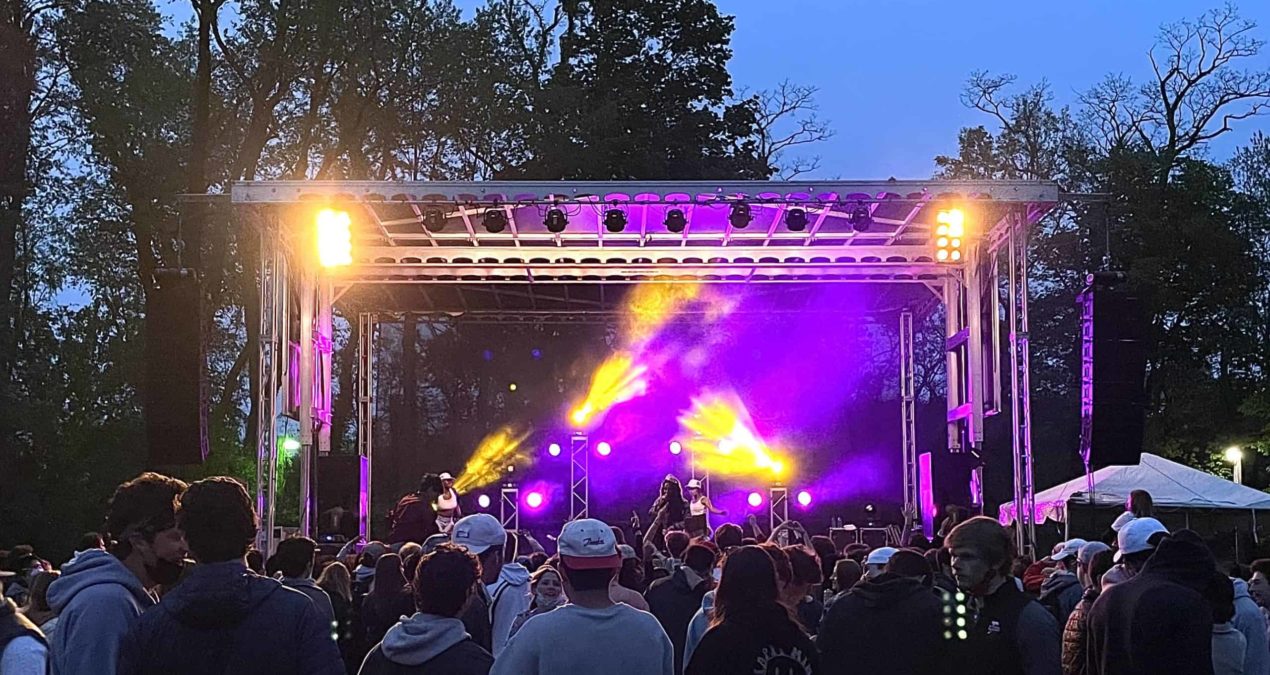 by Lula Burke
No Comments

Rappers MIKE and Princess Nokia performed at the 2021 Doobie Palooza, an annual music festival organized and operated by The Doobie. The event was held at Tower Field on Saturday, May 8 and featured several student artists in addition to the two famous rappers.

At 5 p.m., guitarist Blythe Dahlem ‘23 played an assortment of bluegrass tunes and original songs, and Adam Venrick followed with a series of songs involving singing and playing an instrument called the autoharp. Jacob Gunther ‘22 went next with a DJ set, and The Cuties wrapped up the student performances with covers of songs by Dr. Dog, Sublime and The Buttertones.

Dahlem said he was “really excited for the performance [after] the Bluegrass/American Roots ensemble’s performance” the week prior and that he “hoped [viewers] enjoyed the set.”

At 6 p.m., opener MIKE, a rapper, songwriter and record producer from New Jersey, went on stage with his DJ and performed his music, which is characterised primarily by his voice, which is monotone but precisely rhythmic, as well as his lo-fi beats and jazz influence. He called the crowd “lively” during his set and communicated with the audience.

Headliner Princess Nokia began her set around 7:30 p.m., playing hit songs such as Sugar Honey Iced Tea, Kitana and I Like Him accompanied by her two background dancers. Her music is a combination of rap, soul, house and rock music, and she led an enthusiastic, fun show. During her performance, she emphasized the importance of people in the crowd feeling “safe,” particularly women and people of color. Like MIKE, she talked to the audience, exchanged drinks and photos with people at the barricade and noted that this was her first live performance in over a year—She said that she began her career with college shows similar to Doobie Palooza, and was grateful for the crowd. Right after the show, she hit 8 million monthly streams on Spotify.

The show was regulated by members of the Doobie Palooza staff, who worked to guard entrances and exits, as well as direct student performers and do crowd control. Drinks, hotdogs, and chips were provided, and alcoholic beverages were available to students 21+ who provided state-issued identification.

Claire Anderson ‘24 worked as a crew member, and said she enjoyed her first Doobie Palooza experience.

“MIKE and Princess Nokia were insanely good performers and [were] super kind,” she said. “The whole festival had a really good atmosphere, and it was pretty sweet to be so close to the performances.”

Meredith Ehlers ‘22 works as the executive finance director of The Doobie, was a crew member for Doobie Palooza and also performed as the bass player of The Cuties.

“Performing as The Cuties at Doobie Palooza was a great experience. Having the chance to play live with the band let alone on the same stage as MIKE and Princess Nokia was unreal and it was really cool to see the campus come together for the event,” she said.