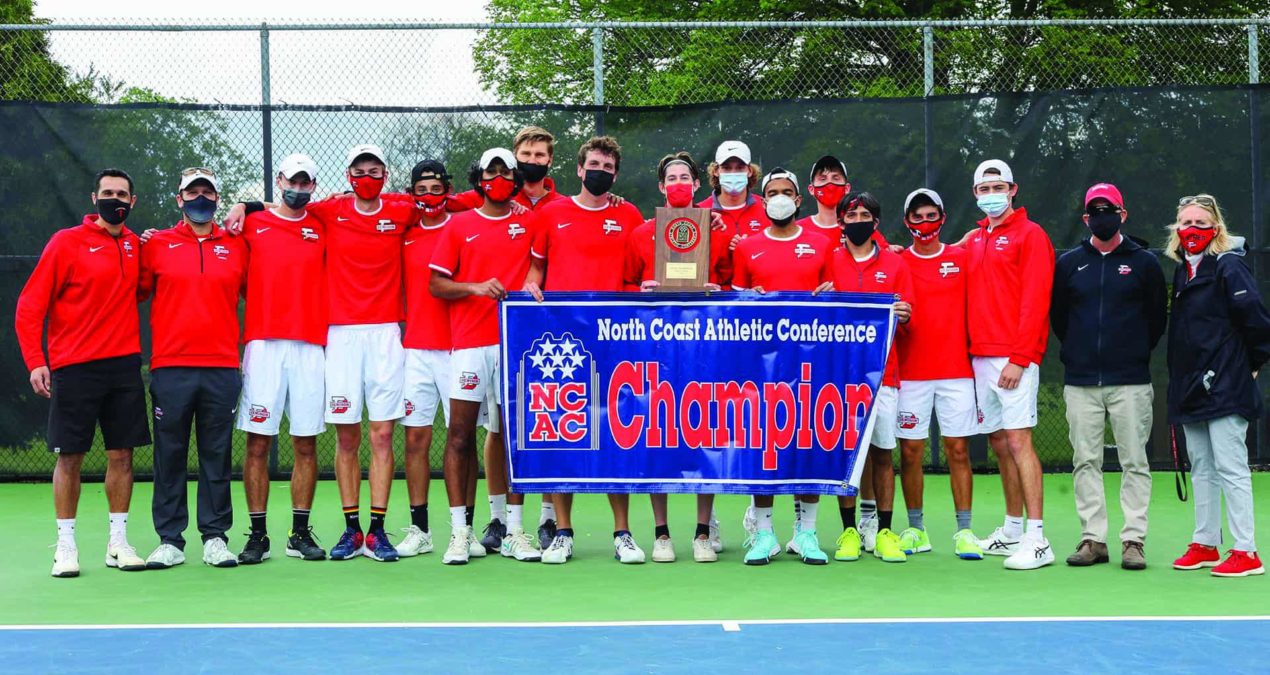 JAKOB LUKAS, Sports Editor—The last time Men’s Tennis captured an NCAC Championship was 2006. However, last Friday, May 7, that streak was broken as the Big Red swept DePauw 5-0 on the Hill to capture the title, Denison’s 13th overall.

Denison’s dominant day began with a trio of doubles victories.

In the first match of the day, Tim Cianciola ‘22 and Jack Bulger ‘23 quickly dispatched of their opponents across the net in a quick 8-3 victory, scoring Denison their first court win of the day.

Their second court victory came on court one, when Vlad Rotnov ‘21 and Patrick McGuigan ‘21 won their set 8-5.

The third, and final, doubles court saw Jacob Dennen ‘21 and Akshat Agarwal ‘22 of the Big Red taking down their DePauw counterparts in a more competitive fashion, winning in an 8-6 set.

The first two courts of singles play ended almost as quickly as they began with DU crushing their opponents.

In the first court, Daniel Garcia ‘23 won his sets 6-1 and 6-0, putting Denison one court away from clinching the championship.

In the second court, and final one of the day, Andy Mackler ‘24 defeated his opponent in an even more dominant fashion, not dropping a single game and winning in back-to-back 6-0 sets.

The other four matches went unfinished as Deinson took the championship along with their fifth court win. However, three of the four remaining courts saw Denison leading after the first set while the final one sat still in the first set, locked in even at 6-6.

As Mackler ‘24 scored the winning points, Big Red Men’s Tennis flooded the freshman’s court and the celebration immediately began as Denison became NCAC champions. This year’s Men’s Tennis team has been a resounding success, snapping not one, but two 15-year droughts. First the team defeated Kenyon College for the first time in 15 years before going on to win the NCAC championship, also for the first time in 15 years.

Men’s Tennis’ triumphant season has not come to a close quite yet. The NCAA Division III Championships await and will begin play this coming weekend, May 14-16. The first weekend will see the first three rounds of the tournament played.

At the time of writing, the full championship field has yet to be announced and Denison’s opponent is not yet known.

Check the NCAA website for more updates on the tournament.