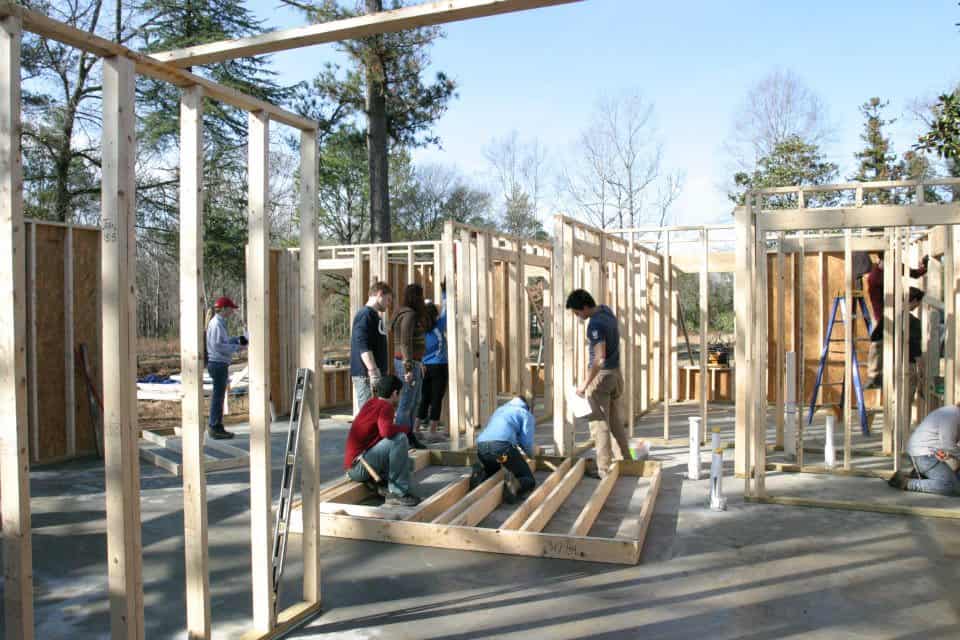 By Emily Boccardi
Special to The Denisonian

Early every Saturday morning, the volunteers of the Habitat for Humanity program at Denison University take a 20-minute ride to houses in nearby Newark or another community in central Ohio.  With smiles on their faces, the volunteers anticipate the intense work they are about to do.  But they love every second of it.

Working on run-down houses that are tattered and torn, or building a house from the ground up, these volunteers are dedicated to the work they do.  They enjoy helping the less-fortunate, especially in an area located so close to Denison, their home away from home.

The Habitat for Humanity chapter at Denison works with the international organization and the Greater Columbus Area affiliate in its mission to reduce homelessness in the world and to provide decent shelter for low-income families.  At Denison, Habitat is run by an executive board consisting of a President; Vice President; and Local Build, Winter Break, Public Relations, and Fundraising Chairs. The Habitat program at Denison does volunteer work locally in the surrounding areas of Newark and have also traveled to Rocky Mount, N.C., and Birmingham, Ala.  They are working toward alleviating poverty in these areas.

Tori Couch ‘13, President of Habitat for Humanity during 2012, a biology major and philosophy minor from Singapore, has been involved with the organization since she was in the 7th grade, including all four of her years here at Denison.  When she arrived as a first-year, Denison’s Habitat program did not have a Fundraising Chair, and Couch was able to quickly assume the position.  As Fundraising Chair, she organized the fundraisers for their longer volunteer trips.  She was recently succeeded by her younger sister, Alex Couch ‘15.

As a sophomore, the elder Couch assumed the post of Local Build Chair and coordinated all local volunteer opportunities.  She was elected President of Habitat for her junior and senior years.

“I kind of do a little bit of everyone’s job,” says Couch.  She fills in whenever she can and tries to help out whenever another member of the board needs it.  She also organizes communication with the affiliate that the Habitat program at Denison works with, the Greater Columbus Area affiliate.  Couch contacts the Habitat headquarters, Habitat International, and works on the regular everyday campus activities and events that the Denison chapter of Habitat holds.

Thacker has been part of Habitat since he was a freshman.  “Habitat is a great way to contribute productively to both my own learning in construction, organization, and leadership skills and to the well-being of others by building homes with them,” he says.

The volunteers at Denison’s Habitat program do volunteer work locally and in other cities such as Rocky Mount, N.C., and Birmingham, Ala.  Katerina Tijerina ‘13, an English-literature major and music performance minor from Beloit, Wis., coordinated local trips as 2012’s Local Build Chair. She was succeeded recently by Raymond Tinglin ‘16.

The Denison volunteers offer up their Saturdays to complete their volunteer work.  “We have done a lot of work in the Newark area and the houses we build are often the nicest houses in the areas…we do a modest job,” says Thacker.  The groups makes an effort to volunteer every other weekend, if not every weekend.  “We usually volunteer every weekend, as long as there’s a build available for us to help with,” says Couch.  There are also some trips during weeknights.

The program formally involves 50-70 students, but the number of people who volunteer more often ranges from 20 to 30. “Of those 50 to 70 people, probably 30 of them only volunteer, so we have a group of 20 to 30 people that volunteer pretty regularly and they’ll switch out every other weekend,” says Couch.

The program also finds volunteers within some of the larger groups on campus, such as fraternities and sports teams.  “They volunteer once as a big group, as opposed to our regular volunteering group,” Couch explains.  For the winter trips, the limit is 24 volunteers.  Couch claims this number is typically between 16 and 24.

Over winter break and spring break, the program travels to other states to perform Habitat work.  The Fundraising Chair, Lindsey Clark ‘15, an  English and economics major from Rye, N.Y., is responsible for managing all of fundraisers.  Clark has been involved with Habitat since her freshman year. These fundraisers help fund the volunteers’ travel.

“My position is important because it funds the winter break trip and allows Habitat to do whatever it would like without being strained financially,” Clark said.   During the current academic year, Clark planned several events to boost the travel budget.

The money the group raised from a Halloween candy sale, for example, was to fund some of their winter trip this semester.  Clark is also organizing a larger initiative called “Shack Week,” when students will create a team for $15 and then make a house out of cardboard on A Quad.  “The teams will be judged at the end of the week for creativity, durability, and other attributes,” she says.  The group also planned a carnation sale for Valentine’s Day.

With the money they have raised, the Habitat program at Denison has been able to travel to Rocky Mount, N.C., and Birmingham, Ala., over winter breaks.

Deniz Aydogan ‘14, an economics and cinema major from Cincinnati, facilitates these winter break trips as Winter Break Chair.  “My position helps provide the opportunity for Habitat at Denison to do their volunteer work across the nation, instead of being limited to our area near Denison,” he explains.  Aydogan has been succeeded by Marlen Ortiz ‘16 and Ra’Jene Martin ‘16.

In March 2011, the group had the opportunity to travel to El Salvador over spring break, the only time the project has received enough funding to travel internationally.   During these trips, they stay for the week and do as many service projects as they can.

No matter the location, the volunteer group works to fix up houses. “Whatever they need, we’ll help with that,” says Couch. One of the subtler goals of Habitat is getting involved with the families the students volunteer for.  “The reactions of house owners…are ones of appreciation.  The people that we help are some of the nicest people you will meet, and they truly believe in Habitat as well,” says Clark.

When the members arrive to the houses, they are always excited to learn how to build new things because they know that the work they are doing will improve not only an individual’s house, but their overall quality of life.

Members of the group’s leadership affirm the existential importance of their work.  Says Clark, “Everyone needs to care about Habitat because it puts your daily problems in perspective. It is simply a positive force in the universe.”