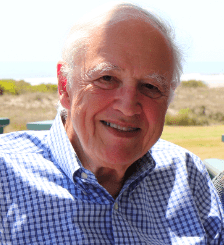 Born on January 9, 1940, in Bridgeport, Connecticut, Jeff graduated from Fairfield Prep and Fairfield University and received his doctorate in theoretical nuclear physics from Virginia Polytechnic Institute and State University.

While in Virginia, he met and married Cheryl Pearlstine who was at Hollins College in Roanoke, Virginia. He taught physics for a year at Hollins before serving for 17 years as a Professor of Physics and Director of the Computer & Technology Center at Denison University in Granville, Ohio.

In 1984, he started JCC Consulting, which has provided information technology solutions, robust and innovative software, research, and training to clients around the globe. The firm has grown and now, the participants are cherished family.

Jeff and Cheryl, while continuing work with JCC Consulting, gradually moved to Charleston and Kiawah. Jeff loved the beauty of Kiawah and the LowCountry, a good book, a good conversation, most types of music, art, and friends. As a Board member of the World Affairs Council of Charleston, Jeff enjoyed working with local high schools to spark and recognize an interest in world affairs. Jeff and Cheryl have hosted Chamber Music of Charleston concerts in their home. Jeffrey and Cheryl held season tickets to the Charleston Symphony Orchestra and Charleston Jazz Orchestra and attended most events of the Kiawah Arts Council. Jeff was also a member of Kiawah Island Turtle Patrol. In recent years, Jeff extended a long-term interest in photography and embraced it with his usual passion.

More than anything else, Jeff was a student and a teacher. He constantly explored new information and concepts and he gloried in students. He delighted to host Denison faculty and students in not one, but two eclipse parties (1971 at Litchfield Beach and 2017 in Charleston). He interviewed and encouraged every student doctor and nurse who supported him, quizzed and encouraged immigrants, and cheered anyone who was learning and advancing.

Jeff is survived by his wife of 53 years Cheryl Pearlstine Jalbert and his two grandchildren, Gwendolyn Jalbert Landeck and Eiric Jalbert Landeck. He was predeceased by his and Cheryl’s son, Kenneth Lee Jalbert, and daughter, Patricia Lynn Jalbert.

Jeffrey will be buried next to his and Cheryl’s son, Kenneth, in Granville, Ohio. Memorials are being held in both Kiawah and Granville.