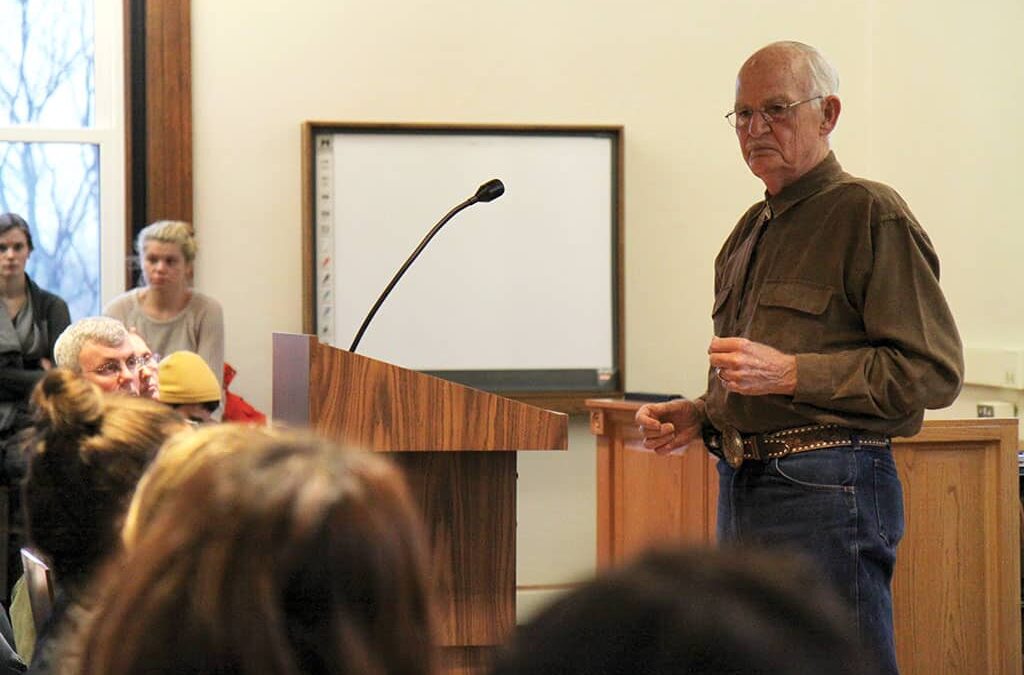 The Barney-Davis board room was filled with students, faculty, and community members waiting for a special speaker on the afternoon of Feb. 27. Not a professional lecturer, not a specialist in a particular area of study – the speaker this time was a former Ohio death row inmate wrongfully charged with murder.

Dale Johnston, a native of Logan, Ohio, was sentenced to death in 1984 for the murder of his daughter and her boyfriend. Johnston was exonerated in 1990. He has been declared wrongfully imprisoned. The State has appealed his victory, and the appeal is pending in the Tenth District Court of Appeals.

Since the release, Johnston has been speaking out against the death penalty in Ohio, Pennsylvania, New York, and New Jersey as a part of the group Witness to Innocence.

Johnston’s daughter and her boyfriend were murdered in October 1982. Their bodies were dismembered, with parts buried in a cornfield and dumped in the Hocking River.

Upon the trial, Johnston wrote to the Ohio Attorney General, asking him to take over the investigation. However, the request was turned down because Hocking County – not the state – had power over the case. The sentence was made in the lack of evidence tying him to the crime and the inaccurate testimonies against him.

“Leads without my name were thrown away by authorities,” Johnston told the crowd. Furthermore, Johnston added that interviews of witnesses were not videotaped, and he believed this allowed the prosecution to manipulate information.

Before his exoneration, Johnston served six years on Ohio’s death row. It was then determined that there was evidence withheld from the defense, as well as witnesses who were hypnotized.

According to Johnston, the police was given reports saying that his daughter and her boyfriend were seen being followed by a man who people said “was not Dale Johnston.” In 2008, Chester McKnight confessed to the murder, and is now in prison.

Johnston mentioned that he was a part of a group based at Northwestern University Law School that helped in then-governor George Ryan’s decision to abolish the death penalty in Illinois in 2000. “We met as a group in Illinois and talked about what happened in each state. There were several meetings, and we marched from Northwestern to Illinois’ death row.” The group also held press conferences, and governor Ryan would go on to stop all executions, with death sentences being converted to life sentences.

“If people are pro-death penalty, you won’t change their mind. If we can just give them enough information, and tell them not to let emotions rule, that would be an accomplishment.” A common theme in Johnston’s lecture was the importance of looking at the facts when it comes to criminal investigations, instead of reacting solely on emotion. “You’ve got to look at the facts.”

Johnston, who was pro-death penalty even before his prison time and exoneration, now believes that the death penalty should be repealed because of the risk of wrongful execution. “Mistakes are made, no matter how ethical prosecutors are. There’s no way to design a perfect death penalty system; there’s always risk of wrongful conviction.”
He adds that in Ohio, six wrongfully convicted men have been released from prison, and he wonders “have they executed any?” Johnston says that there one man exonerated for every eight executed. He also adds that he has been given no restitution from the state of Ohio, nor has he been officially declared wrongfully convicted. Johnston cites his age, nearly 80 years old, as the reasoning behind this.

When asked how the event had affected his family mourning the loss of their daughter, Johnston said that it was extremely difficult, adding that by the time he was released it had been several years since her death.
As Johnston neared the end of his talk, he called upon the young people in the room, saying that they “are the future” and that their efforts can lead to the end of the death penalty. He referenced Joseph Priestley, who invented the eraser, as an inspiration. “Everyone makes mistakes.”