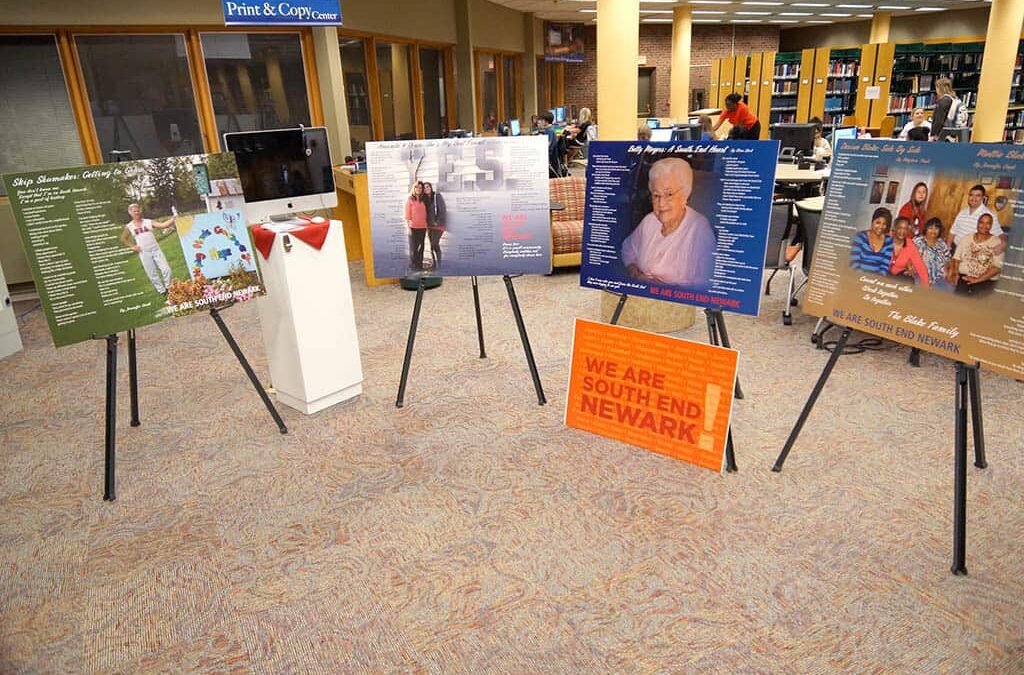 If you have been to the Doane Library in this past week, you have probably noticed the visual representations of images with poems across the second and third floor. The exhibition entitled “Who is the South End Newark?” is a creative way that associate professor and chair of the Department of Communication Amanda Gunn and the students in her senior seminar “Communication and Culture” course introduced a few of our South End Newark neighbors to the Denison community.

“In the 21st century, we don’t take the time to stop and find out who are the human beings living in neighborhoods that on the outside look like they are in deterioration,” said Gunn, who lead the initiative. “Stereotypes and rumors replace the knowledge that can be gained from a conversation.”

In the interest of and commitment to building connections, Professor Gunn and the students in her class sat down in the kitchens and living rooms of 34 residents from South End Newark, holding in-depth interviews.

“The peoples’ lives that are presented here live in an area with a deep and rich history known as The South End. It is an area that shows the wear and tear of the last thirty years of downsizing, outsourcing and economic recessions,” explained Gunn. “Many of us have driven through without paying much attention, on our way to somewhere else.”

“I’ve had an incredible experience,” said senior Communication major Jenny Cook, who was one of the 12 seniors in professor Gunn’s senior seminar class. “This is probably the most rewarding thing I’ve done in my Denison career academically. It was a very unique and cool experience.”

Gunn and Cook also added that they were most struck by the answers of all the participants when they were asked about their idea of the American Dream.

“Not once did they talk about money or material goods,” added Cook. “ It was all about peace, love, and happiness. It made me reevaluate my idea of the American Dream.”

The idea to present the interviews through poetry followed the guidelines of Laurel Richardson’s method of Poetic Representation. The poems reflected the wording “in the order in which they appeared in the transcripts without any additions. We were able to take words out, repeat words and or manipulate the visual presentation of the words in the interests of conveying the themes and emotions central to the interview,” explained Gunn.

Digital artist Laurie MacKenzie-Crane, Director of Educational Technology Anne Crowley, and the students in her “Technology and Education” course collaborated in the production of the exhibit by creating shorter podcasts from the interviews.

“Our goals was to create a sense of awareness,” said Cook. “To ground people in the world that they are living outside of the Denison bubble… I just hope people take the time to stop by to look at the exhibit.”

The exhibit will remain on display at the William Howard Doane Library until April 22.