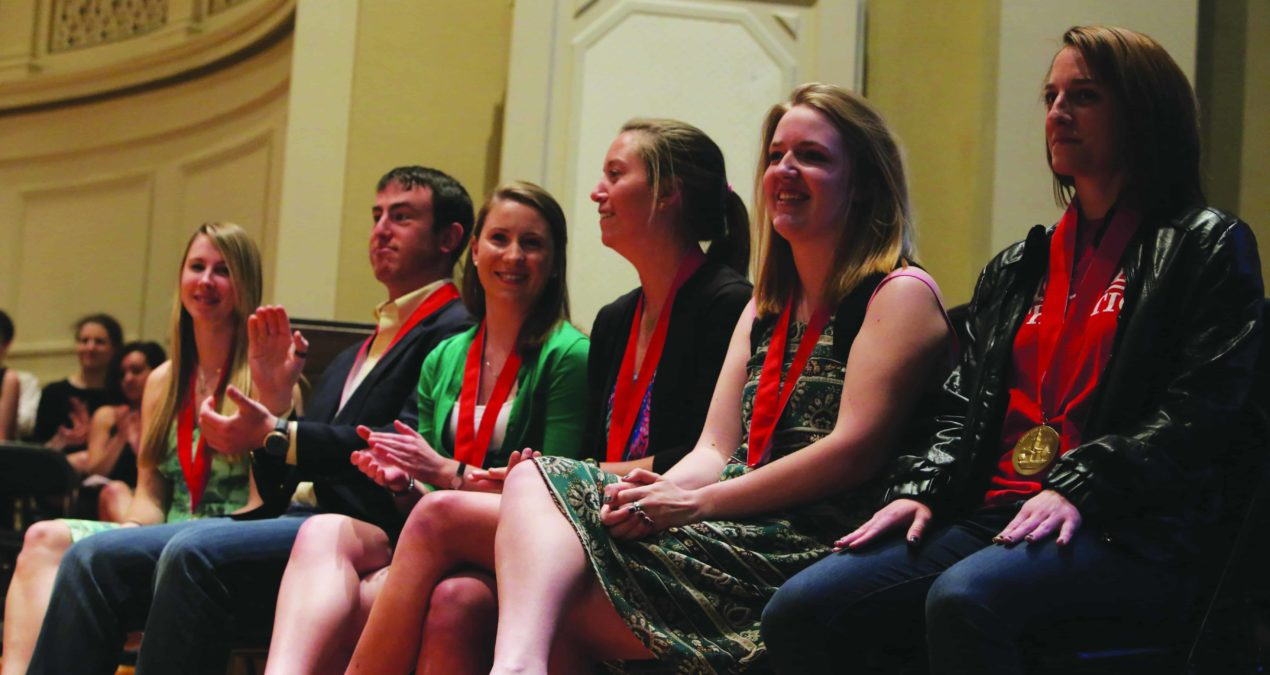 Students with 12:30 p.m. classes on Friday, April 24 were probably more than pleased to find out that class was cancelled for the Academic Awards Convocation.

While all students are encouraged to attend, most probably used the extra hour of their day to grab lunch, catch up on homework or start their weekend early. However, those students who made their way to Swasey Chapel for the convocation were met with an inspiring ceremony honoring our university’s finest faculty and students.

President Adam Weinberg commenced the ceremony during a speech in which he described the convocation as “[the] day we celebrate the best in teaching and learning.” The convocation also featured a performance by Denison’s ensemble-in-residence, ETHEL, who sported Denison apparel for the occasion.

After their performance, the crowd hushed with anticipation for the awards to come. First, President Weinberg presented the new endowed chairs and professors of the university: Dr. Dan Gibson, Dr. Jim Davis, Dr. Dan Homan and Dr. Hanada Al-Masri. Then Chair of the Black Studies Department and Professor of English Linda Krumholz and Professor of Physics and Astronomy Steven Doty were awarded with the Charles A. Brickman Excellence in Teaching Awards.

The next awards to be presented were the national scholarships including Benjamin Gilman Scholarships for study abroad, Critical Language Scholarships, Davis Project for Peace Awards and Fulbright Scholarships. Ankita Henry ‘15 was among one of the students to receive a Fulbright Scholarship, and President Weinberg had the privilege of delivering this news to her on stage. Henry said, “I was so taken aback, it was a while before I saw him waving at me and realized I was supposed to go on stage! I don’t think there could have been a better way to get the news.”

After a performance by the Chamber Singers, the moment the crowd had been waiting for finally arrived: the presentation of the President’s Medals. The recipients of this award are kept a secret until the convocation and are, therefore, highly anticipated. This year the medals went to Allison Scarlott ‘15, Christopher Martin ‘15, Megan Worden ‘15, Whitney Powel ‘15, Emma Bosley-Smith ‘15 and Julie Rooney ‘15.

The medals are awarded on the basis of intellectual achievement with some combination of service to the community, contribution to the arts, enlargement of our global perspective, athletic involvement, leadership and contributions to community discourse.

Following the announcement of each medalist, Dr. Nestor Matthews gave a concise speech about each outstanding student. Matthews’ remarks highlighted each student’s individual importance to the Denison community.

Powel, a Communication and Environmental Studies double major described the moment she received her medal: “As I was walking down the aisles of Swasey Chapel…I was not looking ahead to the podium, but rather I was looking around to my professors, friends, teammates, and classmates in the pews, smiling and cheering me on. It is this consistent support that has helped propel me in all of my Denison experiences.  To be honored on Friday was truly amazing, but being a Presidential Medalist made me realize even more of how lucky I am to be a part of a community that has, at each turn, helped me grow and succeed.”