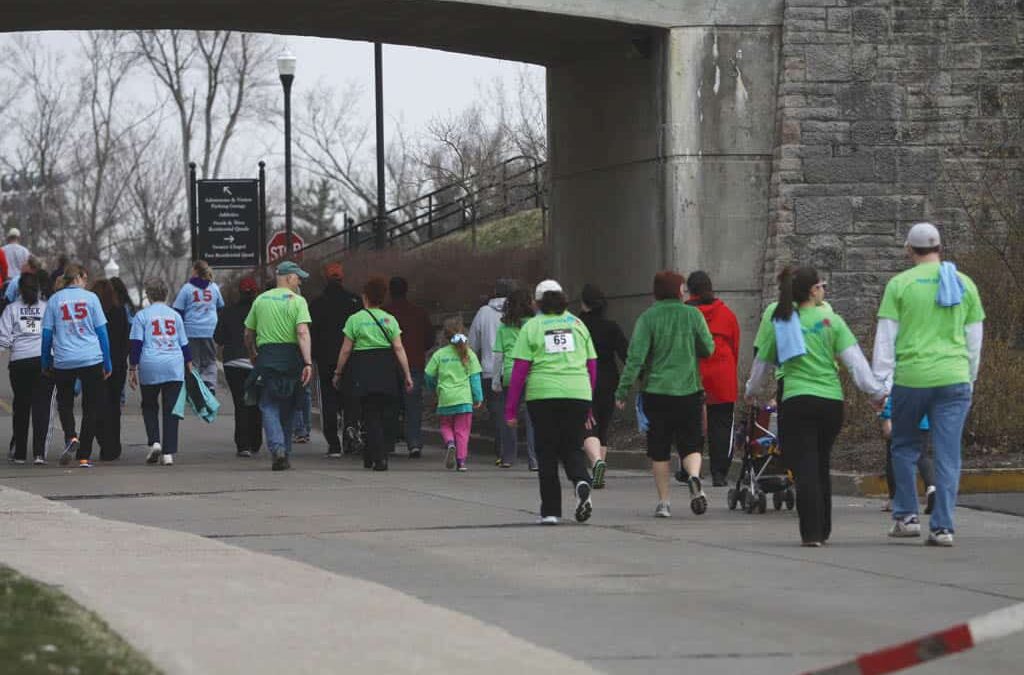 A beautiful day calls for a beautiful purpose, and that is just what drove many of Denison and Granville residents to partake in the 5Knobel on Sunday morning, commemorating the life, legacy and legend of President Dale T. Knobel.

“We had over 300 participants. The sun rose with a red, brilliant sky allowing perfect weather,” says Nancy Carney-Debord, “We had faculty, staff, students, and many from the Granville community.”

The proceeds from this event benefits the Allison Knobel Sitton Scholarship Fund and the Janet Gregory Benefit Fund.

And while this morning was an inspriring one, the week brings promise for Denison and the surrounding community as Division III week steamrolls on.

“It was a wonderful ‘kick off’ to a week of events that will bring awareness to the quintessential Division in the NCAA,” adds Carney-Debord.

As apart of Divison III week, on Tuesday the Baseball team will be having a community night while they face off against Capital University. This community night will please visitors with an abundance of hot dogs and hot cocoa. The game starts at 7 p.m.

As a bonus, the women’s lacrosse team will also be selling shirts and promoting awareness about brain cancer on behalf of Elizabeth’s Hope, a fundraiser started for former denisonian, Elizabeth Minter, who died from the disease late last year.

On Thursday, the annual Varsity Cookout will be in Reese-Shackelford at 11 a.m.  Lunch and T-shirts will be given out to all Denison student-athletes. Later on that day, the Big Red baseball team will play Muskingham at 6 p.m.

On Saturday, hot dogs and hot chocolate will again be provided for a baseball double header starting at 1 p.m. Then, men’s lacrosse takes on Wittenberg at 7:30 p.m. offering free popcorn for all of the beautiful Big Red faithful attending.

Starting in 2010, DIII week was created  to inspire pride and recognition for all student athletes who compete at the DIII level.

From the early morning runners of the 5k Knobel to the last pitches of the men’s Saturday night baseball match, Division III week hopes to achieve a unifying and cohesive feeling amongst not just student athletes, but the University as a whole.

Not only will attendees of the events be peppered with t-shirts and free food, but they will get to cheer on their clssmates, friends and neighbors. In addition, they will become an active member of an ever-growing community.

DeBord explains, “We have a very strong ‘internal’ community, but to merge with the community of Granville is essential. Having community support helps one celebrate the highs of achievement and survive life’s darkest challenges.”